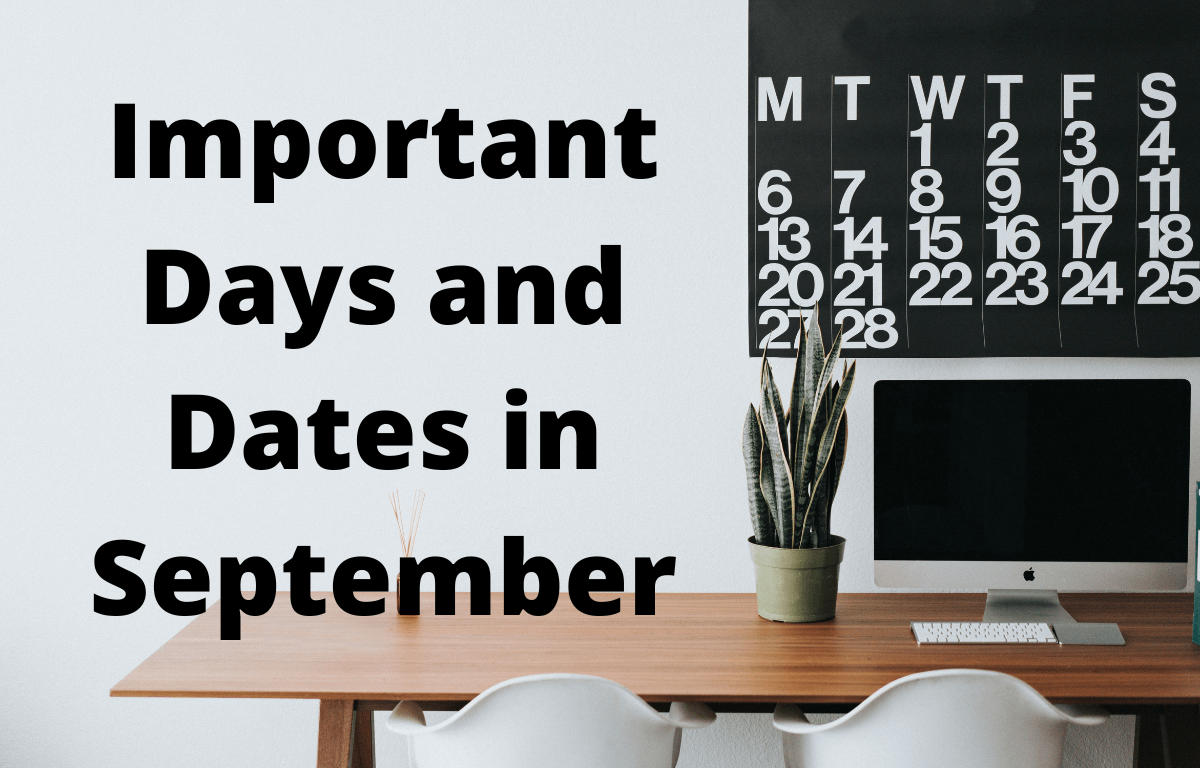 Many competitive examinations including UPSC Civil Services, SSC, NDA, CDS, PSC, or even Banking Exams require proper preparation in the General Knowledge section. Following the trend of questions asked in the exams, a lot of questions are asked from the Important Days and Dates section, so the aspirants must be well aware of the days, their significance, and when the days were originally celebrated. Adda247 has come up with a complete list of special days and dates in September 2022. The candidates preparing for the Government Jobs must go through the below list and check the significance of the important days in September 2022 and check the special days in September.

Here, comes the list of most important days in September 2022 and why they are important.

Check the details below :

To make people aware and understand the significance of nutrition, every year National Nutrition Week (NNW) is celebrated from 1st to  7th of September annually by the Food and Nutrition Board under the Ministry of Women and Child Development, Government of India. With the aim to improve the overall nutritional status POSHAN Abhiyan, 2018-2022 was introduced to minimize child under-nutrition and low-birth by 2% a year and anaemia across all age groups by 3%.

Every year, September 2 is celebrated as World Coconut Day. The theme of World Coconut Day 2021 is “Building a Safe Inclusive Resilient and Sustainable Coconut Community amid COVID-19 Pandemic and Beyond”. It is one of the most popular fruits consumed in the world. This day also commemorates the formation day of the Asian Pacific Coconut Community (APCC). The aim of celebrating this holiday is to bring coconuts into the spotlight and recognize their importance and benefits — not just health-wise but economically too.

September 3 was chosen for Skyscraper Day to commemorate the first master architect of high-rise buildings, Louis Sullivan known as “Father of modern Skyscrapers”, who was born in Boston on 3 September 1856. Sullivan worked in Chicago with William LeBaron Jenney, engineer of the first steel-framed 10-story building, the now-demolished Home Insurance Building. Skyscrapers have become pretty commonplace in modern times, and National Skyscraper Day is our golden opportunity to appreciate these architectural marvels and feats of engineering.

In India, Teachers’ Day has been celebrated annually on September 5 since 1962 to mark the birthday of the country’s former President, scholar, philosopher, and Bharat Ratna awardee, Dr. Sarvepalli Radhakrishnan, who was born on this day in 1888. From giving us a purpose to setting us up as successful citizens of the world, teachers inspire in us a drive to do well and succeed in life and to recognise this hard work of our mentors and gurus, Teachers’ Day or Shikshak Divas is celebrated in India with great pomp and show.

The International Day of Charity serves to increase and enhance social responsibility across the entire world, increasing our support for charitable causes. The date of 5 September was chosen in order to commemorate the anniversary of the passing away of Mother Teresa of Calcutta.

Brazilian Independence Day is celebrated on 7 September every year. It is also known as Sete de Setembro. Brazil won its independence from the Portuguese on September 7, 1822. Brazil abandoned the monarchical government in 1889 and switched to a republic, although it preserved the 7th of September as its Independence Day.

Every year on September 8th, International Literacy Day is commemorated to raise awareness of the importance of literacy, which is undeniably a question of dignity and human rights. Let us tell you that it is an important component of the United Nations’ Sustainable Development Goals. The theme of world literacy day 2021 is “Literacy for a human-centered recovery: Narrowing the digital divide”.

Every year on September 8, World Physical Therapy Day is commemorated to give physical therapists from all over the world a chance to raise awareness about the vital role their profession plays in enhancing public health and well-being.

The date 11 September has historical significance and due to this, the date was chosen as National Forest Martyrs Day. In 1730, on this day, over 360 people of the Bishnoi tribe led by Amrita Devi, objected to the felling of trees. Due to their protest of saving the trees, they were killed in Khejarli, Rajasthan on the orders of the king.

The National Day of Service and Remembrance, often known as 9/11 Day, is observed this year on its 20th anniversary. In remembrance of those lost and hurt on September 11, 2001, the day offers an opportunity to assist others.

This year it is observed on September 11. It is also celebrated in various other countries on different dates. As the name suggests, the day celebrates the beautiful bond between grandparents and grandchildren.

Hindi Diwas is celebrated on 14th September in India to commemorate the date 14 September 1949 on which a compromise was reached during the drafting of the Constitution of India on the languages that were to have official status in the Republic of India.  Hindi comes under the most spoken language in the world.

Engineer’s Day is observed in several countries on various dates of the year. In India, the birth anniversary of Sir M Visvesvaraya is celebrated as Engineer’s Day since 1968 as a tribute to a great engineer who helped in building some of the architectural marvels, including the Krishna Raja Sagar dam in Karnataka.

In 2007 the United Nations General Assembly resolved to observe 15 September as the International Day of Democracy with the purpose of promoting and upholding the principles of democracy and invited all member states and organizations to commemorate the day in an appropriate manner that contributes to raising public awareness.

World Ozone Day is observed on September 16 every year to spread awareness among people about depletion of the Ozone Layer and find possible solutions to preserve it. The ozone layer protects life on earth by absorbing the UV rays of Sun.

World Patient Safety Day calls for global solidarity and concerted action by all countries and international partners to improve patient safety. The World Patient Safety Day 2021 theme is “Safe maternal and newborn care”. The day is observed on 17 September. It was established by the 72nd World Health Assembly in May 2019, following the adoption of resolution WHA72.6 on ‘ Global action on patient safety’.

Every year, International Red Panda Day is celebrated on 18th September to spread awareness regarding yet another species that is near extinction. The day was launched by the Red Panda Network in 2010, and the first international red Panda day was celebrated in September that very year. Since then, the need to continue honoring the day has only increased due to global warming and climate change.

Every year on September 18, World Bamboo Day is marked as a day of celebration to raise global awareness of bamboo. Bamboo has been an everyday usage wood in areas where it grows naturally, but its use does not seem to be sustainable owing to exploitation.

This unique day came to life after two friends started giving pep talks to each other during a game. If you’ve ever wanted to be the “Ruler of the Seas” or be a fearsome pirate like Davy Jones.

The International Day of Peace, also officially known as World Peace Day, is a United Nations-sanctioned holiday observed annually on 21 September. The UN General Assembly has declared this as a day devoted to strengthening the ideals of peace, through observing 24 hours of non-violence and cease-fire.

World Rose Day, celebrated on September 22, is a ray of hope for cancer patients all around the world who are facing the big ‘C. ‘ An arduous and prolonged struggle awaits those who choose to fight cancer. The day is celebrated in the memory of 12-year-old Melinda Rose from Canada who was diagnosed with Askin’s Tumour, a rare form of blood cancer.

The UN General Assembly has proclaimed 23rd September as the International Day of Sign Languages in order to raise awareness of the importance of sign language in the full realization of the human rights of people who are deaf.

26th September: Day of the Deaf

International Week of the Deaf is celebrated annually across the world during the last full week of September since 2009. The UN General Assembly has proclaimed as the International Day of Sign Languages in order to raise awareness of the importance of sign language in the full realization of the human rights of people who are deaf.

It was first observed in 2007 on 26 September by ten international family planning organisations to spread awareness about contraception and to help couples to make informed decisions about starting a family, so that every pregnancy is wanted.It is a birth control method required to prevent unwanted pregnancies.

World Environmental Health Day is observed on September 26. MAEH has brought together environmental health professionals across the globe to discuss the theme “Prioritizing Environmental Health for Healthier Communities in Global Recovery”. This year’s theme is ‘Only One Earth’, which draws our attention towards playing our role effectively while living in perfect harmony with nature – without proving a burden on it.

World Rivers Day is celebrated on the fourth Sunday of September every year to increase public awareness about rivers and to encourage their conservation. The day celebrates Earth’s waterways, in which over 60 countries participate every year. River enthusiasts from around the world came together to organize the inaugural WRD event. That first event in 2005 was a great success and Rivers Day was celebrated across dozens of countries.

World Tourism Day has been held on 27 September each year since 1980. With the theme of “Rethinking Tourism”, the international day of observance will this year focus on re-imagining the sector’s growth, both in terms of size and relevance. The purpose of this day is to raise awareness on the role of tourism within the international community and to demonstrate how it affects social, cultural, political and economic values worldwide.

World Rabies Day is observed on September 28. A global health observance started in 2007 to raise awareness about rabies and bring together partners to enhance prevention and control efforts worldwide. 28 September also marks the anniversary of Louis Pasteur’s death, the French chemist and microbiologist, who developed the first rabies vaccine.

World Heart Day is celebrated every year on 29 September. The day is observed to spread awareness about cardiovascular diseases. The aim of World Heart Day is to inform people around the globe that heart diseases are the world’s leading cause of death and highlight the actions that need to be taken for prevention and control.

International Day of Awareness of Food Loss and Waste is observed on September 29. It is an opportunity to call to action both the public (national or local authorities) and the private sector (businesses and individuals), to prioritise efforts and initiatives to cut food loss and waste to enhance efficient use of natural resources, mitigate climate change and support food security and nutrition.

International Translation Day is observed on 30 September every year. This day provides an opportunity to pay tribute to the work of language professionals. It also plays an important role in making nations together and strengthening world peace and security.

World Maritime Day is observed on September 30.  The theme of world maritime day 2022 is ‘New technologies for greener shipping’, reflecting the need to support a green transition of the maritime sector into a sustainable future while leaving no one behind.

Adda247 is dedicated to help every aspirant preparing for a government job with different means of study material, quizzes, Practice sets, and Subject Video Solutions.

Ans. Teachers’ Day (Dr. Radhakrishnan’s birthday) is observed on the 05th of September.

Ans The World Ozone Day is celebrated on 16th September every year.

Q4. World Literacy Day is observed on which date?

Ans. World Literacy Day is observed every year on 08 September.

Q5. World Maritime Day is observed on which date?