Here we will discuss the neighbouring countries of India in detail. 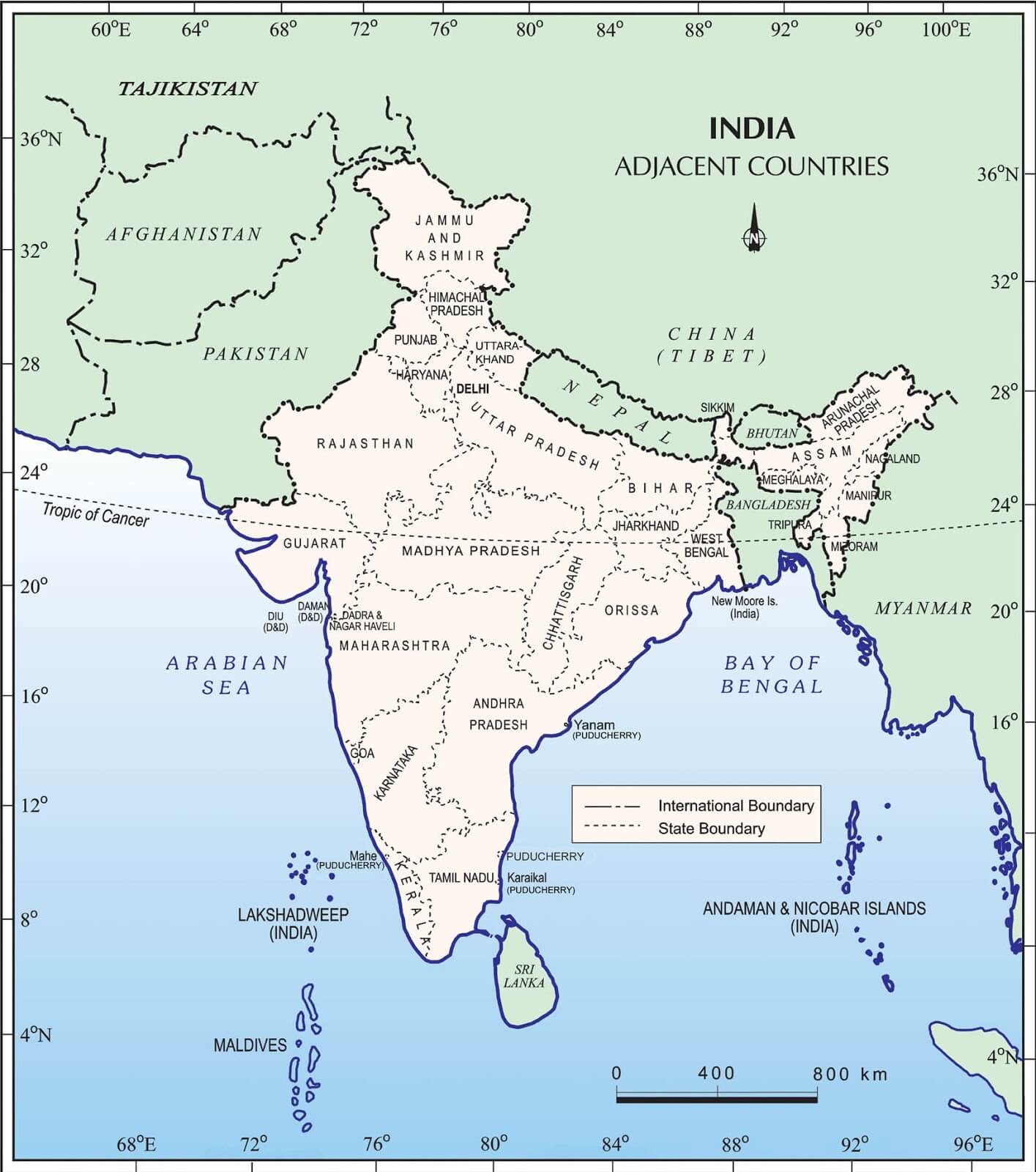 India is marked by a diversity of exquisite physical features. India has 7 major physical divisions as given below.

India has land border of 15,106.7 Km and a coastline of 7,516.6 Km including island territories. India has the third-largest international border in the world after China and Russia, and also the most sensitive border of the World with respect to extreme climatic conditions and other physical features.

Let us now discuss each of the neighbouring borders of India in details. The “neighbouring countries of India” topic forms a very important part in a number of competitive exams as well as in many interviews.

Afghanistan is located in Central Asia with an area of 6,52,230 sq km. The capital of Afghanistan is Kabul. Afghanistan is also known as the Islamic Emirates of Afghanistan or Jamhouri Afghanistan.  Islam is the predominant religion in the country and agriculture is the main occupation of its economy. It is famous for the manufacturing of cotton textile, woollens, woven carpets and handicrafts.

The Kingdom of Bhutan shares a border with the Indian states of Arunachal Pradesh, Sikkim, Assam, and West Bengal. It is spread over an area of 38,394 sq km. The capital of Bhutan is Thimphu. A majority of the population follows Buddhism followed by Hinduism. The country has a parliamentary form of government and hence is a constitutional monarchy. Besides the monarch, it has a prime minister who holds the executive powers of the nation. Hydropower, agriculture, forestry, and tourism are major contributors to the economy of Bhutan.
Bhutan is the smallest neighbouring country of India.

Myanmar was called formerly called Burma. It is located in the western portion of mainland Southeast Asia. In 1989 the country’s official English name, which it had held since 1885, was changed from the Union of Burma to the Union of Myanmar. Myanmar has an area of  6,76,578 sq km and is the largest of the Mainland Southeast Asian states. Naypyidaw is the capital of Myanmar.
In 2005 the government began to shift its administrative center, first to the city of Pyinmana and then to the present capital being Nay Pyi Taw (Naypyidaw). Earlier the capital of Myanmar was Yangon (Rangoon). The country is governed by the presidential republic with a bicameral legislature.

Nepal, officially known as the Federal Democratic Republic of Nepal is a landlocked country in the northeast part of India situated amidst the snow-clad Himalayan Range. The capital of Nepal is Kathmandu. Nepal is not a very large country in terms of its size and spans over an area of 1,47,181 sq km. Out of the world’s 10 tallest peaks, eight are located in Nepal including the world’s highest mountain peak the Mount Everest. Tourism is one of the most significant features of the country. The government is a federal parliamentary republic.

Pakistan is located to the west of India with a coastline along the Arabian Sea and the Gulf of Oman with its capital being Islamabad. The total land area of Pakistan is 7,96,095 sq km. The head of the state is the ceremonial head of the country. Pakistan was separated from India after India got its independence in 1947 from British rule. Pakistan celebrates its Independence Day on August 14, 1947.
After Independence, Pakistan was formed into two territories i.e. East Pakistan and West Pakistan. These two territories were geographically and culturally apart from each other. After a long conflict between these two, in 1971 a civil war occurred resulting in the formation of a new country what is known today as Bangladesh. West Pakistan lying on the northwest of India became the Republic of Pakistan and East Pakistan became Bangladesh.

Sri Lanka is officially known as the Democratic Socialist Republic of Sri Lanka. It lies near the southern area of India and is separated by Palk Strait. Sri Lanka has two capital, the commercial capital of the country is Colombo where on the other hand Sri Jayewardenepura Kotte is its legislative capital of the country. The president is the chief of state and the head of government in Sri Lanka.

The Maldives is an island country situated in the southwest of India officially the Republic of Maldives. The capital of Maldives is Malé. If we look at the smallest countries in the world in terms of area, then the Maldives surely falls into that category. It is spread over 298 sq km only.  The Maldives has more than a thousand coral islands (more than 1200). It is a presidential republic and the president is the head of the state.

Capital of Neighbouring Countries of India

The list that is given below depicts the list of the countries, their capitals, and their national flags with which India shares its borders. These are the countries that are the neighbouring countries of India that add up to the economy of India in terms of tourism, commercial activities or trade, and of course diversity.

Q. Name the highest peak of the world and where is it situated?
Ans. The world’s highest mountain peak is Mount Everest. It is situated in Nepal.