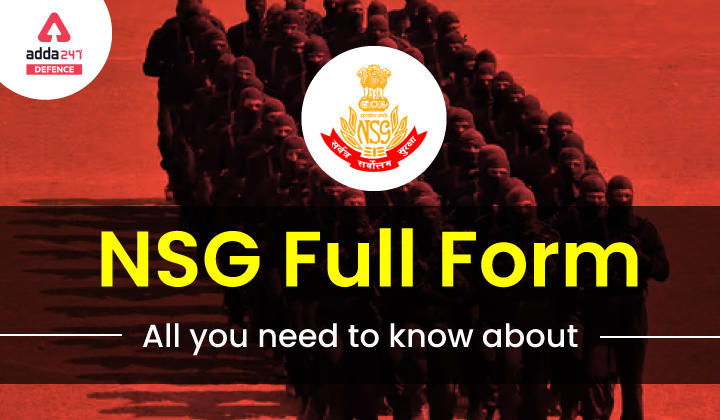 NSG Full Form: NSG stands for the National Security Guard,they are the deadliest and supersmart commandos and definitely are the pride of India . they adorn country with their supreme bravery and spirit and hence are adept for countering the Terrorism, it works under the Ministry Of Home Affairs (MHA).

They are famous by  the name of BLACK CATS owing to their black uniform and black insignia . their Headquarter is at Mehram Nagar, Palam.

The Deadly Force has always came victorious ,and is afraid of no obstacle making their motto 100% significant which says ‘Sarvatra Sarvottam Suraksha‘.(omnipresent omnipotent security) , and Black Cats have showed us many Times in History that they are Invincible

It was the year of 1984 ,insurgency was prevailing in country ,the demand for Khalistan was high and Operation Blue Star was in action ,there was collateral damege to the Golden Temple and contry saw several military and civilian casualities,, looking at the conditions which were worsening , the NSG was established  .and since then it is actively guarding the areas of prime concern.

Operation Black Thunder: The golden temple was cleared and handed over to the police without any casualities

Operation Black Hawk: Executed  in the  in the Mand area of Punjab. In this operation two terrorists were killed

Operation Ashwamedh: A hijacked plane was rescued in Amritsar airport and the hijeckers were killed .

Operation Black Tornado and Operation Cyclone: To capture terrorist and save hostages during mumbai attacks

the list is very long ,but everytime Black cats undertook a mission they made history.

NSG commandos undergo a 14 months training in Manesar ,Haryana and it is one of the hardest training of the world with a dropout rate of 70 to 80 %. Physical fitness training has 26 elements, ranging from a cross-country obstacle course to jumping from heights and across divides and scaling different kinds of terrain. One endurance test involves martial arts, target shooting at the end of an obstacle-ridden cross-country run. and after that a rigorous psychological test is taken and then finally a person becomes a Black Cat Commando .

The head of NSG, designated as Director General (DG), is selected by the MHA-Home Minister.

Since its raising in 1984, the NSG has had 28 DGs, in 31 years, with an average tenure one year and few months. According to the NSG web site, it is modeled on the British Special air Service as well as Germany’s GSG 9 (Grenzschutzgruppe 9 or “Border Guard Group 9”).

Ans. National Security Guard is the full form of NSG.

Ans. the National Security Guard is a special unit of the Indian Special Forces under the Ministry of Home Affairs

Q4. What is the qualification for NSG?

Ans. A minimum of 3 yrs in Indian Army & 5 yrs in case of Police service Experience is necessary.

Ans. Shri M A Ganapathy has assumed the charge since 18 march 2021.

Is NSG part of Indian Army?

What is the qualification for NSG?

A minimum of 3 yrs in Indian Army & 5 yrs in case of Police service Experience is necessary.

Who is the head of NSG?

Shri M A Ganapathy has assumed the charge since 18 march 2021.

Ans. National Security Guard is the full form of NSG.