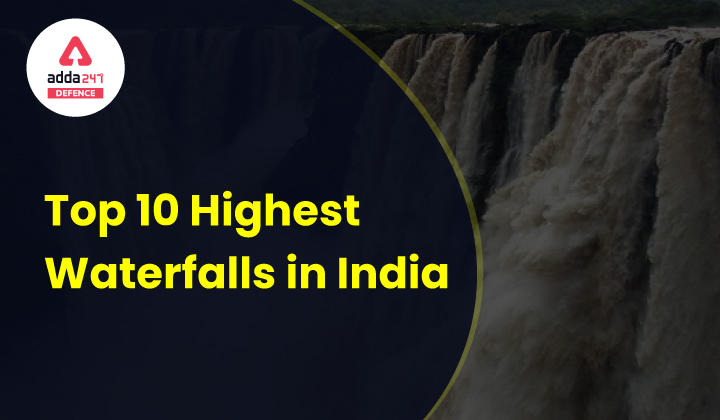 “Waterfalls are exciting because they have power, they have rainbows, they have songs, and they have boldness and craziness!” – Mehmet Murat ildan,

The Kunchikal falls is the highest waterfalls in India and second highest in Asia. The tallest waterfall of India with a height of  1,493 ft is located near Agumbe in Shimoga district of Karnataka. Agumbe valley is among the places in India that receive very heavy rainfall and it has the only permanent rain forest research station in India.

The most significant feature of these falls is that they serve as a primary source of major hydroelectric projects that are operational in the state of Karnataka. The beautiful Barkana Falls and the South Canara Coast can be viewed from Kunchikal Falls.

The Barehipani is a picturesque waterfall situated in the core area of Simlipal National Park in Mayurbhanj district of Orissa. This waterfall is second highest waterfalls of India with a height of 712 ft.

The gorgeous fall is surrounded by deep forest which again adds the wildness to its beauty. One of the most interesting thing about this famous waterfall in Odisha is its two drop that descends from a wife cliff with a height of 399 m where the tallest drop ranges 259 m.

Cherrapunji is very famous for Hills, rainfall, living bridges and oranges. The Nohkalikai waterfalls is one of the best places to visit in Shillong that truly apt for the much misused title, ‘dangerously beautiful’.

The Nohsngithiang Falls at Meghalaya is one of the largest waterfalls in East Khasi hills district of Meghalaya. The falls formed immediately after the confluence of the diverged streams from a height of 1,033 ft.

segmented into seven different sections, giving it the epithet of Seven Sister Waterfalls. The scintillating waterfall is seasonal and plunges over the limestone covered hills only during the rainy season.

The Nohsngithiang Falls or the Seven Sister Falls is symbolic of the seven sister states of the North East of India namely Assam, Arunachal Pradesh, Manipur, Nagaland, Tripura, Mizoram and Meghalaya.

The mesmerising waterfall cannot be entered into but creates a spectacular viewpoint to view the surrounding beauty of Mawsmai. The beauty of Nohsngithiang Falls is indescribable during sunset when the rays of the sun fall on it creating a perennial rainbow, which is also one of the major highlights of the place.

Dudhsagar waterfalls or The Sea of Milk is well renowned for its spectacular trajectory. Dudhsagar is the fifth highest waterfall in India falling from a height of 1020ft.

Dudhsagar falls is obviously one of the most popular falls in the country and a great tourist attraction of Goa apart from its exotic beaches.

The elephantine falls gathers the attention of many tourists and nature lovers who come from all over the country to witness the waterfall’s glory. It’s a great day trip near Goa.

Kynrem Falls is situated inside a beautiful park known as Thangkharang Park,another popular attraction of Cherrapunjee in East Khasi Hills District of Meghalaya.

The fall spreads out in two different streams or rivulets with each of them gaining momentum by getting merged while flowing down the last leg of the third tier.

The source of this fall originates from Thangkharang Park.

Meenmutty waterfalls is the tallest water falls in Kerala and also one of the most beautiful waterfalls, falling from a height of some 980 ft in Wayanad district of Kerala. It is one of the famous tourist spot in south India.

The peak is famous for its wilderness and Meenmutty Falls is the largest and most spectacular waterfall in Wayanad.The waterfall is a divided into three tires, each measuring a length of 300 feet. Streams of the water gain its fierce strength during the months of monsoon.

Thalaiyar waterfalls also known as rat tail falls situated in Dindigul district of Tamilnadu. It is one of the biggest water fall form a height 974 ft and one of one of the tallest falls in Asia. The widest falls is very popular for its dangerous place and dark caves.

The spot is still unexplored because there is no road to reach here.This refreshing water falls is one of the highest falls in not just India but entire Asia with 975ft sheer drop.

It is one of the widest as well with vicinity that ranges from 13th km on the Ghat road to Kodai.

Agumbe in Shimoga district is surrounded by thick forest of Western Ghats and known as Cherrapunji of the South India.

The Jog water falls created by the Sharavathi river in sharavathi valley of Shimoga district in Karnataka. It is the second highest plunge waterfall in India, The falls are major attractions for tourists and is ranked 36th in the list of free-falling waterfalls, Its breathtaking spectacle when Sharavathi river falling from a height of 829 ft.

It is the most impressive and one of the highest plunge waterfalls in India.Associated with the waterfall is the nearby Linganamakki Dam across the Sharavati River

Q1.Which state has the highest number of waterfalls in India?

Ans. Indian state of Tamilnadu has more waterfalls than any other states.

Q2.Which is the highest plunge waterfall in India?

Ans. Nohkalikai Falls is the highest plunge waterfall in India

Q3.Which is the longest waterfall?

Ans. Angel Falls is  the longest waterfall in world.

Which state has the highest number of waterfalls in India?

Indian state of Tamilnadu has more waterfalls than any other states.

Which is the highest plunge waterfall in India?

Nohkalikai Falls is the highest plunge waterfall in India

Which is the longest waterfall?

Angel Falls is  the longest waterfall in world.