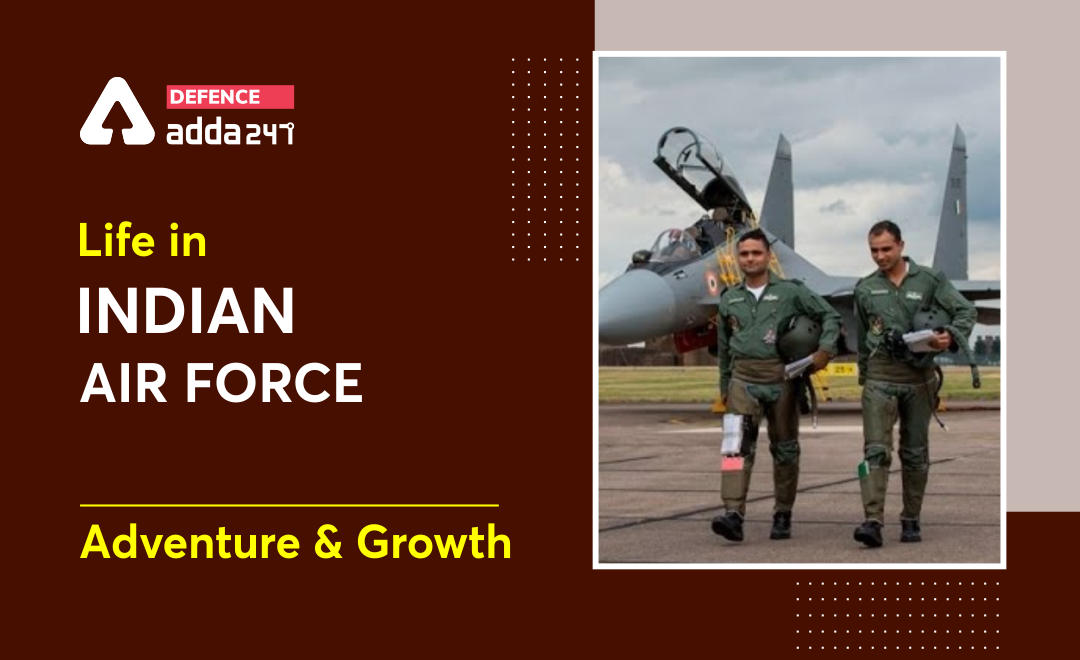 Life in Indian Air Force: The Indian Air Force is the air arm of the Indian Armed Forces. Its complement of personnel and aircraft assets ranks fourth amongst the air forces of the world. Its primary mission is to secure Indian airspace and to conduct aerial warfare during armed conflict. The President of India holds the rank of Supreme Commander of the IAF.
Direct Link to Apply for AFCAT 1 2022
Working in the Indian Air Force makes you sufficient and shows you not to substitute words for activities, not to look for the way of solace, but rather to confront the pressure and face the trouble and challenge, to figure out how to stand up in the tempest. It gives you a temper of the will, nature of the creative mind, a force of the feelings, power of mental fortitude and a hunger for experience over the adoration for ease.

Certain Core values are ingrained into Air Force Officers during their training. Most people would have heard of loyalty, duty, respect, service, honour, integrity and courage but as warriors , you learn them and from then on, live them everyday in everything you do – whether on job or off.
As an Officer, a warrior, in the Air Force, you’re tasked with upholding the constitution and protecting India’s freedom. The responsibility is enormous, but its not only about work its also about living well. Quality of life is an important attribute of Air Force life and has no parallel in the civil sector. The life offers you challenge, adventure, excitement, honour, prestige, self respect, content family life, safety and security for self and family and not to forget the social status, respect and esteem of your countrymen.
Besides being a noble service to the motherland and an honourable profession to be proud of, life in the IAF gives variety, adventure and challenge. It provides best of facilities be it recreation, sports, medical, education or clubs and institutes. The lifestyle imbibes in us a healthy well being and a regime for life. The quality time we are able to spend with our family, social bonding with our counterparts, lifetime relations we nurture and the all willing, all time support from the extended family have boundless value.

The Indian Air Force has a long standing tradition of fostering the spirit of adventure. Be it the lofty heights of Himalayas or the mysterious depths of the ocean, vast expanse of the sky or closed confines of caves, Indian Air Force Personnel have been the pioneers of adventure activities in all these spheres. Adventure primarily constitutes an essential component of military training. It helps in developing a sense of purpose, determination, courage and perseverance against all odds. Adventure activities develop faith in ones abilities and leadership qualities, which are essential for day to day functioning during peace and for victory in war.
The IAF, plays a stellar role in promoting adventure activities among the air warriors. It deals with a broad spectrum of Terrestrial, Aqua and Aero sports. In every individual there is, indeed, an inherent need for excitement of all groups of adventure. When one looks back, it is this fervent need that has lead us to venture out and cross new frontiers, leaving indelible imprints in the history of civilisation. Living on the edge, albeit for a short span of time, enables one to discover one’s own latent potential and this platform is what, the IAF provides.
As an Officer in the Air Force, you could activate your adventurous self and enjoy undertaking any of the activities organised by the IAF. These activities include.

As an officer in the Indian Air Force, the sky is the limit for you. You start your career as a Flying Officer and can rise up to the rank of Air Marshal. The chosen one from the Flying Branch becomes the head of the family i.e. The Chief of the Air Staff. Rank structure for commissioned officers are:

Air Chief Marshal: The top of the rank for the best of the best from the flying branch. The Air Chief Marshal heads  the Air Force family and is responsible for all strategic and tactical decisions in times of peace and war.

Air Commodore(Air CMDE): An Air Commodore is the next rank and as a Principal Director, you may command a large Air Force Station, or hold Staff Appointments (Senior Level) at Air HQ/Command HQ.
Air Vice Marshal(Air Vice MHSL): Only the daring few climb this high in the Air Force hierarchy. An Air Vice Marshal is responsible for taking strategic decisions.
Air Marshal(Air MSHL): Just one step below the top of the ladder, the Air Marshal commands a lot of power.

Squadron Leader (SQN LDR): Taking on bigger responsibilities under yourwings, the Squadron Leader undertakes many tasks. Now you are a senior level supervisor.
Wing Commander(WG CDR): Gearing up for the higher grounds the Wing Commander, the next higher rank, takes on additional responsibilities.
Group Captain (GP CAPT): Taking charge of men and management, you as a Group Captain may command a medium-sized Air Force Station or be an important link in decision making mechanism at various IAF formations.

Flying Officer (FG Officer): Taking off a career in Air Force, this is the first rank an officer wears after successful completion of the training.
Flight Lieutenant (FLT LT): Beginning the climb, Flight Lieutenant is the next rank in the Indian Air Force hierarchy, where you play an important role as a member of a cohesive team.
As one journeys on, the realms of adventure provide rich treasure trove of memories to share with and learn from, to reminisce and dream on. The IAF aims to encapsulate all these unique experiences, and more importantly, be an instrument that would help in nurturing and channelizing the talent and indomitable spirit of youth.