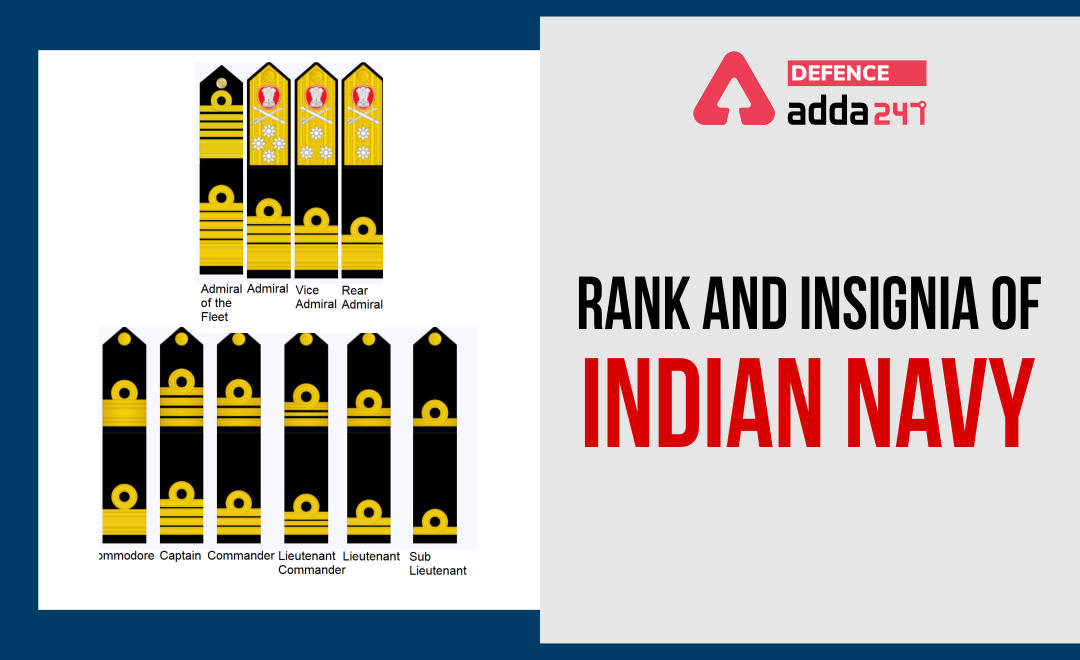 Indian Navy Ranks and Insignia: The profession in Indian Armed Forces is a unique vocation of experts who are entrusted to defend the Constitution and the rights and interests of India. More than an indication of pay grade, the ranks provide a system of leadership that indicates a Soldier’s level of expertise, responsibility and authority inside that profession. Regardless of rank, every Soldier has a significant role in the force.

Ranks provide a system of leadership that indicates a Soldier’s level of expertise, responsibility and authority. As they say in Indian armed forces ” You wear your heart on your sleeve and your resume on your uniform“. Rank defines a soldier while Insignia is a distinguishing mark and a badge of authority or honor. Each wing of the Indian Armed Forces has a specific Insignia. In this article, we will discuss the rank and insignia of Indian Navy.

Indian Navy Ranks and Insignia are discussed in decreasing order of priority below.

ADMIRAL OF THE FLEET

Also known as Fleet Admiral. Admiral of the Fleet is an honorary five star rank of highest order. In many nations, the rank is reserved for wartime or ceremonial appointments. No officer of the Indian Navy has yet been conferred this rank.
The title admiral of the fleet can trace its origins to the Middle Ages, where the title was typically granted to a nobleman who was appointed by a monarch to raise and command a navy for a specific campaign.

The Vice Chief of the Naval Staff (VCNS) is second in command of the Indian Navy. The office is held by a Three-Star Officer in the rank of Vice-Admiral. He is responsible for the operation of naval-related tasks.

A Rear Admiral in the Indian navy is a senior and two star rank naval officer, appointed in higher Naval commands.The rank insignia for a rear-admiral is two stars beneath crossed sword and baton, all surmounted by Emblem of India, worn on shoulder boards.

Traditionally, “commodore” is the title for any officer assigned to command more than one ship at a time, even temporarily, much as “captain” is the traditional title for the commanding officer of a single ship even if the officer’s official title in the service is a lower rank.

As an official rank, a commodore typically commands a flotilla or squadron of ships as part of a larger task force or naval fleet commanded by an admiral.

This rank is equivalent to “Colonel” in Indian Army and “Group Captain” in Indian Air Force.

Commander is a common naval and air force officer rank. Commander is also used as a rank or title in other formal organisations, including several police forces.

It is rank earned after getting commissioned into the force from the academy. It is equivalent to Lieutenant in Indian Army and Flying officer in Indian Air Force. 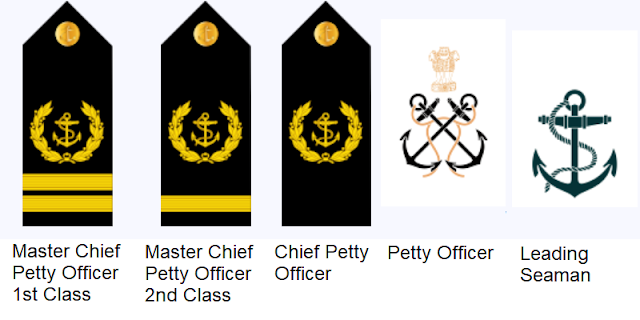 A petty officer is a non-commissioned officer in the Indian Navy, equivalent to the NATO rank enlisted grade of OR-5.

This rank is equivalent to “subedar” in the Indian Army and “warrant officer” in Indian Air force.

This rank is equivalent to “Naib subedar” in Indian Army and “Junior warrant officer” in Indian Air force.
NON COMMISSIONED OFFICER
PETTY OFFICER
A petty officer is a non-commissioned officer in the Indian Navy, equivalent to the NATO rank enlisted grade of OR-5.

Leading Seaman is a junior non-commissioned rank or rate in the Indian navy and other Commonwealth countries. When it is used by NATO nations, the Leading Seaman has the rank code of OR-4.

An ordinary seaman (OS) is a naval rating of the deck department of a ship. The position is an apprenticeship to become an able seaman and has been for centuries. This rank is equivalent to sepoy in the Indian Army and Airmen in the Indian Air force.