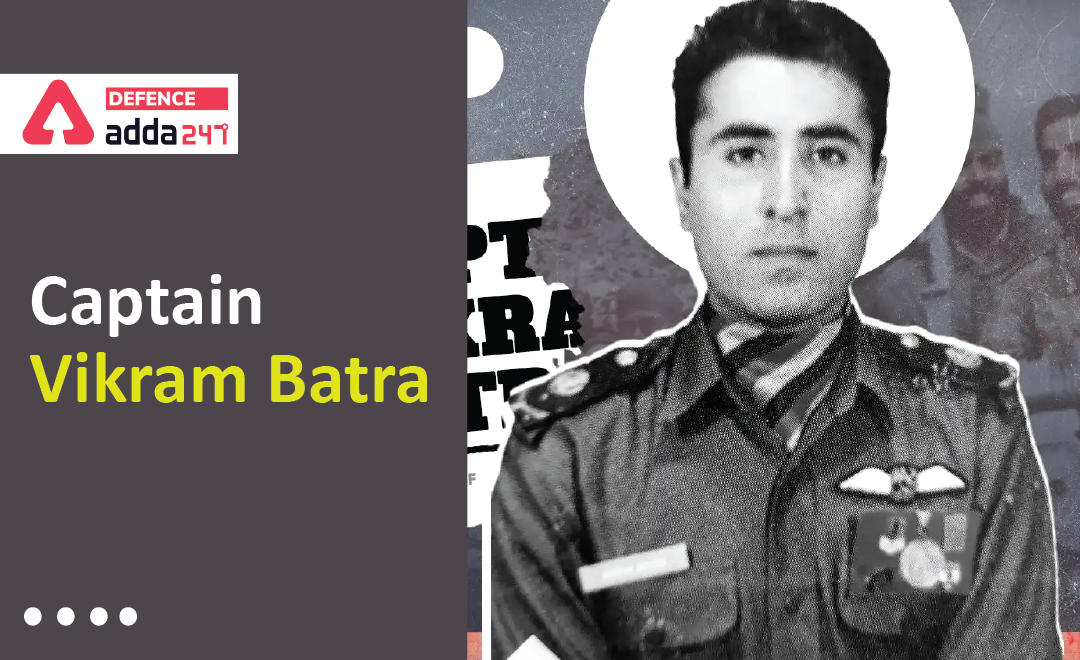 Captain Vikram Batra fondly called “luv” was born on 9th September 1974 in Palampur, Himachal Pradesh. Besides being brilliant at studies, Batra was a keen sportsman and represented his school at the national level during the Youth Parliamentary competitions at Delhi.

He also was a green belt holder in Karate and went on to attend a national-level camp in Manali. He qualified for the ‘C’ certificate in the NCC and attained the rank of Senior Under Officer in his NCC unit while studying in DAV College, Chandigarh. He was selected and took part in the Republic Day parade as an NCC cadet.

In 1996, he passed the CDS examination and subsequently got recommended for Indian Army from SSB Allahabad. He was among the top 35 candidates in the Order of Merit. After completing a year (session 1995—96) toward the degree of MA in English, he left the University to join the Indian Military Academy, Dehradun.

In the words of his father,
“Vikram had found his purpose in life. He had found the way to a righteous path that would lead him to his goal to a service that was extraordinarily high and supreme.”
Batra joined the Indian Military Academy (IMA) at Dehradun, in June 1996 in the Manekshaw Battalion. He passed out from the IMA on 6 December 1997 and was commissioned as a lieutenant into the 13th battalion of the Jammu and Kashmir Rifles (13 JAK Rif). After commissioning, he was sent to Jabalpur, Madhya Pradesh for regimental training.

On completion of the regimental training, his first posting was at Sopore in Baramulla district of Jammu and Kashmir, an area with significant militant activity.

In mid-March 1998, he was sent to the Infantry School at Mhow, Madhya Pradesh, where young Army officers are trained, for the Young Officer’s Course. This training lasted five months until September 1998. Following completion of the course and being awarded alpha grading, he joined his battalion in Sopore in October 1998.

In January 1999, Batra was sent on a Commando Course at Belgaum, Karnataka where he excelled. The course lasted for two months and at the end of it, he was awarded the highest grading – the Instructor’s Grade.

In 1999, when Kargil War broke out, Vikram had just completed a Commando Course at Belgaum and got leave to celebrate Holi with his family at his home Palampur. Soon after, Vikram’s unit received orders to move to Kargil and he reported for duty on June 1, 1999.

Eighteen days later, on June 19, 1999, he was ordered to recapture Point 5140 in his first major battle in the war. On 18 June, the battalion carried out a detailed reconnaissance of Point 5140. It revealed that the enemy had put in place seven sangars on the feature; two on the top, four towards the east and one towards the north.

It also revealed that the eastern approach to the feature was comparatively easier than that from the front, which had a near vertical climb, dominated by the top, though it was also more heavily defended. It was decided that the assaulting troops must capture the Top before dawn, or else the enemy would inflict maximum casualties on them.

Batra decided to approach the hill from the rear, aiming to surprise the enemy and to cut off their withdrawal route. Batra fired three rockets towards the bunkers on the east side of the feature, before attacking them.

He and his men ascended the sheer rock-cliff, but as the group neared the top, the enemy pinned them on the face of the bare cliff with machine gunfire. Batra, along with five of his men, climbed up regardless and after reaching the top, hurled two grenades at the machine gun post.

Batra then killed three enemy soldiers single-handedly in close combat. He was seriously injured in the process but insisted on regrouping his men to continue with the mission. He continued to lead his troops and then charged at the next enemy position, capturing Point 5140.

In all its actions, his company killed at least eight Pakistani intruders and recovered a heavy anti-aircraft machine gun. The remaining enemy soldiers fled.

Elated that all his men had made it alive, Vikram famously told his commander at the base – “Ye Dil Maange More”- using the popular slogan of Pepsi’s ad campaign to express his desire to do more.

Vikram’s next operation was one of the most difficult mountain warfare campaigns undertaken during Kargil – the capture of the 17000 feet high Point 4875. The icy slopes of this peak were 80-degree steep with dense fog and Pakistani troops had positioned themselves at the height of 16000 feet.

Vikram Batra codename was “Shershah” and as they say, even the Pakistan army knew who shershah was. On the night of July 7, Vikram and his men began their tortuous climb to fortify the Indian force which was already fighting the invaders at 16,000 feet. The enemy got wind that the formidable Sher Shah had arrived and intensified their attack, raining mortar and automatic fire from above.

The mission was almost over when a junior officer injured his legs in an explosion. As Vikram rushed out of the bunker to rescue him, his subedar begged him not to go and said he would go instead. But Vikram told him: “Tu baal-bacchedar hain, hat ja peeche ”.

Under heavy fire, he hurled grenades at the enemy’s machine gun post and killed five soldiers in close combat while moving towards the injured lieutenant. He had just reached and was lunging to lift his mate when he was hit by a bullet in his chest. Mortally wounded, On 7th July 1999 Vikram passed away as a hero going home. Peak 4875 is known as Vikram Batra Top now.

For his sustained display of the most conspicuous personal bravery and leadership of the highest order in the face of the enemy, Captain Vikram Batra was posthumously awarded Param Vir Chakra – India’s highest award for gallantry in battle.

During ‘Operation Vijay’, on 20 June 1999, Captain Vikram Batra, Commander Delta Company was tasked to attack Point 5140. Captain Batra with his company skirted around the feature from the East and maintaining surprise reached within assaulting distance of the enemy.

Captain Batra reorganized his column and motivated his men to physically assault the enemy positions. Leading from the front, he is a daredevil assault, pounced on the enemy and killed four of them in a hand-to hand fight.

On 7 July 1999, in another operation in the area Pt 4875, his company was tasked to clear a narrow feature with sharp cuttings on either side and heavily fortified enemy defences that covered the only approach to it. For speedy operation, Captain Batra assaulted the enemy position along a narrow ridge and engaged the enemy in a fierce hand-to-hand fight, and killed five enemy soldiers at point-blank range.

Despite sustaining grave injuries, he crawled towards the enemy and hurled grenades clearing the position with utter disregard to his personal safety, leading from the front, he rallied his men and pressed on the attack and achieved a near-impossible military task in the face of heavy enemy fire. The officer, however, succumbed to his injuries.

Inspired by his daredevil act, his troops fell upon the enemy with vengeance, annihilated them and captured Point 4875.

Captain Vikram Batra, thus, displayed the most conspicuous personal bravery and leadership of the highest order in the face of the enemy and made the supreme sacrifice in the highest traditions of the Indian Army.