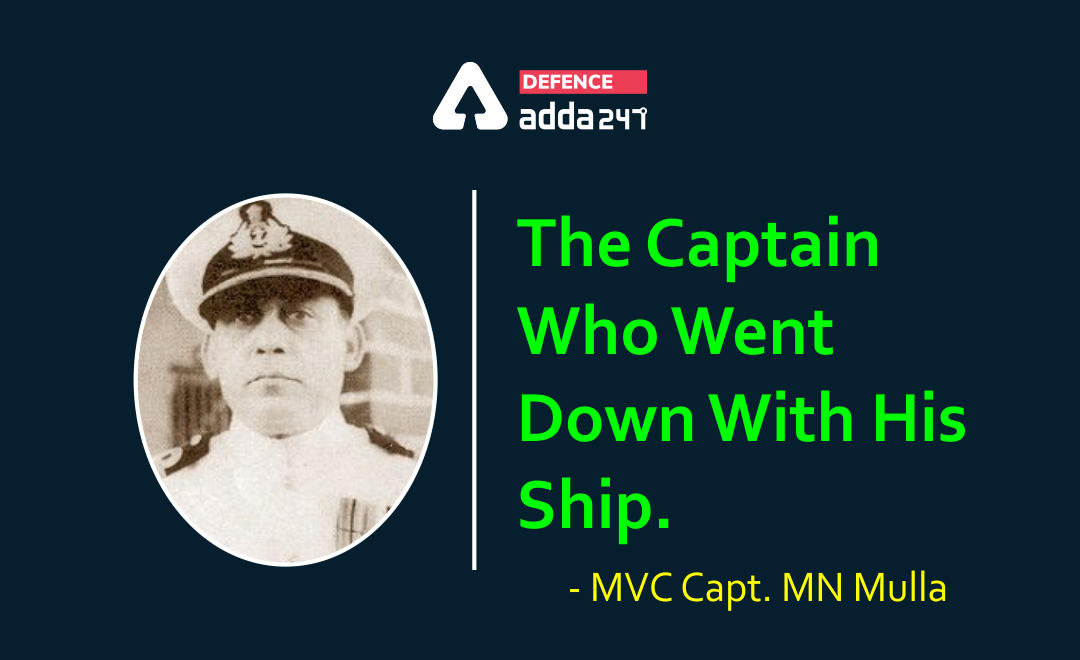 Captain Mahendra Nath Mulla was born on the 15th of May, 1926 in Gorakhpur in Uttar Pradesh. He belonged to a lawyer’s family wherein his father Sri Tej Narain Mulla was a judge in the High Court and his elder brother a lawyer. When Capt Mulla was young, he too had interest in the profession of law, but as he grew older his interest veered towards the Armed Forces. At the age of 20, he passed the intermediate exam and was commissioned into the Indian Navy on May 1, 1948. During his tenure in the navy, Capt Mahendra Nath Mulla was described as an excellent defence counsel in courts-martial proceedings in the service.
Capt Mulla was trained for four years in the UK and on his return, he served as an executive officer of a minesweeper. He served on board INS Krishna for three years. Capt Mulla held various important appointments during his service career which included, Officer-in-Charge of Naval appointments at Naval Headquarters, Deputy Naval Adviser to the Indian High Commissioner in London for three years and executive officer of naval shore establishment INS Angre at Bombay. He also served as commanding officer of the destroyer INS Rana besides a tenure at Naval Headquarters in the Directorate of Naval Plans. In February 1971, he joined INS Khukri and took over as Captain of the ship.

When the Indo-Pak War of 1971 broke out, Capt Mulla was commanding a task force of two ships in the Western Fleet. The task force had the responsibility of hunting and neutralizing enemy submarines in the North Arabian Sea. The Indian Naval radio detection equipment identified a submarine in the vicinity of Diu harbour on 03rd Dec 1971.  Following this, INS Khukri along with two other ships INS Kirpan and INS Kuthar were dispatched to take on the threat of the enemy submarine.
In the late evening of 9th December, INS Khukri was attacked by the Pakistani submarine PNS Hangoor which fired torpedoes at it, causing devastating damage. What made the Indian vessel an easy target for enemy torpedies was the presence of an experimental sonar equipment aboard that had been specially deployed for research.
The limitations placed by this equipment had drastically slowed down the movement of the Khukri to the submarine-detectable speed of 12 knots. Also, Khukri‘s sonar set could detect only up to 3,000 yards and it was no match to the Hangor that could fire from distances of nearly six kilometers. Capt Mulla evaluated the situation within minutes and issued orders for its abandonment.
There were two massive explosions inside the Khukri and the ship went dark. It lost all power and began to tilt steeply to its right (Starboard) as chaos followed the order of ‘abandon ship’. But in all this, Captain Mulla was apparently absolutely cool and calm as he awaited for the worst to follow; helping as many survivors to leave the ship.
He displayed exemplary bravery trying to save as many of his men as he could.
INS Khukri sank within minutes, taking 176 sailors and 18 officers, and the ship’s captain, to their watery graves in the Arabian Sea. But Capt Mulla was such a true leader that he would not abandon his ship and the men who were trapped on it.
During the last minutes of his life, Capt Mulla showed extraordinary courage, helping save as many of his men as he could and not abandoning his vessel. Injured, and with his head bleeding, he went down with his ship.
Capt Mahendra Nath Mulla was given the Indian Navy’s first and nation’s second highest gallantry award, “Maha Vir Chakra” for his outstanding courage, leadership and supreme sacrifice.
INS KHUKRI

In this brave and heroic action, Captain Mulla teaches us not only how to live, but how to die.

A memorial in honour of Capt Mulla was raised featuring a full-scale model of INS Khukri encased in a glass house, placed on a hillock facing the sea.
The Capt. M. N. Mulla Auditorium, at Navy Nagar, Colaba, Mumbai, was named in his honour.
A bust of Capt. Mulla stands in the foyer of the auditorium.