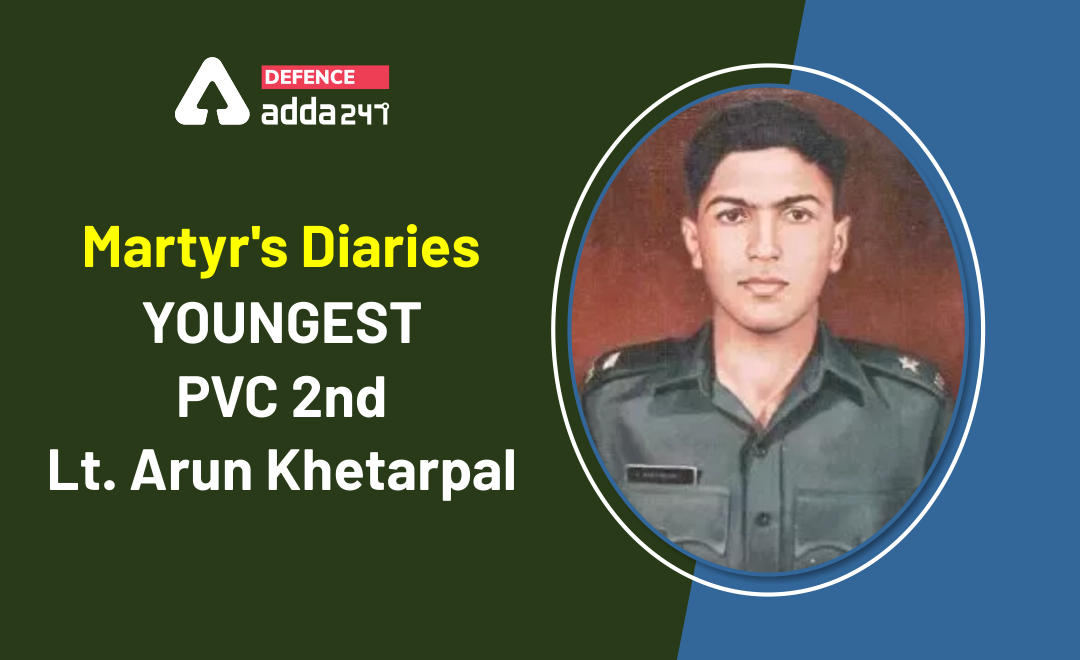 Arun Khetarpal was born in Pune, Maharashtra on 14 October 1950. His father Lt Col (later Brigadier) M. L. Khetarpal was a Corps Of Engineers officer serving in the Indian Army and his family traced a long history of military service. He joined the National Defence Academy in June 1967. He belonged to Foxtrot Squadron and was the Squadron Cadet Captain on the 38th Course. Later on, he went to join the Indian Military Academy and was commissioned into the 17 Poona Horse in June 1971.

During the Indo-Pakistan War of 1971, the 17 Poona Horse was assigned to the command of the 47th Infantry Brigade of the Indian Army. Through the duration of the conflict, the 47th Brigade saw action in the Shakargarh sector in the Battle of Basantar.

On 15th December, the brigade had captured its objective, although, it was filled with extensive mines by the enemy, preventing deployment of tanks of Poona Horse. The engineers unit had cleared the mines halfway when the Indian troops noticed alarming activity of the enemy armour asking for air support. At this critical situation, the 17 Poona Horse decided to push through the minefield.

On 16 December, Pakistani armour launched the first of their counter-attacks under the cover of a smokescreen at Jarpal, targeting the ‘B’ Squadron. 2nd Lt. Arun Khetarpal, who was in ‘A’ squadron and was stationed close by, responded promptly, along with the rest of his regiment after the commander of the squadron urgently called for reinforcements. 2nd Lt. Khetarpal alone in charge attacked the incoming Pakistani troops and tanks taking down an enemy tank in the process. However, Pakistani forces regrouped and counterattacked. In the ensuing tank battle, 2nd Lt. Arun Khetarpal with his 2 remaining tanks fought off and gunned down 10 tanks. His final words over the radio to a superior officer who had ordered him to abandon his burning tank were:

No Sir, I will not abandon my tank. My Main gun is still working and I will get these bastards.

16th December 1971, The fray however took its toll on 2nd Lt Khetarpal as he was hit by enemy fire, but he did not abandon the tank, instead he fought on. Then he set about destroying the remaining enemy tanks. The last enemy tank, which he shot, was barely 100 metres from his position. At this stage, his tank received a second hit and he was seriously injured. This brave officer met a hero’s death, trying to deny the Pakistani Army the intended breakthrough. His heroism gave the Indian Army a stronger position in the Shakargarh bulge. 2nd Lt. Khetarpal’s body and his tank “Famagusta” were captured and returned to the Indian army. On 17th December, 1971, 2nd Lt. Arun Khetarpal was cremated near Samba district and his ashes were sent to his family.

TRIBUTE
2nd Lt. Khetarpal is an iconic figure in the ethos of the Indian Army with prominent constructions being named after him. The parade ground at NDA is named Khetarpal Ground while the auditorium and one of the main gates bear his name at the IMA. 2nd Lt. Arun Khetarpal’s Centurion Famagusta Jx 202 was restored after the war and is presently preserved in the Armoured Corps Centre and School in Ahmednagar. The Housing project of Arun Vihar in Noida was named after Second Lieutenant Arun Khetarapal PVC.