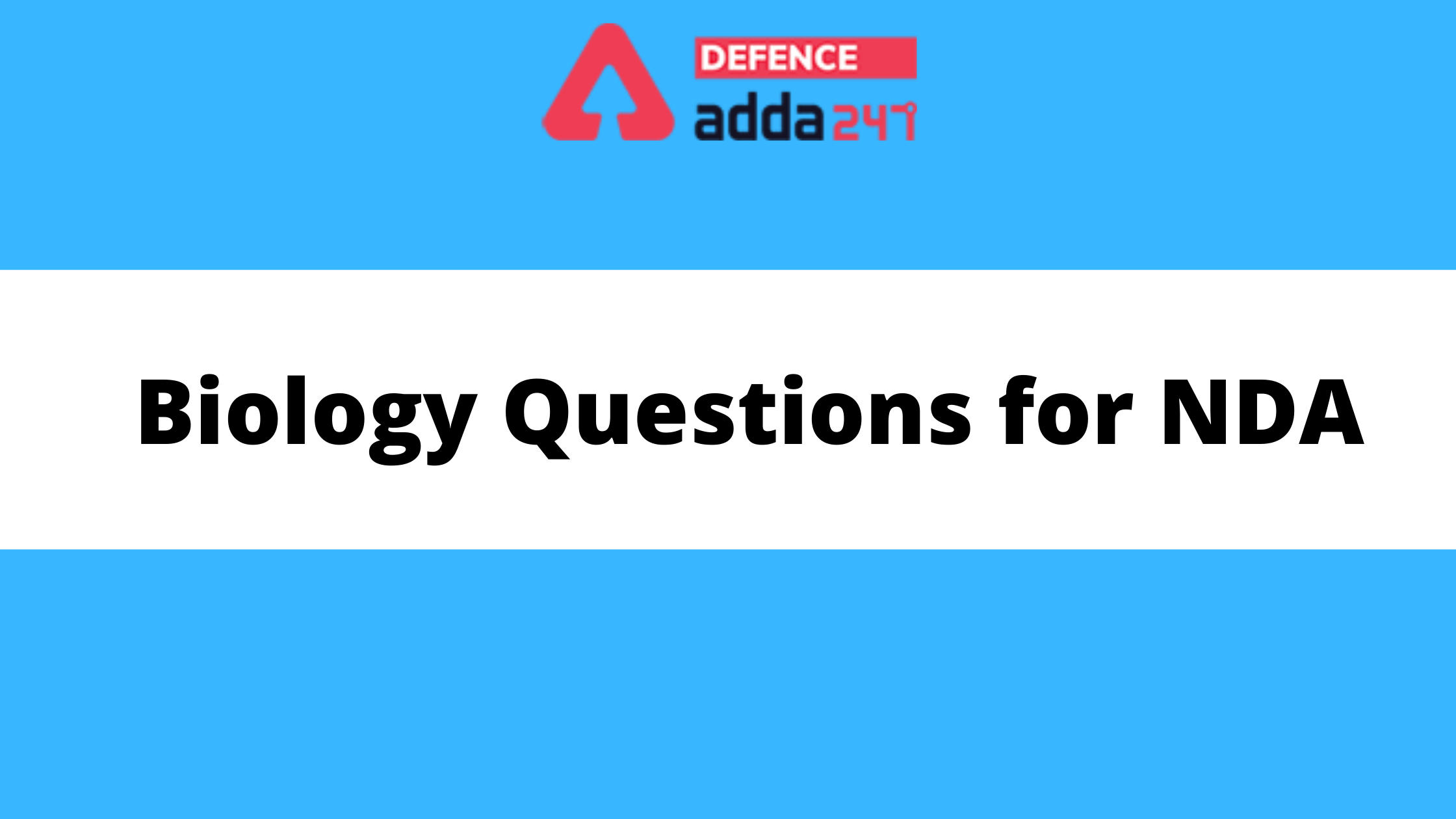 Dear Future Warriors, Biology is an important subject for various exams like NDA, CDS, AFCAT, CAPF Exams. Here at Defence Adda we provide you most important questions asked from Physics based on the syllabus and pattern of these exams. The questions asked are of 10th level and preparing with a wide variety of questions will only help you in these exams.

Q3. Deficiency of which of the following causes Xerophthalmia—
(a) Vitamin B₃
(b) Vitamin B₁₂
(c) Vitamin A
(d) Vitamin

Q4. Which of the following disease is not caused by viruses?
(a) Cholera
(b) Chickenpox
(c) Hepatitis
(d) Measles

Q5. Which of the following is involved in controlling blood sugar level?
(a) Pituitary gland
(b) Islets of Langerhans
(c) Hypothalamus
(d) Spleen

Q8. Blood pressure is controlled by the hormone.
(a) Vasopressin
(b) Oxytocin
(c) Estrogen
(d) Testosterone

Q9. Among following which one is the highest source of ascorbic acid?
(a) Apple
(b) Beans
(c) Carrot
(d) Guava

Q10. Which of the following part of blood carries out the function of body defense?
(a) Red blood cells
(b) White blood cell
(c) Platelets
(d) Hemoglobin’s

Q11. Which one of the following glands in human body enlarged due to goiter?
(a) Adrenal cortex
(b) Adrenal medulla
(c) Pituitary
(d) Thyroid

Q12. Deficiency of which one of the following causes knock-knee, bow legs, and pigeon chest in children?
(a) Vitamin A
(b) Vitamin B2
(c) Vitamin D
(d) Vitamin E

Q13. Which one of the following is responsible for blue baby Syndrome?
(a) Fluoride
(b) Nitrate
(c) Arsenic
(d) Lead

SOLUTIONS
S1. Ans. (b)
S2. Ans. (d)
Sol. Proteins are composed of molecules called amino acids, and each amino acid contains four elements: hydrogen, oxygen, nitrogen, and carbon.
S3. Ans. (c)
Sol. Xerophthalmia caused by a severe vitamin A deficiency is described by pathologic dryness of the conjunctiva and cornea. The conjunctiva becomes dry, thick and wrinkled. If untreated, it can lead to corneal ulceration and ultimately to blindness as a result of corneal damage.
S4. Ans. (a)
Sol.  Cholera is an acute epidemic infectious disease. It is characterized by watery diarrhea, extreme loss of fluid and electrolytes, and severe dehydration. It is caused by the bacterium Vibrio cholera (V. cholera).
S5. Ans. (b)
Sol. The islets of Langerhans are responsible for the endocrine function of the pancreas. The inability of the islet cells to make insulin or the failure to produce amounts sufficient to control blood glucose level is the causes of diabetes mellitus. They are named for the German physician Paul Langerhans, who first described them in 1869. The normal human pancreas contains about 1,000,000 islets.
S6. Ans. (d)
Sol. Waterborne diseases are conditions caused by pathogenic micro-organisms that are transmitted in water. A disease can be spread while bathing, washing or drinking water, or by eating food exposed to infected water.
S7. Ans. (a)
Sol. The vitamin A in carrot comes in the form of beta-carotene, a healthy antioxidant. Eating plenty of carrots every day can improve your vision greatly.
S8. Ans. (a)
Sol. Antidiuretic hormone or vasopressin acts on renal collecting ducts via V2 receptors to increase water permeability which leads to decreased urine formation.T his increases blood volume, cardiac output, and arterial pressure.
S9. Ans. (d)
Sol. Guavas are an excellent source of vitamin C, with one fruit providing 280 percent of the daily value for this nutrient. A guava will also provide you with 15 percent of the daily value for vitamin A and smaller amounts of niacin, vitamin B-6, thiamine, and riboflavin.
S10. Ans. (b)
Sol. The white blood cell, also called leukocyte or white corpuscle, a cellular component of the blood that lacks hemoglobin, has a nucleus, is capable of motility, and defends the body against infection and disease by ingesting foreign materials and cellular debris, by destroying infectious agents and cancer cells, or by producing antibodies.
S11. Ans. (d)
Sol. A goiter or goiter is a swelling in the neck resulting from an enlarged thyroid gland. The disease was later named after Irish doctor Robert James Graves, who described a case of goiter with exophthalmos in 1835
S12. Ans. (c)
Sol. Vitamin D is essential for strong bones because it helps the body use calcium from the diet. Traditionally, vitamin D deficiency has been associated with rickets, a disease in which the bone tissue doesn’t properly mineralize, leading to soft bones and skeletal deformities.
S13. Ans. (b)
Sol. Nitrates in drinking water. A sort of “blue baby syndrome” can also be caused by methemoglobinemia. It is widely believed to be caused by nitrate contamination in groundwater resulting in decreased oxygen carrying capacity of hemoglobin in babies leading to death.
S14. Ans. (b)
Sol. Eight of the water-soluble vitamins are known as the vitamin B-complex group: thiamin (vitamin B1), riboflavin (vitamin B2), niacin (vitamin B3), vitamin B6 (pyridoxine), folate (folic acid), vitamin B12, biotin and pantothenic acid. The B vitamins are widely distributed in foods, and their influence is felt in many parts of the body.
S15. Ans. (d)
Sol. The major components of honey are Fructose: 38.2% Glucose: 31.3% Maltose: 7.1% Sucrose: 1.3% Water: 17.2% Higher sugars: 1.5% Ash: 0.2% Other/undetermined: 3.2%