Skip to content
Home   »   What’s The Difference Between Joining The... 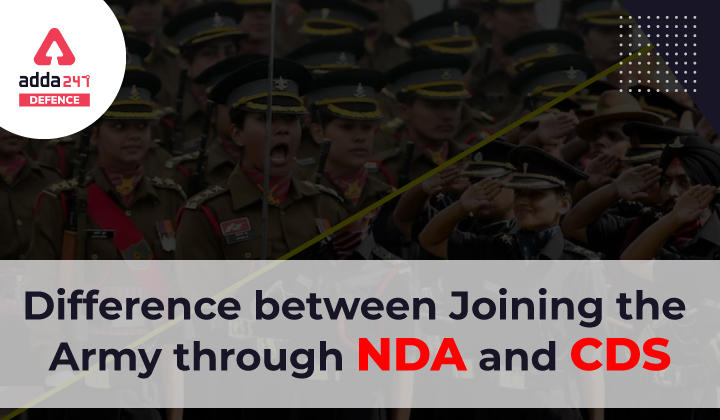 Difference Between Joining The Army Through NDA and Joining Through CDS

If you also dream to live a life less ordinary then you  should be definitely  aware of the two most coveted exams ,conducted by the UPSC. Yes, here we are talking about NDA and CDS , these two entrance exams serve as gateways to get inducted into defence sector as officers but here we will try to explain you the difference between these two, let’s have a detailed discussion about them.

NDA is a higher secondary level examination whereas CDS is a graduate level exam ,so for writing NDA you can appear after 10th but for writing CDS exam you must be a graduate or appearing in the final year of graduation.

The NDA exam requires candidate’s age between 16 to 19 year whereas in CDS age limit is from 19 to 25 years.

NDA exam is designed according to higher secondary level, there are two papers GAT(general ability test) and mathematics, two and a half hour’s time is allotted for both the exams and the written test is of 900 marks followed by SSB interview which is of 900 marks.

CDS is a graduate level exam, here you need to give three papers if you wish to get into IMA,IAF and INA ,the three papers are math English and general knowledge ,if you are aspiring for OTA then the math paper is excluded.

You are given 2 hours for each examination, which have a composite score of 300 (200 for OTA), the SSB interview has the same weight-age as of the written examination.

Once you get recommended by the SSB interview panel and made it to the final merit list ,you undergo a rigorous training program.

The NDA cadets are provided the following degrees.

Though both the services induct you as an officer but there are slight differences in the salaries,the chart given below will help you in understanding better.  Apart from that there are several other allowances officers are eligible for, the government takes well care of the Military Officers so there is no dearth of financial aids.