SSC CHSL Cut Off 2020: Cut Off is the minimum qualifying marks that candidates need to score to appear for the next round of the exam so that he gets a chance to complete the exam process. The category wise cut off is released along with the result of the exam. Candidates can check the cut-off below. There is no sectional cut off in SSC exams. Here, we have discussed the cut-off. 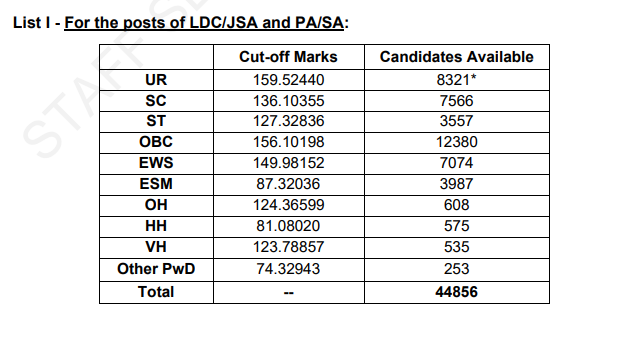 SSC CHSL cut off is calculated considering the following factors:

Use of SSC CHSL Previous Year Cut Off:

SSC CHSL Cut-off for 2018 has been released by SSC. The Cut-Off table for SSC CHSL 2018 Tier 2 exam is mentioned below.

Category wise Cut-Off marks distribution for candidates are given below:

The different posts of SSC CHSL 2016 were filled by various category candidates. This is depicted in the following table:

Candidates must check the SSC CHSL Cut-off for their respective category to confirm their qualification for the Tier-2 Examination.  SSC CHSL Tier-2 Exam is of qualifying nature and is intended to test elementary language skills to re-categorize the post as Group-C and given job requirements.
A well-prepared exam comprises thorough knowledge of the syllabus, previous year papers, and/ or mock papers.
All the best!