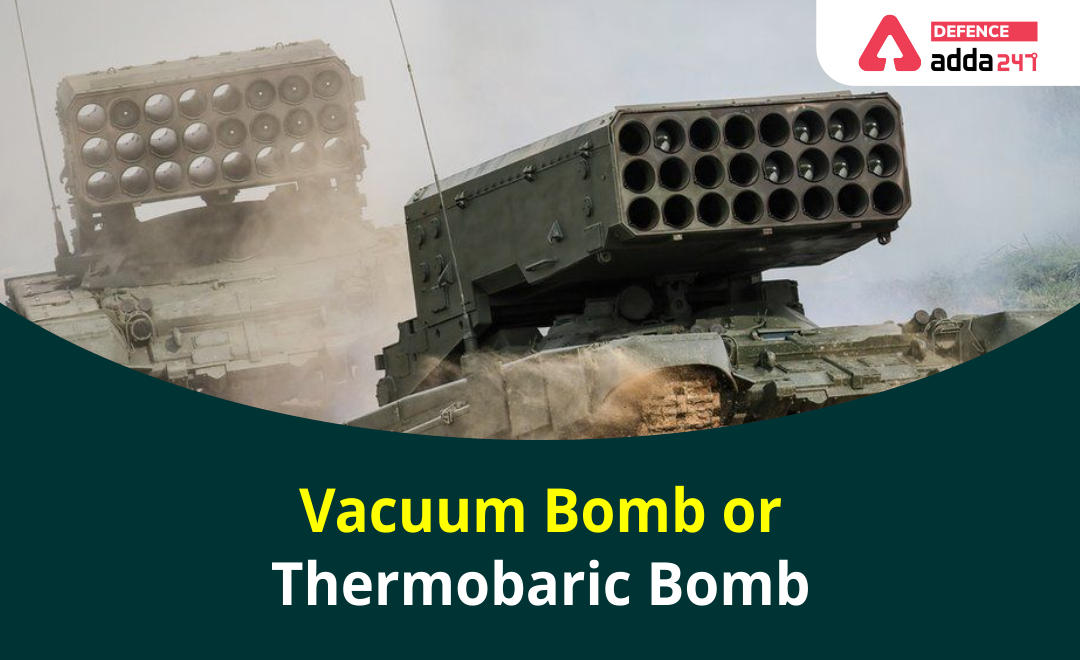 Vacuum Bomb or Thermobaric Bombs suck in oxygen when they explode. They use the air to create the long lasting and high temperature explosions. They can vaporise human bodies, crush internal organs and reduce cities to ruble. That’s how powerful vacuum bombs are.

In the present context, Ukraine claims that Russia is using Thermobaric weapons in the ongoing conflict in the neighboring countries. Moscow has also been accused of deploying cluster bombs too. Cluster bombs have been banned by more than 100 countries. A cluster bomb contains a number of submunitions or smaller bombs. It attacks by spraying these bombs all over the large area.

Tensions are soaring across the Globe as Ukraine claims that Russia is using Thermobaric Weapons in war against its country. The accusation has been made by Oksana Markarova, The Ukraine’s Ambassador to the United States. Amnesty International and Human Rights Watch in their reports have also accused Russia of using Thermobaric bombs also known as Vacuum Bombs. Many Western Reports have claimed to have spotted Russia’s TOS-1A Multiple Launch Rocket System based on a T-72 Tank Chassis that shoots Thermobaric Weapons in Ukraine. So far, the claims have not been verified by International Watchdogs, United States also did not confirm the use of such weapons in war against Ukraine.

What is Thermobaric Bombs?

A Thermobaric Bomb or Vacuum Bomb is an aerosol bomb that works on a two-stage munition. It is capable of sucking all oxygen from its blast radius. It creates huge fireball and vacuum that sucks oxygen from surrounding. Blasts have bigger than conventional explosives. It is capable of vaporising human bodies. Thermobaric weapons are banned from use as per Geneva Convention. These bombs have the ability to vaporise anything in their blast radius. T

This isn’t the first time Thermobaric weapons have been used in conflict situations. Such Bombs have been used by Russian and Western Forces since the 1960s. As per Reports, US used such bombs to eliminate Al-Qaeda in the Mountains in Afghanistan. Russia accused of  using Thermobaric Bombs in Chechnya in 2000. Unconfirmed reports suggest that Russian military forces used ground-delivered thermobaric weapons in the storming of the Russian parliament during the 1993 Russian constitutional crisis.

International law does not specifically prohibit the use of thermobaric munitions, fuel-air explosive devices, or vacuum bombs against military targets. Their use against civilian populations maybe banned by the United Nations (UN) Convention on Certain Conventional Weapons (CCW), however they are not explicitly listed. In addition, as the United States has thermobaric weapons in its military inventory, it is unlikely that they will be explicitly listed, or that there will be a treaty banning their use.