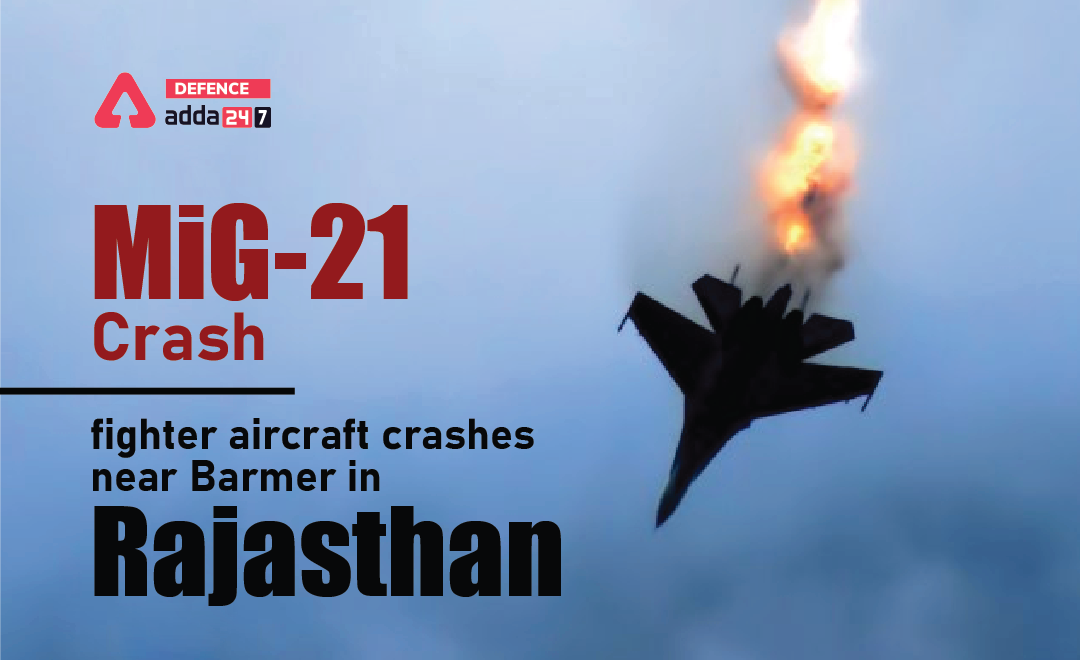 A MiG-21 fighter aircraft of the Indian Air Force (IAF) crashed in Barmer district of Rajasthan on 28th of July which led to the demise of both the young fighter pilots. Barmer District Collector Lok Bandu told PTI that the IAF plane crashed near Bhimda village in Isramon ka Tala village under Baytu police station limits. A twin-seater MiG-21 trainer aircraft of the IAF was airborne for a training sortie from Utarlai air base in Rajasthan on the same evening.

Locals informed the police about the crash around 9 pm. Barmer Deputy SP Jaggu Ram, who had reached the spot, stated “Locals reported a fireball crashing into the ground, killing the pilots. The impact was such that from the remains, we can’t tell whether there were two pilots or one. The debris is spread over a kilometer,”.

Earlier the official twitter handle of the Indian Air Force posted, “At 9:10 pm this evening, an IAF MiG 21 trainer aircraft met with an accident in the western sector during a training sortie. Both pilots sustained fatal injuries.” Later on, After confirming the death of both the pilots they tweeted, “IAF deeply regrets the loss of lives and stands firmly with the bereaved families. A court of inquiry has been ordered to ascertain the cause of the accident,”.

Defense minister Rajnath Singh also took to Twitter to express condolences. He tweeted, “Deeply anguished by the loss of two Air Warriors due to an accident of IAF’s Mig-21 trainer aircraft near Barmer in Rajasthan. Their service to the nation will never be forgotten. My thoughts are with the bereaved families in this hour of sadness,”.

First single-engine Russian MiG-21 was received by Indian Airforce in 1963, and it gradually inducted another 874 variants of the Soviet-origin supersonic fighters in order to strengthen its combat potential. But due to the its involvement in large number of accidents, so many times that it was even given a name, “Flying Coffin”. More than 400 MiG-21s have been involved in accidents that have claimed the lives of around 200 pilots in the time period of last 60 years.

As per the Experts, MiG-21s is that aircraft which has crashed more than any other fighter as they formed the bulk of the fighter aircraft in the IAF’s inventory for a long time. IAF has kept its MiG-21 fleet flying longer than it should have kept because of lack of funds which is causing delay in the induction of new fighters.