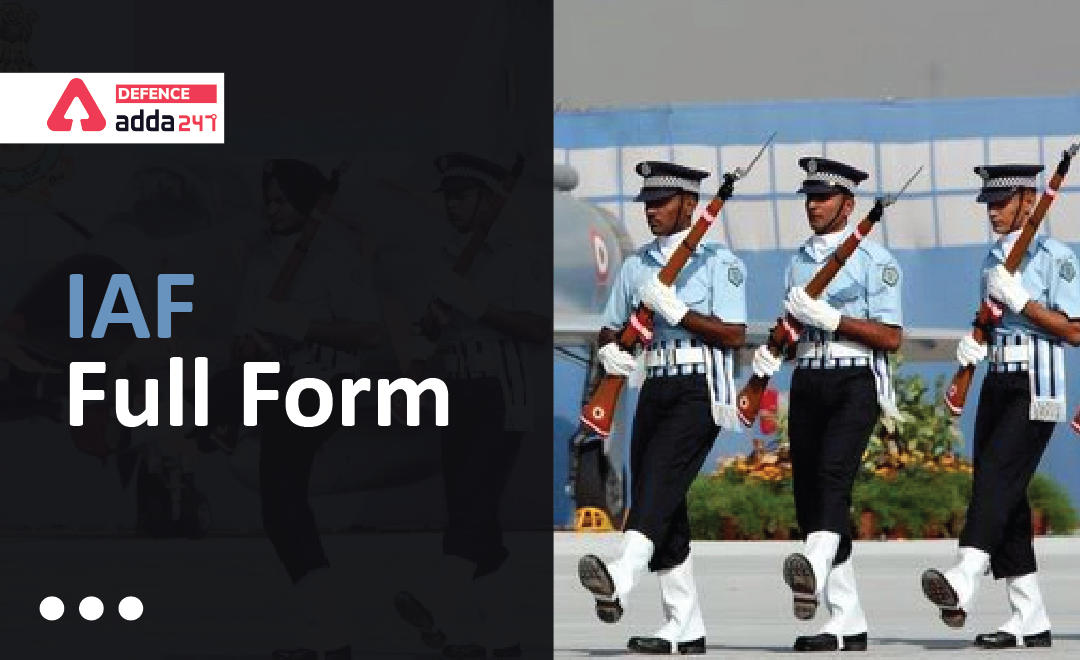 IAF stands for Indian Air Force ,IAF is the air arm of Indian Defense, Owing to the number of Personnel and Aircraft assets it ranks fourth among the Air Forces of the World.The President of India holds the rank of Supreme Commander of the IAF.  The Chief of the Air Staff, an air chief marshal, is a four-star officer and is responsible for the bulk of operational command of the Air Force.The Headquarter of Air Force is Integrated Defense Headquarter in New Delhi.he Indian Air Force has over 1,500 aircraft and over 1,80,000 soldiers.

Indian Air Force was established in 8 October  1932, as an auxiliary body to Royal Airforce of Britain , On 1 April 1933, the IAF commissioned its first squadron, No.1 Squadron, with four Westland Wapiti biplanes and five Indian pilots.

It was during world war 2, Indian Air Force played a very crucial Role it halted the advance of the Japanese army in Burma, and hence it became the first strike by IAF and its first mission was Japanese military base in Arakan, in 1945 in recognition of the valiant services Indian Air Force was conferred the Title of Royal Indian Air Force by King George VI which was kept until 1950 after which it became Indian Air Force

The Motto of Indian Air Force has been taken from eleventh chapter of the Gita, the Discourse given by Lord Krishna to Arjuna on the battlefield of Kurukshetra during the Great War of Mahabharata.This is symbolic of Divine form of Lord Krishna,reaching up to sky  and instilling the sense of bravery and courage in Arjuna. Air force has taken this divine lesson and etched it in Heart making true every word of it by challenging the adversaries  with its Power and Glory.

The IAF Logo showcase The national emblem of India The Ashoka Capital with Satyamev jayate written on it which mean Truth always wins , below it is a Himalayan Eagle with its wings spread which signify the fighting qualities of the Indian Air force, the circle surrounding it has Bhartiya Vayu Sena written on it in Devnagri Sript. The Scroll placed below shows the Motto of Indian Air force  which says Touch The Sky With Glory.

Indian Air Force since its inception has always brought glory and pride to the nation, not only in warfare but in peacekeeping and rescue operations it always performed exceptionally.

IAF  was engaged in 4 wars with Pakistan and one war with China , The major operations undertook by IAF are Operation Vijay, Operation Meghdoot, Operation Cactus and Operation Poomalai.

Operation Vijay was carried out from 17 to 19 December 1961 for liberation of Goa which was ruled by Portugese then this was India’s first Tri-Service ‘Integrated’ operation that resulted in liberation of Goa, Daman, Diu, Dadra and Nagar Haveli .

Operation Meghdoot was the codename for the Indian Armed Forces’ operation to seize control of the Siachen Glacier in Kashmir, it was carried out in 13 April 1984. Meghdoot was the first military offensive of its kind.

Operation cactus was India’s military prowess exhibition to the world which aimed at helping Maldives to suppress   a coup launched by mercenaries. it resulted in close nit bound of India and Maldives.

It is  also known as Eagle Mission 4, Poomalai was a mission undertaken by the Indian Air Force for airdropping supplies over the besieged town of Jaffna in Sri Lanka on 4 June 1987 to support the Tamil Tigers during the Sri Lankan Civil War, it again strengthened India’s International relations.

According to Air Force act of 1950, the Mission of Air force is” Defence of India and every part there of including preparation for defence and all such acts as may be conducive in times of war to its prosecution and after its termination to effective demobilisation “

Along with safeguarding Indian territory and national interests from all threats, It also provides support during natural calamities. The IAF provides air support to the Indian Army on the battlefield as well as strategic and tactical airlift capabilities.
The IAF’s roles can be described as Deterrence, Punishment, Protection, Projection and Peace-time roles.

Who was first Indian  Chief of Air Force?

Air Marshal Subroto Mukherjee, one of the founding members of the Air Force took over as the first Indian Chief of Air Staff.

when was IAF founded?

Who is the current Chief Of Air Staff?