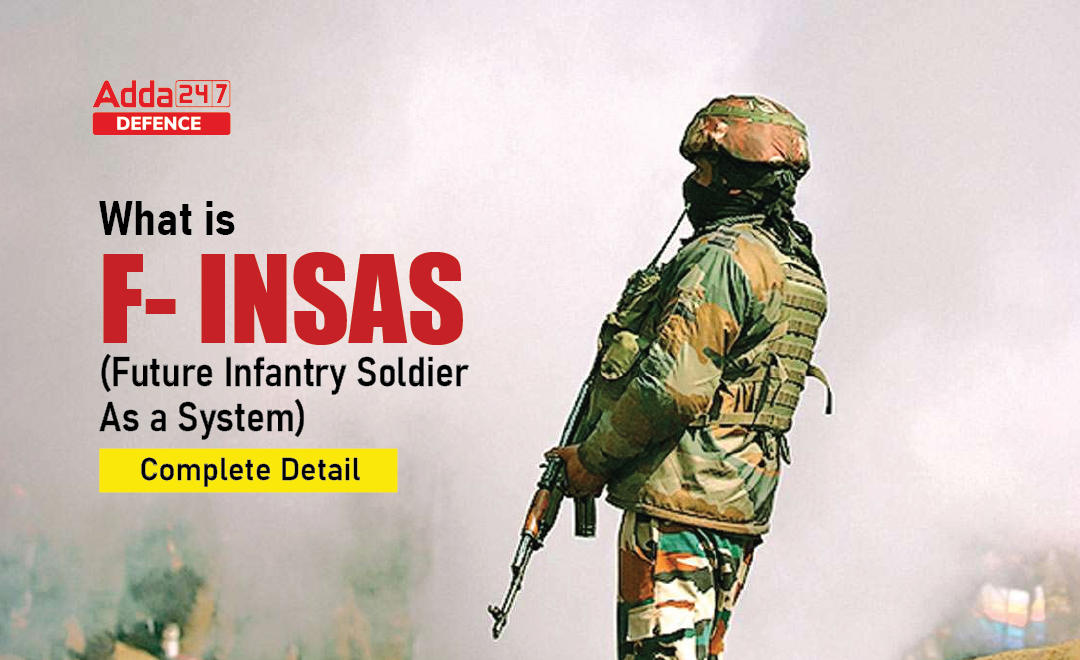 Future Infantry Soldier As a System

Project F- INSAS was started with the aim of modernizing arsenal facilities for infantry soldiers of the Indian Army by increasing the operational capability of the soldier. F-INSAS stands for – Future Infantry Soldier As A System. Under this project, infantry soldiers are being equipped with modern system which is lightweight, comfortable with all-weather-all-terrain, cost-effective and low maintenance. Not just this, this system also includes an AK-203 assault rifle, and a multi-mode hand grenade, which can be used for both defensive and offensive modes. The weapon kit also includes a multi-purpose knife for close-quarters combat. This system also provides soldiers with ballistic helmets and goggles to protect against small projectiles and fragments. The bullet-proof vest is also included in the system. To provide the facility of real-time exchange of information F-INSAS is also equipped with hands-free, secured advanced communications to provide enhanced situational awareness.

Infantry Soldier has always been one of the most prominent part of the Indian Army on the battlefield. With the evolving times, types of warfare has changed a lot but the demand for soldiers on foot has remained constant rather it increased day by day. Modern-day infantry soldiers still play an indispensable role in Indian Army as they prove to be effective in every type of terrain and other varying geographical conditions. So it’s the demand of time to increase the operational capabilities of infantry soldiers & associated modernization programmes for to enhance their operability.

Inspired by the Future Warrior System of America, India started Project F-INSAS in 2005. It started with the aim of modernizing all the Indian Infantry Units by 2020 but after a while, In 2015 this project was divided into two phases by the Indian Army with the purpose of having convenience in budget.

The Objective of the Project:

It was started with the sole purpose of enhancing the operational capabilities of infantry soldiers. Enhanced capabilities in terms of lethality, situational awareness, mobility, survivability and improved communication technologies.

Initially, Multi-Caliber Individual Weapon System (5.56/ 7.62/ 6.8) was included in the program which was supposed to be replaced with the currently used INSAS rifle. But later in 2017, Army set aside these rifles and In 2019 procured SIG716 Rifles from the US. Along with that Army is going to have AK 203 rifles also.

3. Visor: it can provide

Nowadays Indian army has been considering the changes required in combat uniforms along the line of project F-INSAS.

6. Other Accessories like IRNSS Device, Mine Detection Device, various other radar devices, jammers, sensors, thermal imagers, etc. are included in the project.

Finally, this ambitious project has turned into reality. Defence Minister Rajnath Singh handed over to the Indian Army Future Infantry Soldier as a System (F-INSAS) in an unveiling ceremony of various defence and strategic systems held in Delhi on the 16th of august 2022.

The full gear of the F-INSAS includes an AK-203 assault rifle, which is manufactured by a Russian-Indian venture with a range of 300 metres,

For the better operability of the infantry soldier, a ballistic helmet, ballistic goggles, bulletproof vest, elbow pads and knee pads have also been provided in the system. The helmet and vest provide protection from 9 mm ammunition and AK-47 assault rifles. Other than this it also includes a state-of-the-art target acquisition and advanced communication system.