As you all know that UPSC CAPF ACs 2022 exam notification was released on 20th April and now Candidates can fill the Application form. But before that, you should check whether you are eligible to appear in this Exam or not.

So, in this article, we will discuss the eligibility criteria for the CAPF Exam as described by the UPSC. The eligibility conditions are explained below.

UPSC has announced the CAPF ACs Recruitment for a total of 253 vacancies. Interested students can check the detailed Eligibility Criteria before applying for the same.

The lower age limit for the CAPF exam is 20 years and the upper age limit is less than 25 years. The age is calculated from August 1 of the exam year. For appearing in the UPSC CAPF exam 2022, the candidates must have been born not earlier than August 2, 1997, and not later than August 1, 2002.

The upper age limit prescribed above will be relaxable for certain categories. 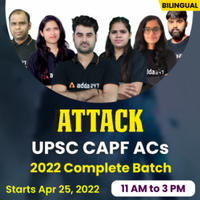 According to the official CAPF Notification, “the candidate must have a Bachelor’s degree from any recognized university”. Also, the candidates who are appearing in their final year of the degree course can apply for this exam. But they should produce the final year mark-sheet with the Detailed Application Form(DAF).

Possession of NCC ‘B’ or ‘C’ Certificates

The candidates having the NCC ‘B’ or ‘C’ Certificate will be a desirable qualification These qualifications will be given consideration at the time of the Interview/Personality Test only.

There are certain physical and medical standards prescribed by the UPSC CAPF. The minimum standards that a candidate has to fulfill are given below.

Colour Perception-III (CP-III) by ISIHARA plates.
These were the eligibility criteria for appearing in UPSC CAPF ACs Exam 2022.

Q. What are the total number of Vacancies announced for CAPF ACs 2022?

Ans. UPSC has released the CAPF ACs 2022 Notification for a total of 253 posts.