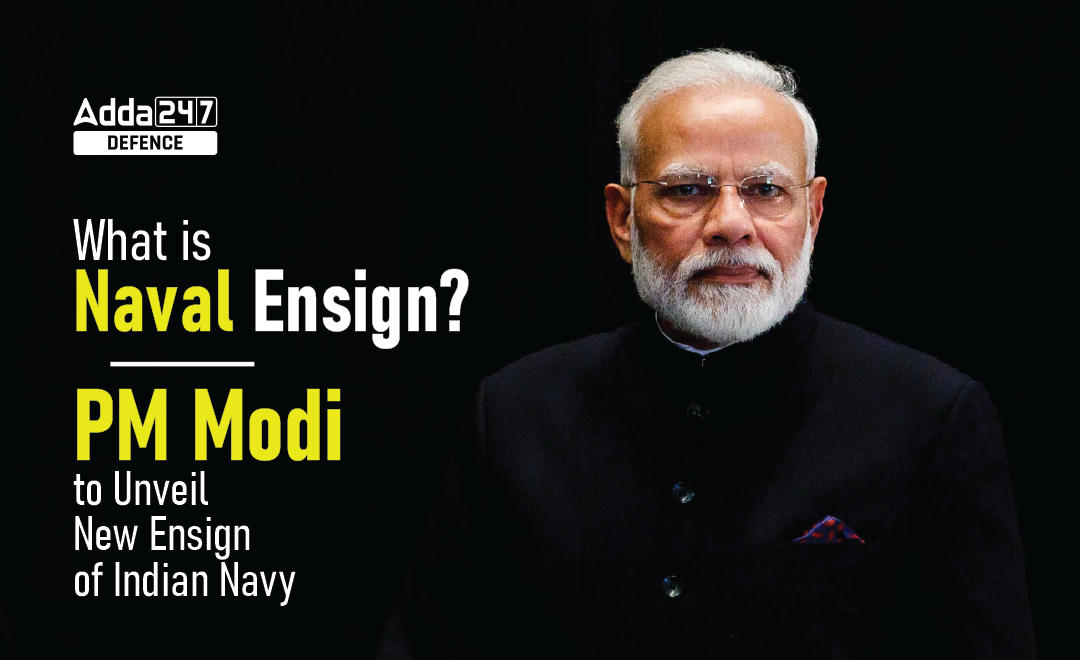 What is Naval Ensign? PM Modi to Unveil New Ensign of Indian Navy

Indian Navy will be getting its new ensign very soon. During the commissioning of the country’s first indigenously built aircraft carrier, INS Vikrant, the new ensign of the Indian Navy will be unveiled by Prime Minister Narendra Modi. The ceremony will be held at Cochin Shipyard Limited in Kochi on September 2. Changes will include the removal of the St George’s Cross. It was placed by the Britishers during British rule in India. The design of the new ensign has not yet been released publicly.

Ensign is also known as “Nishaan”. As per the report of news agency ANI, the final ensign will be chosen by the government from around 10 different designs prepared by the naval headquarters. There are various suggestions including a depiction of 11 waves on the flag representing 11 different coastal states, including a sign of the ancient navies of India, etc. First, the design will be approved by the Prime Minister of India and then it will become the final ensign after getting the final assent of President Draupadi Murmu as she also holds the position of the Supreme Commander of the armed forces.

The main motive behind unveiling the new naval ensign is to do away “with the colonial past,” and will be “befitting the rich Indian maritime heritage,” as per the official statement from the PMO.

What is Saint George Cross?

Saint George Cross are the horizontal and vertical red stripes which symbolise the Cross of Saint George in the Indian Navy ensign. It is named after a Christian Warrior Saint who is considered to have been a crusader during the third crusade.  Since this symbol reminds of the British rule in India, So, there is a probability of dropping it in the new design incorporated for the ensign. 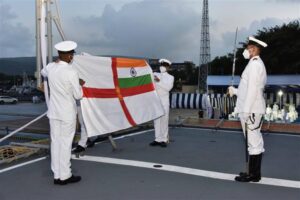 The Indian Naval flag was adopted during the colonial period. The naval service became Royal Indian Navy (RIN) in 1934 and as India became a Republic on January 26, 1950, the prefix ‘Royal’ was dropped and it was rechristened as the ‘Indian Navy’.
As the Indian defence forces still had UK’s colonial flags and badges after Independence, So, After January 26, 1950, Indian patterns were also included in the flags. Earlier there was a sign of Union Jack in the flag of the Indian Navy which was removed, and in that place, the tricolour was placed in the canton (top left corner), but the St George’s Cross remained as it is.
It was continued till 2001 but later replaced with the naval crest in the middle of the white flag while the Tricolour retained its place on the top left corner and again, In 2004, the St George’s Cross was placed back with an addition of the Ashoka emblem at the intersection of the cross. The Naval crest which was earlier added in 2001, was then removed.
In 2014, with one more modification, the national motto ‘Satyameva Jayate’ was added under the Ashok Emblem, written in the Devanagri script. Since then, it has been continued to the Indian Navy’s ensign.
Now the current ensign is a white flag with horizontal and vertical stripes with the words written over it, ‘Satyameva Jayate’ in Devanagri script, under the Ashoka emblem at the centre and the tricolour is placed at the top right corner of the St George’s Cross.