Skip to content
Home   »   All Wars Fought by India After... 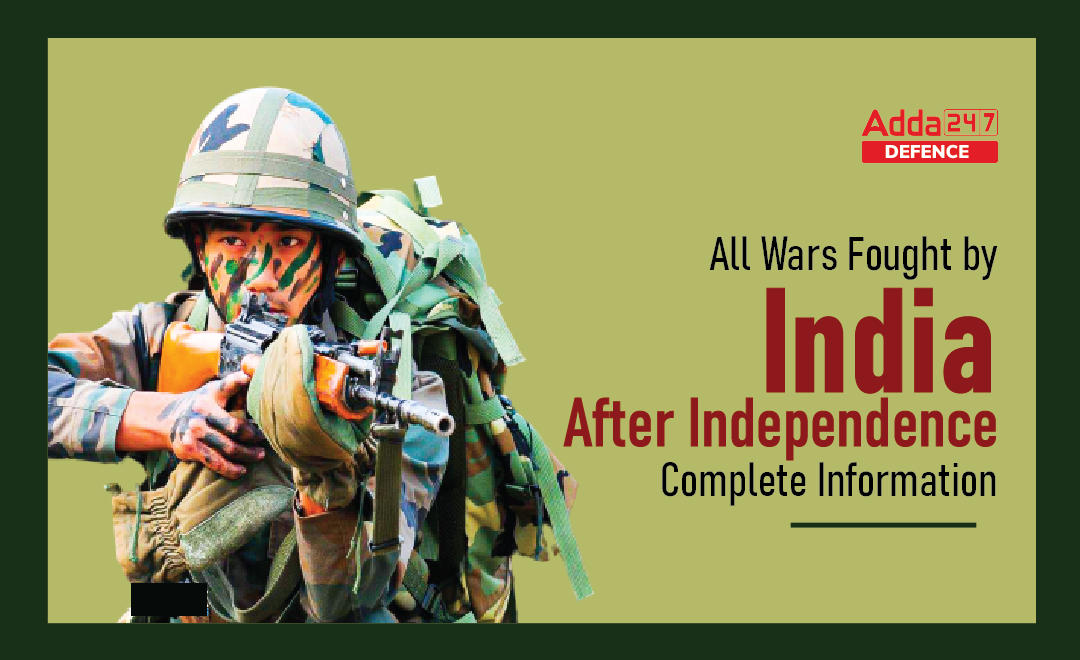 All Wars Fought by India After Independence, Complete Information

Since its Independence, India has been trying hard to protect the sovereignty of the nation due to constant fear to its territory from its hostile neighbour countries, China and Pakistan. That’s why Indian soldiers are doing their best to protect the nation from any external as well as internal enemy, which is why they are counted as one of the best armies across the world. The testament of the courage and valour of Indian Armed forces is proved by the fact that India won in every conflict it faced after independence except the 1962 Indo-Sino war. In this article, we will go through all the wars India fought after independence in detail.

Just after getting independence, Pakistan tried infiltrating Jammu and Kashmir as they wanted to make Kashmir, an integral part of their Pakistan and it became the reason for the first four Indo-Pakistan wars. The war started on 22 October 1947 and it lasted till  5 January 1949.

It was the tribal militias of Pakistan who crossed the Indian border and reached Baramulla, in an attempt to capture Srinagar and then the Maharaja of Jammu and Kashmir, Hari Singh of the Dogra Dynasty, asked for the support of the army from the Indian Government. And then the full-fledged war was fought, after which, a ceasefire was declared on 1 January 1949. UN also intervened at the request of Jawaharlal Nehru, who was then prime minister. The terms of the cease-fire, laid out in a UN Commission resolution on 13 August 1948, were adopted by the Commission on 5 January 1949.

Initially, Pakistan did not want to adopt the resolution but as they were losing in the war, they had to accept it in November and a ceasefire line was drawn by the UN between both countries. Around 2000 jawans laid their lives in the war. As per the condition of the ceasefire, Pakistan withdrew its forces (regular and irregular) while India maintained minimal forces in the state to secure law and order.

As China is known for its nature of not adhering to terms and conditions, and this is what became the reason for the Sino-India war of 1962. China refused to accept the MacMohan Line and Chinese troops captured Tibet abruptly and the Indian Army wasn’t even prepared to be attacked by the neighbour country. The courageous 20,000 army soldiers of India were tackling 80,000 army soldiers of China and they were able to fight for a month. Finally, it ended in the month of November 1962 after China declared a ceasefire. More than 6000 soldiers were killed in this war from both sides and China turned out to be victorious.

Just after three years of fighting with china, India was facing another enemy country from different borders. The Pakistani Army launched a covert operation across the ceasefire line in Kashmir in 1965. It is considered to be one of the most prominent wars fought by India. Pakistan could not digest the fact that Kashmir was in the hands of India and since the adoption of the UN resolution, there were constant tensions between both countries. Pakistani soldiers attacked first as they were imposing as Kashmiris and they occupied the Kanjarkot area in Kutch. It subsequently led to a full-fledged war in Jammu and Kashmir.

Again, the UN intervened and Tashkent Declaration, a peace agreement was signed by both countries on 10 January 1966. At last, The war ended and both sides took their pre-war positions.  This time, Indian forces were able to subdue the Pakistani tanks and overpowered Pakistani Soldiers but both countries declare themselves winners of the war and the war ended with a Stalemate. By Sept 22 both sides had agreed to an UN-mandated cease-fire ending the war that had by that point reached a stalemate. More than 12000 soldiers laid their lives in the war from both sides.

In 1971, India extended it help to Bangladesh which was then East Pakistan to help it in getting free. The war began with Operation Chengiz Khan’s aerial strikes on 11 Indian air stations, which led to the commencement of hostilities with Pakistan and Indian entry into the war for independence in East Pakistan on the side of Bengali nationalist forces, expanding the existing conflict with Indian and Pakistani forces engaging on both eastern and western fronts. India stood victorious after 13 days and the Eastern Command of the Pakistan military signed the instrument of surrender.

More than 90 thousand Pakistani soldiers were incarcerated by the Indian Army. India’s Field Marshal Sam Manekshaw on 13th December said these unforgettable words, “You surrender or We wipe you out,” soon after which India won the war over Pak armed forces. Victory day of India has been celebrated as Vijay Diwas on 16 December every year, in India and Bangladesh. This day also marked the formation of the new nation of Bangladesh. More than 3 lakhs soldiers were killed in the war.

The forward post was captured by the Pakistani troops and terrorists and it became the reason for this war. The war took place between May and July of 1999 in Jammu and Kashmir’s Kargil district. On July 26, 1999, India successfully took command of the high outposts. The Kargil war lasted for 60 days. The infiltrators positioned themselves in key locations that gave them a strategic advantage during the start of the conflict, After which the Indian Army launched “Operation Vijay” in which 200,000 Indian troops were mobilized to tackle the Pakistani Army and infiltrators. The war came to an official end on July 26, 1999, thus marking it as Kargil Vijay Diwas. The official number of soldiers killed of the Indian army was 527, while that of the Pakistani soldiers was between 357 and 453.