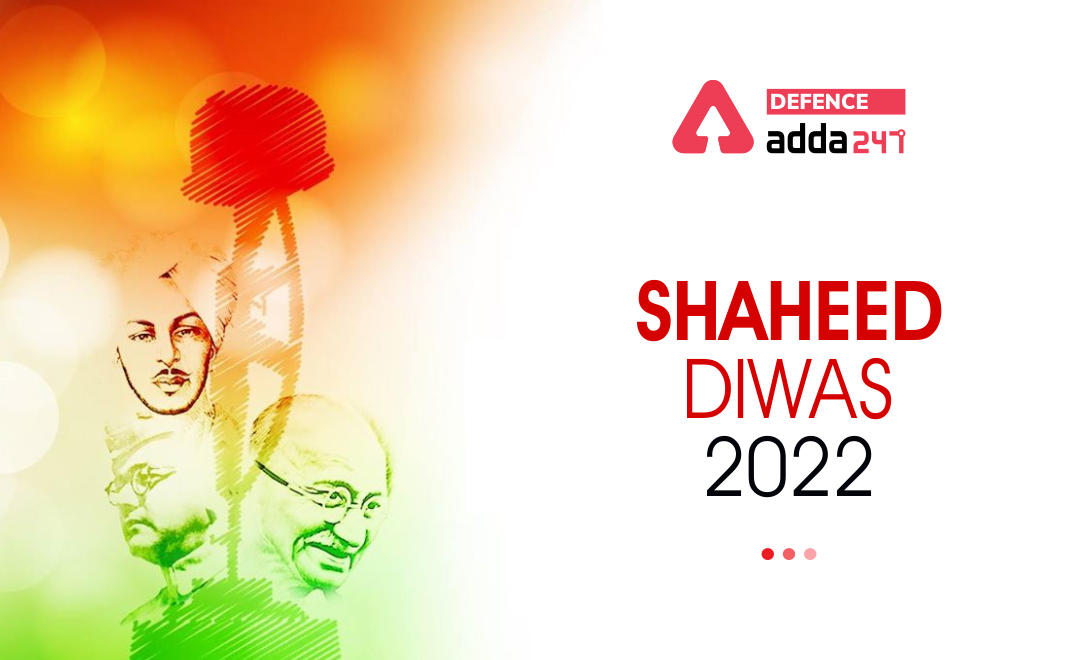 Our country India celebrates Shaheed Diwas or Martyrs’ Day every year on March 23 to remember the bravest of brave, Shaheed Bhagat Singh, Shivaram Rajguru and Sukhdev Thapar, who sacrificed their lives for the freedom of the nation. Shaheed Diwas is also celebrated on 30th January in remembrance of Mahatma Gandhi. Brave hearts are paid tribute on these days.

It is the cause, not the death, that makes the martyr.

Defenceadda remembers and salutes the brave hearts Shaheed Bhagat Singh, Shivaram Rajguru and Sukhdev Thapar for their courage, valour and greatness in providing the freedom for our country. Apart from India, Shaheed Diwas is also observed by 14 other nations to pay homage to their freedom fighters.

If we look back in the history on this date in 1931, three young revolutionaries Bhagat Singh, Shivaram Rajguru and Sukhdev Thapar were hanged to death by the British rulers in Lahore jail. The arrest of the three freedome fighters in the Lahore conspiracy case, subsequent hanging and cremation in Sutlej River provided ammunition to the burning pyre of revolution.

What is the Significance of Shaheed Diwas 2022?

On this day, people across the India remember the selfless sacrifice made young inspirational souls Shaheed Bhagat Singh, Shivaram Rajguru and Sukhdev Thapar. Schools and colleges hold events on poetry, speech or drama to pay tribute to the revolutionaries.

March 23 marks 91st martyrdom of Bhagat Singh, Sukhdev Thapar and Shivaram Rajguru, the three revolutionary heroes in India’s freedom struggle who were hanged by the British Raj for their alleged involvement in the killing of John Saunders. The trio confused Saunders with JA Scott, a police officer who was believed to have thrashed Lala Lajpat Rai during a lathi charge in October 1928. Considered as one of India’s most influential revolutionaries, he is often referred to as Shaheed Bhagat Singh, the word “Shaheed” meaning “martyr” in a number of Indian languages. India observes Shaheed Diwas on the day of their execution as a show of respect of its hero.

Born on September 28, 1907, in Punjab in British India, Bhagat Singh is a well-known freedom fighter who was a revolutionary socialist and played a crucial role during the Indian freedom struggle. Sukhdev was  Born on May 15, 1907, in Ludhiana’s Naughara Mohalla to Ramlal Thapar and Ralli Devi and Rajguru was born on August 24, 1908, into the middle-class family at Khed in Pune district of Maharashtra. All of them grew up witnessing the injustice and exploitation the British Raj continually wrought upon India. These three are best remembered for there involvement in the Lahore Conspiracy Case of 18 December 1928. They were hanged till death on March 23, 1931, in Lahore jail (Now in Pakistan) by the colonial British. We remember the beautiful lines by Ram Prasad Bismil that thrusts immense patriotism in our blood.

They were the great freedom fighters of our nation and their sacrifices led to the freedom of our nation. Its because of them that we are able to survive in free India. No Indian can ever forget there sacrifice and they will always be the heroes of our country.
May Your Soul Rest in Power