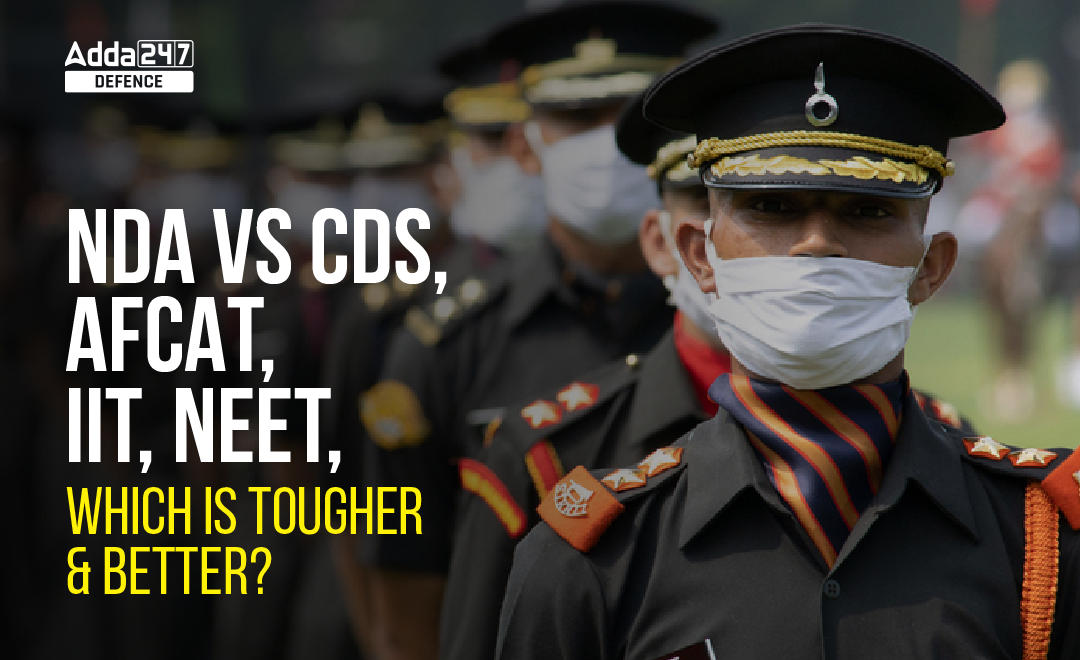 NDA vs CDS, AFCAT, IIT, NEET, Which is Tougher and Better

Among all the exams, NDA, CDS and AFCAT are the tests conducted to induct candidates into Indian Armed Forces.
Through IIT and NEET, candidates become engineers and doctors as they get seats in the best government institutes in India. Since the pattern of exams is different along with their nature so, comparison depends upon various factors like the syllabus, difficulty and the pattern. Below, we will tell you all the important details pertaining to the exam. In the end, you will be able to decide the best or the easiest for you as per your own understanding.

NDA vs CDS Which is Tougher

Check all the important details related to NDA 2023

NDA vs AFCAT, Which is Tougher and Better

AFCAT means Air Force Common Admission Test through this exam an aspirant can join Air Force’s flying branch, as a techie or in the ground duty branch as an officer. Here both male and female candidates can apply. The examination is conducted twice a year. Candidates are selected based on their performance in the online exam and Air Force Selection Board (AFSB) interview. Candidates opting for Ground Duty (Technical) branches are required to appear in both AFCAT and Engineering Knowledge Test (EKT).

NDA (National Defence Academy) In  this exam only male candidates can apply. An aspirant can join any of the wing (Air Force, Army, Navy) as per choice, merit and vacancy. Here the candidate will get bachelor degree in arts, science (maths, chemistry, physics and computer science) and humanities arts.

If we consider the difficulty level, AFCAT is considered to be easier than NDA after taking all the parameters into account like eligibility, syllabus of the exam, exam pattern and level of questions.

Check all the important details related to CDS 2023

NDA vs IIT Exam, Which is Tougher and Better

IIT JEE is a national-level engineering entrance exam consisting of two stages – JEE Main & JEE Advanced. JEE Main is a screening exam to select the candidates who will be eligible to appear for JEE Advanced, which will serve as the final exam to select candidates for admission into prestigious IITs. Every year, the IITs conduct a Joint Entrance Examination (JEE) to select candidates for the 4-year B.Tech, B.Pharm, 5-year B.Arch, Integrated M.Sc. and M.Tech courses whereas NDA (National Defence Academy) In  this exam only male candidates can apply. An aspirant can join any of the wing (Air Force, Army, Navy) as per choice, merit and vacancy. Here the candidate will get bachelor degree in arts, science (maths, chemistry, physics and computer science) and humanities arts.

NEET and JEE both are conducted after school level.

Only 300–400 students are selected after the SSB for the NDA, while only 9–10 thousand students can pass the JEE exam out of 15 lakh students who apply.

National Defense Academy produces the best cadets, who devote their lives to serving their country, IIT produces the best engineers of all time. Both the NDA and the IIT are considered to be among India’s most difficult exams. The selection percentage for IIT is 0.71 percent, whereas the selection ratio for NDA is 0.15 percent, according to statistics.

Let’s understand the nature of both exams –

Pattern of the IIT JEE Main and Advanced

NDA vs NEET, Which is Tougher and Better

Although exams like NDA and NEET are considered at a higher level than the normal student of class 12th can attempt but they still cannot be considered the toughest due to a limited syllabus and the kind of consequences of the exam- Getting admission in a college to become a doctor or an engineer. However, UPSC Exam has a different angle altogether. These land you into administrative services in an Indian city/ town or geographical location.

If you compare written papers only NEET exam is tougher in comparison to NDA examination. But NDA become more tougher overall as you have to clear Services Selection Board ( SSB) and Medical in addition to written test. Rejection ratio even on clearing written test is very high at SSB and Medical stage.

Is CDS and NDA are same?

NDA and CDS, both exam are conducted by UPSC. Both have different eligibility criteria. Check the detailed comparison in the article above.

Which exam is easy to crack NDA or CDS?

CDS is comparatively difficult when compared to NDA. NDA exam level is of senior secondary examination whereas CDS exam difficulty level if of graduation level.