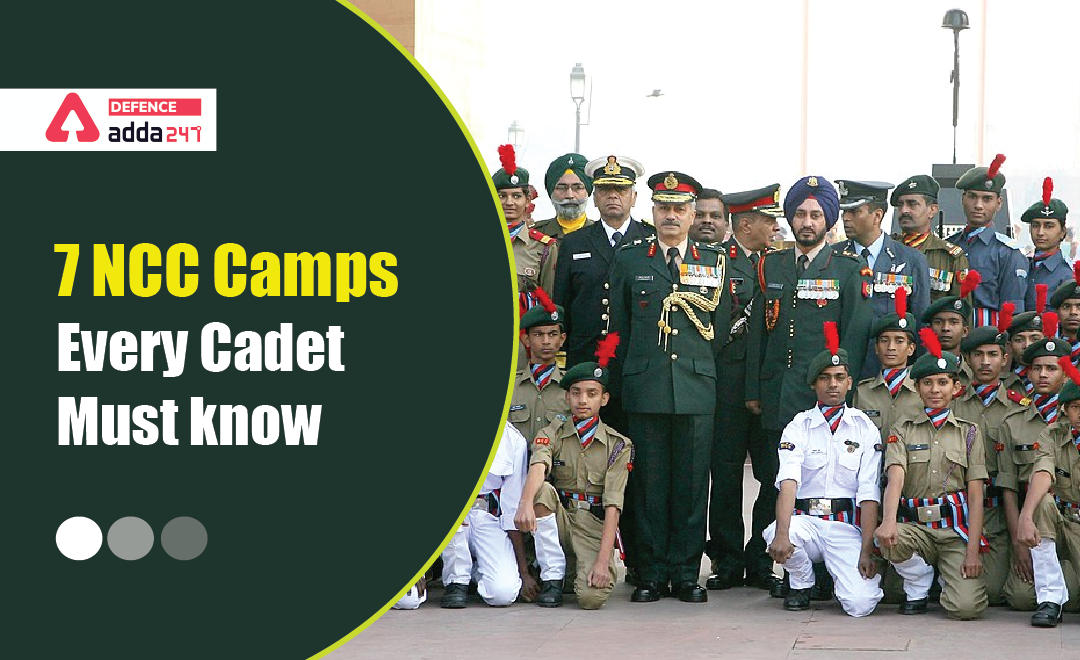 NCC the largest youth organization of the world which is regulated under the ministry of Defence. It was formed in 1948 under the National Cadet Corps Act of 1948 and since then it is shaping the lives of millions of cadets.

NCC helps in imbibing upon you the qualities of brotherhood, honesty, integrity, secularism, decision making, the training are not only meant for physical development but they also include mental and spiritual training, and thus making an individual a leader in all walks of life. Though joining NCC doesn’t make you a millionaire but you become more than that. It makes you a man of Values .The Qualities mentioned above are imparted through Institutional Training, and the camp training are organized to impart practical knowledge to the cadets.

Provided below are the Types of camp Organized by NCC

7 NCC Camps Every Cadet Must Know About Them

These Camps are conducted to make cadets aware of the rich heritage of cultures that is the connecting link of unity despite the diverse languages, traditions and religions of our country. These camps are conducted on an all India basis with the aim of  bridging the cultural gap among various states of India.

Six Advance Leadership Camps (ALC), are conducted every year, more then 1300 cadets attend these camps , in these camps lessons of  personality development, leadership skills and orientation  for induction into the Armed Forces are given .

Two TSCs are conducted at HQ DGCC Camp, Parade Ground, Delhi Cantt every year in Sep/Oct, one for SD/JD boys and other for SW/JW girls. 680 Boy and 680 Girl cadets take part in each camp.

This camp is for the Naval Wing Cadets. Boat pulling regatta and sailing competitions are the main activities of this camp. 560 cadets attend the camp.

This camp organised for Air Wing cadets,it  is attended by 600 cadets from all Directorates. VSC is generally conducted in the month of Oct and Inter Directorate competitions pertaining to air wing training are organised  during this camp.

Eight rock climbing camps are held each year to make  NCC cadets learn the basics of rock climbing and to inculcate spirit of adventure. A total of 1080 cadets attend the camps.

The basic aim of NCC camps is to carve out a responsible citizen out of a teenager by imparting quality lessons , following are some other objectives of NCC Camps.

The training is organized in different locations, usually the first day of camp involves inauguration ceremonies etc. the real training commence from the next day drill, theory, shooting, obstacle
trainings and Cultural practices etc start , the training also involves lessons like handling of weapons etc, various competitions are organised like Drill competitions , marathons etc.  every night cultural activities are also conducted to bring out the hidden talent of the Cadets.

Q.Which is toughest camp in NCC?

Q.How many camps are at NCC?
Ans. There are various camps organised by NCC , including six advance leadership camp, annual Training camp etc.

Which is toughest camp in NCC?

All India Thal Sainik Camp is regarded the toughest camp in NCC.

How many camps are at NCC?