Dear Students, Defence Adda is providing you all with this quiz on General Knowledge questions especially for CAPF and other Defence Examinations. Here is the list of questions for your practice.

As you all know it is necessary to have exam oriented for excelling the exam but it becomes hard to sort out the exam oriented material from the rest so we present you the Important General Knowledge Questions  for CAPF 2022 to get you out of this distress.

Static GK! the necessary evil in every aptitude exam, but you have to memorize it no matter what because this section play a very crucial role in setting you apart from others, and again every mark worth so give it a try. Our Questions will help you getting through it and indeed assist you in excelling this section in examination.

Q1. The name of Ram Prasad Bismil is associated with
(a) Kanpur Conspiracy Case
(b) Alipore Conspiracy Case
(c) Kakori Conpiracy Case
(d) Meerut Conspiracy Case
Q2. Which British Governor General introduced postage stamp in India?
(a) Lord Dalhousie
(b) Lord Auckland
(c) Lord Canning
(d) Lord William Bentinck
Q3. Which of the following statements regarding ozone layer within the atmosphere is/are correct?
1. It absorbs most of the ultraviolet radiation found in the Sun’s rays.
2. Chlorofluorocarbons are serious threat to the ozone layer.
Select the correct answer using the codes given below
(a) Only 1
(b) Only 2
(c) Both 1 and 2
(d) Neither 1 nor 2
Q4. Plants having thorny leaves and penetrating roots are classified as
(a) xerophytes
(b) hygrophytes
(c) mesophytes
(d) desert plants
Q5. Who was the Chairman of the Provincial Constitution Committee of the Constituent Assembly?
(a) Dr BR Ambedkar
(b) Pt Jawahar Lal Nehru
(c) Dr Rajendra Prasad
(d) Sardar Patel
Q6. The existence of a parallel economy/black money
(a) Make the economy more competitive
(b) Makes the monetary policies less effective
(c) Ensure a better distribution of income and wealth
(d) Ensure increasing productive investment
Q7. Magnetic permeability is maximum for
(a) paramagnetic substances
(b) ferromagnetic substances
(c) diamagnetic substances
(d) All of the above
Q8. The shape of carbon dioxide molecule is
(a) octahedral
(b) tetrahedral
(c) linear
(d) trigonal
Q9. Tallest tree is
(a) deodar
(b) Eucalyptus
(c) Sequoa
(d) None of the above
Q10. Which among the following statements about biofertilizers are correct?
1. Azotobacter is one of the nitrogen fixing bacteria used as biofertilizers.
2. They have to be applied to the leaves of the plants only.
3. They alter the chemical composition of the soil.
4. They can be used along with organic fertilizers.
Codes
(a) 1 and 4
(b) 1, 2 and 4
(c) 2 and 3
(d) All of these 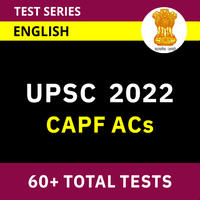 S1. Ans.(c)
Sol. The Kakori Conspiracy (or Kakori train robbery or Kakori Case) was a train robbery that took place between Kakori and, near Lucknow, on 9 August 1925. The robbery was conceived by Ram Prasad Bismil and Ashfaqullah Khan who belonged to the HRA (Hindustan Republican Association).
S2. Ans.(a)
Sol. During the reign of Lord Dalhousie , in 1952 ,first postage stamps were used in india at district scinde.
S3. Ans.(c)
Sol. Ozone in the stratosphere absorbs a large part of the Sun’s biologically harmful ultraviolet radiation. Chlorofluorocarbons (CFCs) and other halogenated ozone depleting substances (ODS) are mainly responsible for man-made chemical ozone depletion.
S4. Ans.(a)
Sol. A xerophyte is a species of plant that has adaptations to survive in an environment with little liquid water, such as a desert or an ice- or snow-covered region in the Alps or the Arctic.
S5. Ans.(d)
Sol. Provincial constitution committee is one of the major committee out of eight major committees, which was chaired by Sardar vallabhbhai patel.
S6. Ans.(b)
Sol. The existence of a parallel economy/black money makes the monetary policies less effective.
S7. Ans.(b)
Sol. A ferromagnetic material, such as iron, does not have a constant relative permeability. As the magnetizing field increases, the relative permeability increases, reaches a maximum, and then decreases
S8. Ans.(c)
Sol. The CO2 bond angle will be 180 degrees since it has a linear molecular geometry.
S9. Ans.(c)
Sol. The tallest trees in the world are redwoods (Sequoia sempervirens), which tower above the ground in California
S10. Ans.(a)
Sol. Azotobacter performs well if the soil organic matter content is high. Response to Azotobacter has been seen in rice, maize, cotton, sugarcane, pearl millet, vegetable and some plantation crops.