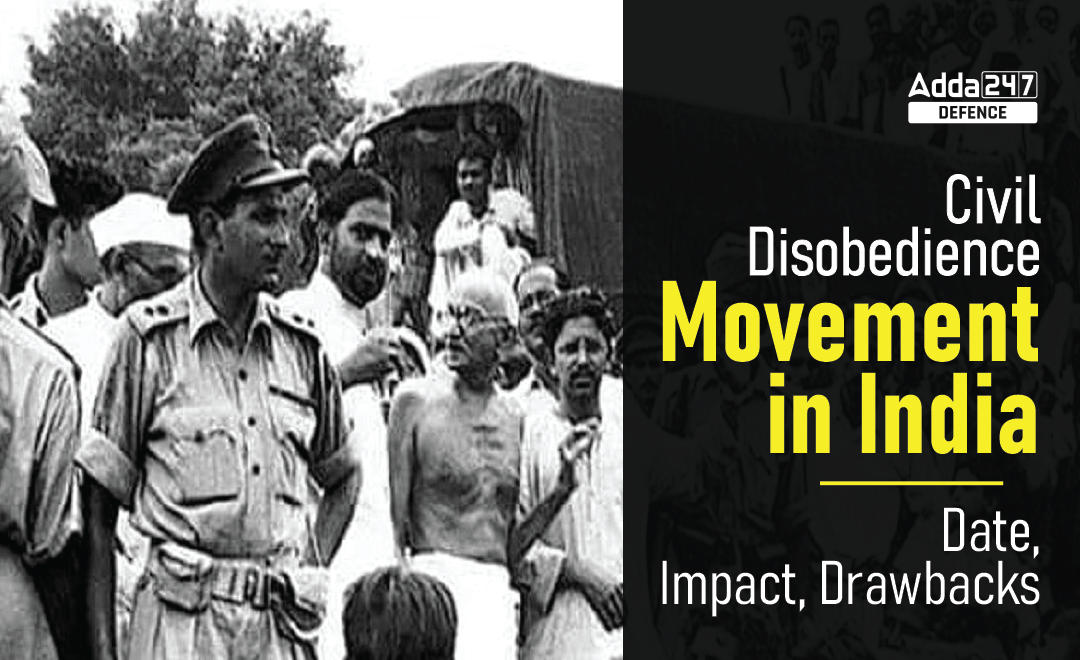 In the history of the Indian Independence movement, The Civil Disobedience Movement (CDM) played a very significant role in deciding the future of Free India. This movement of Mahatma Gandhi spread its roots in almost every part of the country and it was known for the participation of urban people and the people of lower castes.

After reading this article you will be able to understand every little detail related to it from its causes to its impact. It will just not help you in knowing the impactful movement by one of the most influential personalities of our country, it will also help you from an exam point of view as it is one of the most important topics in modern history. So let’s begin with its initiation in the next paragraph –

How did the Civil Disobedience Movement Start?

This movement was launched by Mahatma Gandhi. Gandhi had previously presented the British government with 11 demands including the abolition of the salt tax with a set deadline of January 31, 1930, to accept or reject these demands but they were ignored by then governor-general of India, Lord Irwin. Then with the permission of Congress Working Committee, He started the CDM which is also well-known as Dandi March.

Salt was the essential element of the campaign On 12 March 1930, the Salt march was initiated from Sabarmati and arrived in Dandi on 6th April where Mahatma Gandhi disobeyed the authorities by taking up a pinch of salt from sea evaporation and finally he broke the law.

A total of 78 members of the Ashram walked on foot from Ahmedabad to Dandi with Gandhi, covering a distance of around 385 kilometres. It was a journey of a total of twenty-four days in which they covered 10 miles per day and many people joined on the way.

This movement was supported by other people in different other parts of the country also such marches were held and the salt law was broken.

Causes of the Civil Disobedience Movement?

2. Anti-Simon Commission: The government of India Act 1919 announced that 10 years from now, in 1927, a royal commission will be set up to report on the working of the act and to formalize the constitution of India. Commission had only British members and it was rejected by Indian National Congress and other political organisations which gave an impetus to civil disobedience independence.

3. Rejection of Nehru Report: In 1928, A committee headed by Motilal Nehru, prepared a new constitution in Calcutta which was also known as the “Nehru Report” after rejecting the recommendations of the Simon Commission, “Nehru Report” talked about giving Dominion Status to India which was later not accepted by British Government but according to the Governor-General of India, Lord Irwin, the whole purpose of the constitutional reform was to grant India dominion status. After which, Gandhi and other activists requested a round table meeting to address the constitutional crisis. When the British government failed to respond positively to any of their demands, the civil disobedience movement was started.

Impacts of the Civil Disobedience Movement

Drawbacks of the Civil Disobedience Movement

Although it proved to be quite effective to create a base for the Indian Independence Movement which ignited the spark of freedom but everything comes with certain Drawbacks, so does the Civil Disobedience Movement:

As Second Round Table Conference proved to be futile and Gandhi returned to India without achieving anything as expected. Then it led to certain further events like –

Q1. CDM in India was led by whom?
Answer: Civil Disobedience Movement was primarily launched by Mahatma Gandhi.

Q2. What was the starting date of Civil disobedience Movement?
Answer: It was started on April 6, 1930.