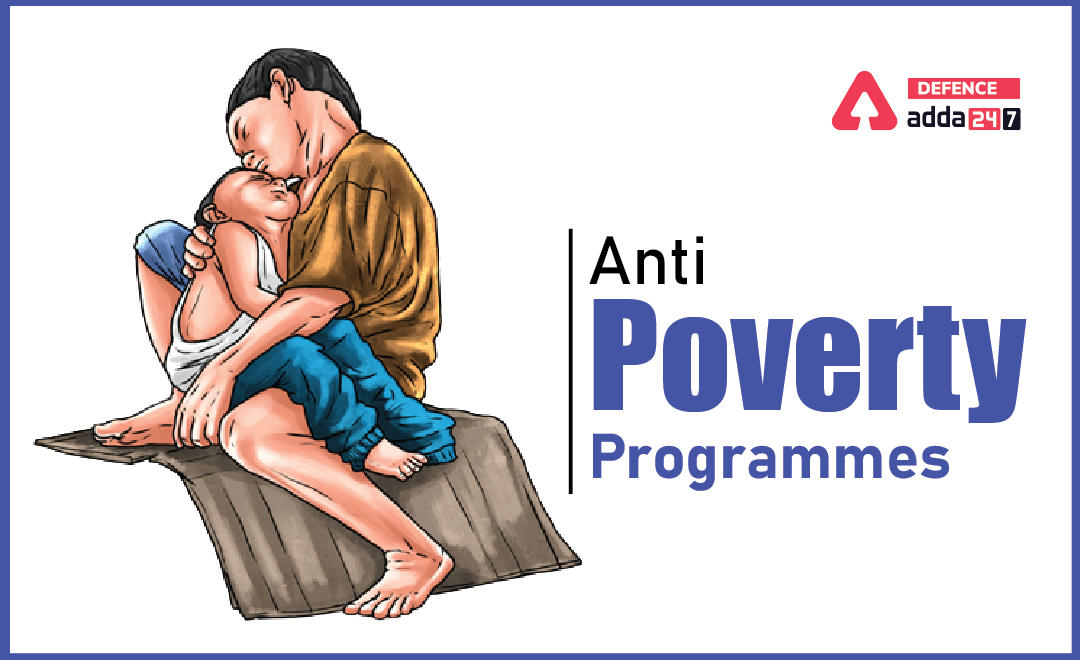 India is a developing country which is facing many advancements and growth in its economy with the time but poverty remains one of the biggest challenge to deal with. India has been suffering from the menace of poverty from a very long time and government has been trying hard to eradicate poverty from the country through various government schemes and planning.

Various welfare programmes have been started by the Indian government to take India out of the poor state. In this article we have discussed such programmes and their details. Check the list below  –

It was introduced in the year 1978-79 and was implemented from 2nd October, 1980. The main aim is to improve the living conditions of the poor by providing them support in getting employment opportunities and by developing various skills through this scheme.

Till date, this programme has proved to be the most effective as a poverty alleviation programme. Under this programme, those who fall below the poverty line financial assistance are provided with government subsidies as well as loans or credit from financial institutions to make a way for various self employment opportunities.

With the merger of two schemes, National Rural Employment Programme (NREP) and Rural Landless Employment Guarantee Programme (RLEGP) , a new scheme Jawahar Rozgar Yojana (JRY) was launched in 1989. The purpose was to provide better employment opportunities for the unemployed in rural areas by focusing on economic infrastructure, community and social assets.  Expenditures were shared between central & state in 80:20 ratios.

It was revamped as Jawahar Gram Samriddhi Yojana (JGSY) in 1999, to work upon rural economic infrastructure with the purpose of generating better employment opportunities.

It was launched on 2nd of October in 1993. It mainly covered the areas where the Revamped Public Distribution System was in operation, especially the rural districts and blocks in 1993 which were drought prone areas, desert, tribal and hill area blocks. With the time it kept extending to several other blocks. Employment assurance scheme was planned for creating employment opportunity in the form of manual work during the lean agricultural months and to provide better infrastructure and community assets in order to provide sustained livelihood to rural population.

In 1996, it was merged with Jawahar Rozgar Yojana and presently the scheme is applicable throughout the country without no special conditions through a redesigned program started in the year 2000. In 2006, the scheme was totally merged with the famous scheme, Mahatma Gandhi National Rural Employment Guarantee Act (MGNREGA).

It is considered to be one of the most successful scheme of the government which was launched in the year 2000, the Food for Work Programme was started as a component of Employment Assurance Scheme. It started with some major drought-affected states, like Maharashtra, Rajasthan, Orrisa, Gujarat, Himachal Pradesh, Madhya Pradesh, Uttaranchal and Chhattisgarh. The main aim is to enhance food security through wage employment and also distributed free food to poor downtrodden people of India. In the initial stage, the unskilled laborers were offered food instead of wages at the work site.

Sampoorna Gramin Rozgar Yojana (SGRY) Scheme launched On September 25, 2001, was the amalgamation of old Jawahar Grameen Samriddhi Yojana, Employment Assurance Scheme and Food for Work Programme. The primary aim of the scheme was the generation of wage employment, creation of good economic infrastructure in rural areas as well as food provision and nutrition security for the underdeveloped.

Under this programme, Wages are distributed and food grains are provided to individuals who fall below the poverty threshold.

PMGAY is a government flagship programme aims at providing housing for the rural poor in India. A similar scheme for urban poor was launched in 2015 as Housing for All. Similar scheme started in 1985 was known as the name of Indira Awaas Yojana. Along with the pucca house, beneficiaries will also be able to avail other facilities of electricity, water, road connectivity etc.

It is one of the National Social Assistance Program (NSAP) of the Ministry of Rural Development which was named as NOAPS, launched in 1995. Pension to citizens of India and also the refugees is provided as per this scheme. Those who are above 60 and does not have any means of subsistence can be the beneficiaries of this project. It is provided by the central government. Responsibility of implementation of this scheme at various areas of the country is given to panchayats and municipalities.

This scheme was launched in the year 1995 and is sponsored by state governments, under community and rural department. Monetary help is provided to a member of family who becomes the head of the family if the primary breadwinner of the family passes away.

Under NMBS certain amount is provided to women in three instalments. Cash benefits are provided to pregnant or lactating women in their bank account directly to meet enhanced nutritional needs and partially compensate for wage loss. The women must be older than 19 years. It is normally provided eighth to twelfth weeks before the birth of child. And in case of the death of the child, the women can still avail it. Main implementing bodies are Anganwadi Centre (AWC) and ASHA/ ANM workers.

The Pradhan Mantri Ujjwala Yojana was launched on 1st May 2016 with the focus on protecting the health of women and the household  from consumption of unhealthy fuels by providing them with clean cooking fuel in the form of LPG.
Moreover it also reduces casualties that occur as a result of unclean fuels and control respiratory issues due to consumption of unhealthy fuels. Other than focusing on the health of women, this scheme also seeks to empower women in rural India by issuing connections under the name of the women in the household.

The Pradhan Mantri Garib Kalyan Yojana (PMGKY) was launched on 17th December 2016 under the Ministry of Finance. The Pradhan Mantri Garib Kalyan Yojana allows individuals to deposit money that has not been taxed. Under the scheme, 50% of the untaxed amount must be paid. The scheme was initially valid from December 2016 to March 2017. However, it was later extended during pandemic by the Finance Minister launched the PM Garib Kalyan Package on March 26th, 2020 for the BPL families. It includes various An Insurance Cover of Rs. 50 Lakh, Free Pulses for the next 3 months under PM Garib Kalyan Ann Yojana,  Benefit to farmers, To help the low wage earners in organized sectors etc.

It is the flagship programme of Indian Government to improve nutritional outcomes for children, pregnant women and lactating mothers. It is supported by the backing of a National Nutrition Strategy prepared by the NITI Aayog with the goal of attaining “Kuposhan Mukt Bharat” or malnutrition-free India, by 2022. Half of the total budget comes from the World Bank or other multilateral development banks and the rest of it is covered by centre which is further divided into 60:40 between the Centre and the States,

Pradhan Mantri Shram Yogi Maandhan is a government scheme meant for old age protection and social security of Unorganized workers. It is for Unorganized Workers (UW) between the Age 18 to 40 years and Monthly Income up to Rs 15000. Under this scheme they get the Assured Pension of Rs. 3000/- month, Voluntary and Contributory Pension Scheme and Matching Contribution by the Government of India.

Pradhan Mantri Jan-Dhan Yojana is a government scheme launched by the government of India to provide easy access to financial services such as Remittance, Credit, Insurance, Pension, Savings and Deposit Accounts to poor and downtrodden section of the society, particularly for those who do not have access to a bank account. Under this scheme account can be opened by individuals. However, to get the access to the cheque facility, minimum balance is mandatory to have in the account. No amount needs to be paid by the individual to open an account under the PMJDY scheme.

The Pradhan Mantri Kaushal Vikas Yojana (PMKVY) is a flagship scheme which is focused on skill training. It is managed by the Ministry of Skill Development and Entrepreneurship (MSDE), Government of India (GoI). It is being implemented by the National Skills Development Corporation (NSDC). The main objective is to encourage and promote skill development for the youth allover the country

Sansad Adarsh Gram Yojana (SAGY) is a project aimed at village development. It was launched by Government of India on 11th October, 2014. Under this scheme, each Member of Parliament will take the responsibility of development of certain number of villages. The goal is to develop three Adarsh Grams by March 2019, of which one would be achieved by 2016. Thereafter, five such Adarsh Grams (one per year) will be selected and developed by 2024.

It guarantees hundred days of employment in every financial year to adult members of any rural household willing to do public work-related unskilled manual work at the statutory minimum wage. The Ministry of Rural Development (MRD), Govt of India is monitoring the entire implementation of this scheme in association with state governments. The goal of the Act is to provide livelihood security in rural areas.