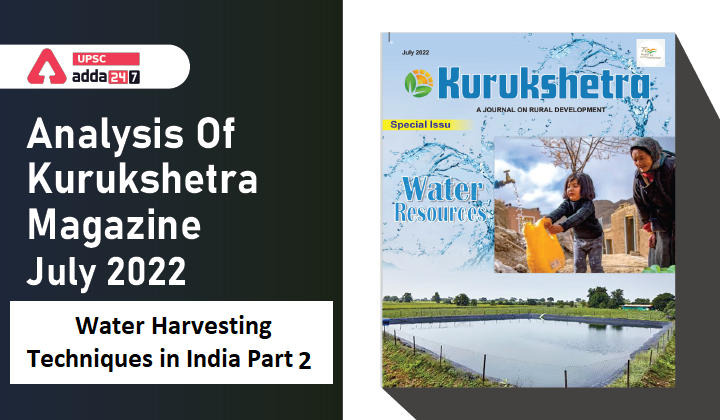 What is Indo-Gangetic plain?

Indo-Gangetic plain is full of rivers and their floodwaters. It stretches from Haryana-Punjab in west to West Bengal in the east.

A few important water harvesting systems in this region are mentioned below:

It is a traditional floodwater harvesting system prevalent in Bihar. Ideal terrain for Ahar-pyne should have an evident slope, sandy soil, low groundwater level and flood during monsoon. The slope is an average of one meter per km from south to north. In combination, these factors make floodwater harvesting a best-suited option.
The Ahar-Pyne system received a death blow under the nineteenth-century British colonial regime.

In old times, inundation canals were a popular and efficient irrigation system in Bengal. Floodwater entered the fields through the inundation canals, carrying not only rich silt but also fish, which swam through these canals into the lakes and tanks to feed on the larva of mosquitoes. This helped to check malaria in this region. This ancient system of overflow irrigation had lasted for thousands of years.

Dungs or Jampois are small irrigation channels linking rice fields to streams in the Jalpaiguri district of West Bengal.

Zings are water-harvesting structures popular in Ladakh. These are small tanks, in which melted glacier water is stored. The essential component of this storage is the network of guiding channels that brings the water from the glacier to these tanks. As glaciers melt during the day, the channels fill up with a trickle, that in the afternoon turns into flowing water. The water is collected by the evening, and is used the next day. A local water official called the Churpun ensures that water is equitably distributed.

Ghul In the high altitude of Himalayan region, water is tapped from hill slops known as Ghuls. Ghuls may be as long as 15 km. A Ghul normally carries a discharge of 15 to 100 litres of water per second. In the entire region of Western Himalaya comprising Jammu, Himachal Pradesh and Northern Uttarakhand, Ghul is a standard harvesting technique. While constructing a Ghul, a cut is made in the stream, which is further extended by stone embankment, generally made of a pile of stones.

Important water harvesting systems in the Deccan and Maharashtra

In Maharashtra and Deccan, the elevation ranges from 1,000m in the south to 500m in the north.

The rainfall is low to moderate. Many kinds of irrigation systems were in vogue in the region such as the wells, embankments across rivers and streams, reservoirs, tanks, etc.

Kohli Tanks are called so because of the name of a group of cultivators who built these tanks three centuries back. A network of channels to practically carry water to every house was in existence in the Bhandara district of Maharashtra. The tanks were built on the slopes of the Gaikhuri range. The larger tanks were on the higher slopes, while the smaller ones were placed in the foothills. These tanks constituted the backbone of irrigation in the area until the government took them over in the 1950s. These are considered crucial for sugar and rice irrigation even today.

These are a traditional system of check dams or diversion weirs built across rivers. These check dams also impound water and form a large reservoir called Bandhara. They raise the water level of the rivers so that the water flows into the channels. The water supply would usually last for a few months after the rains.

This traditional water harvesting system is more than four centuries old. Managed by the community, this irrigation system is prevalent in north-western Maharashtra. The system operated on three rivers in the Tapi basin – Panjhra, Mosam and Aram – in Dhule and Nasik districts. At few places it is still used.

Kere Tanks, called Kere in Kannada, were the predominant traditional method of irrigation in the central Karnataka plateau and were fed either by channels branching off from Anicuts (check dams) built across streams or by streams in valleys. The outflow of one tank supplied the next all the way down the course of the stream; the tanks were built in a series, usually situated a few kilometres apart. This series of tanks avoided the wastage of water through overflow and also ensured that the seepage of a tank higher up in the series would be collected in the next lower one.

The Ramtek model has been named after water harvesting structures in the town of Ramtek, Maharashtra. Impressive at sight with its pillars, columns and compartments enclosing artificial water pond, Ramtek model is an intricate network of groundwater and surface water bodies. These water bodies are intrinsically connected through surface and underground canals. This model harvests runoff through tanks, supported by high yielding wells and structures like Bawries, Kundis, and waterholes.