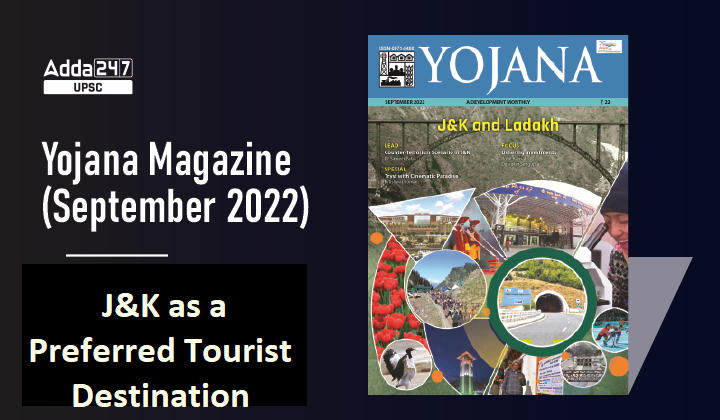 This topic-wise analysis is prepared from the Septeber 2022 edition of the monthly Yojana Magazine.

What J&K Administration is doing?

What is J&K Tourist Village Network under Mission Youth?

Potential of J&K as a Tourism Destination

Some Attractions of J&K

It is a traditional folk theatre style combination of play and dance in a satirical style where social traditions , evils are depicted and performed in various social and cultural functions. Bhand Jashan is performed by a group of 10 to 15 artists in their traditional style accompanied by light music for the entertainment of people.

It is the most popular form of Kashmiri folk music. It has some resemblance with chakra of mountaineous regions of Uttar Pradesh. Normally Garaha, Sarangi, and Rabab were the musical instruments used in the past. But now the harmonium too has made its way in its presentation.

Sufiana Music came to Kashmir from Iran in the 15th century. Over the years it has established itself as the classical music form of Kashmir and has incorporated a number of Indian Ragas in its body. Hafiz Nagma in fact, used to be part of sofiana music. The instruments used in this form are Santoor, Sitar, Kashmiri Saz, Wasool or Tabala. In Hafiz Nagma a dancer is a female while her accompanists on various instruments are males. Hafiza moves her feet on musical notes.

Role of Film Policy of J&k 2021 in Tourism Development