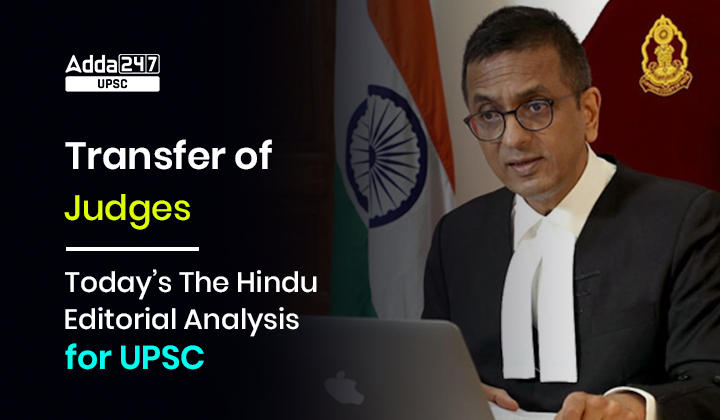 Relevance of the Issue of ”Transfer of Judges” for UPSC CSE

Why the issue of Transfer of Judges in news?

Lawyers recently raised the matter of the transfer of a Gujarat HC judge (Justice Kariel) to the Chief Justice of India (CJI), citing rumours that the Gujarat HC Chief Justice was uninformed of the impending transfer.

Issues in the Collegium’s Functioning

Constitutional Provisions on the transfer of judges

Need for Transparency in Transfer of Judges

What is the existing Memorandum of Procedure on Transfer of judges?

The Working of Supreme Court Collegium

Landmark Judgements of the Supreme Court on Transfer of Judges

Is it time to re-examine some of what the three-judge bench held in K Ashok Reddy Case?

Collegium System for the Appointment of Judges

When the judiciary misses no opportunity to uphold the basic structure doctrine and preserve at all cost its independence, there is a need for transparency in judicial functioning to dispel all notions of favoritism, bias or governmental interference. It is not just in the “public interest” but also for the larger good of the judicial institution.

Q. Which article deals with the issue of transfer of judges?

Ans. Article 222 of the Constitution deals with the transfer of judges and states that the President may, after consultation with the Chief Justice of India (CJI), transfer a judge from one high court to another.

Q. What does existing Memorandum of Procedure says about consent before transferring a judge?

Ans. The existing Memorandum of Procedure on transfer of judges is clear that a judge’s consent is not necessary to eﬀect a transfer.