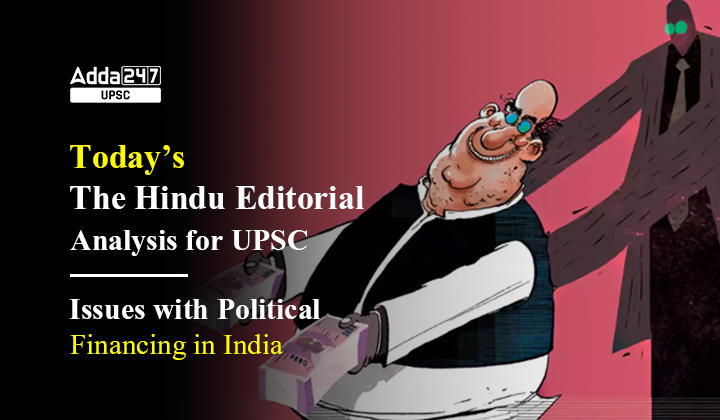 Why the issue of Political Financing is significant for UPSC?

If we take the syllabus, Political Financing covers GS 2: Structure, organization and functioning of the Executive and the Judiciary—Ministries and Departments of the Government.

Why Political Financing is in news?

The electoral bonds ended all the safeguard that were present in corporate donations to Political parties through Companies Act. As, Indian, foreign and even shell companies donate to political parties without any need to inform anyone about the contribution.

The scheme was brought in through amendments to finance bill as the government did not have majority in the Rajya Sabha. It was criticised for bypassing the parliamentary provisions

What is political competition?

How the nature of political ﬁnance influences political competition?

The controversial history of political financing in the Indira Gandhi Regime

FAQs on the issues of Political Financing in India

Q. Who can purchase electoral bonds in India?

Ans. The provisions of the Electoral Bond Scheme 2018 mandate, electoral bonds may be purchased by a person, who is a citizen of India or incorporated or established in India.

Ans. Indira Gandhi banned corporate donations in 1969 in order to limit the growth of the Swatantra Party and the Jana Sangh, who she feared were increasingly attracting corporate backers.

Q. Who can receive electoral bonds?

Ans. Only the political parties registered under Section 29A of the Representation of the People Act, 1951 (43 of 1951) and which secured not less than one percent of the votes polled in the last general election to the house of the people or the legislative assembly of the state, shall be eligible to receive the electoral bonds.

Who can purchase and who can receive electoral bonds?

Electoral bonds can be purchased by Indian citizens. A person can buy Electoral Bonds, either singly or jointly with other individuals. Only the political parties, which secured not less than one per cent of the votes polled in the last general election or a legislative assembly, shall be eligible to receive the Electoral Bonds.