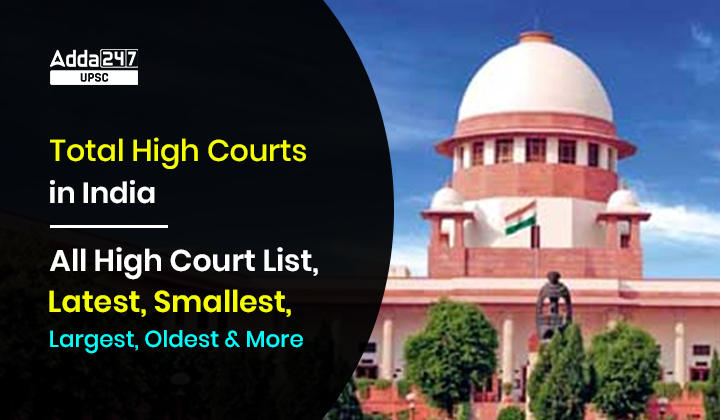 In India, Indian Constitution provides that the High Courts in States are the highest court of the State and all other courts of the State work under it.

There are total 25 High Courts in India across all the states and Union Territories (UTs).

The Indian High Courts Act 1861 proposed the formation of High Courts in the three Presidency cities of Calcutta, Madras, and Bombay in place of the Supreme Court.

The newest High Courts are the Telangana Court and Andhra Pradesh High Court, both established in the year 2019.

In every High Court, there is a Chief Justice and many other judges whose number is defined by the President of India.

Though high courts in India are functioning since 1862 but after India’s Independence, the Indian Constitution has provided a detailed framework and guidelines based on which various aspects of High Courts are managed/administered. Few important constitutional articles are mentioned below-

Article 214: According to Article 214, each state of India shall have a High Court.

Article 221: A judge of the High Court is entitled, under Article 221, to the pension and leave-of-absence benefits that Parliament may occasionally decide upon. After a Judge is appointed, nevertheless, this cannot be altered to his detriment.

How many High Courts are there in India?

There are total 25 High Courts in India across all the states and Union Territories (UTs).

After India’s independence, the constitution provided that each Indian state must have its own High Court in accordance with Article 214 of the Indian Constitution.

Two or more High Courts can also have a common high court as per Article 231 of the Indian Constitution.

Following above guidelines and principles, India has over the period of time established a total 25 High Courts for all the states and Union territories.

After India gained its independence, the entire legal system changed, and rules issued by the British were different from those found in the Indian Penal Code.

Which is the Newest High Court of India?

In 1928, Jammu & Kashmir high court was established. Post-bi-furcation of J&K into two union territories- J& K and Ladakh, there is now a common high court. So the Jammu and Kashmir High Court is not the Newest as it was already there since 1928.

High Courts in India having Jurisdiction in more than two states

Ans. There are 25 High Courts in India at present. These 25 High courts along, with the Supreme Court of India, form India’s Judicial System.

Ans. The states of Punjab and Haryana have a common High Court in Chandigarh.

Ans. Calcutta High Court is the oldest in the country and was established in 1862.

Ans. Allahabad High Court has the largest number of judges that counts to 160 judges.

What is Supreme Court’s Jurisdiction Under Article 142?