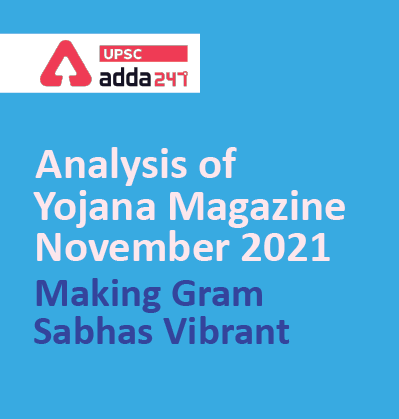 These Gram Sabhas, being the direct representative platform, which includes the voters of the village/Gram panchayat, have been vested with the powers for direct supervision of the rural programmes and projects, and to ensure accountability of Gram Panchayats.

Article 243: Defines Gram Sabha as ‘a body consisting of persons registered in the electoral rolls relating to a village comprised within the area of panchayat at the village level’.

Article 243A: A Gram Sabha may exercise such powers and perform such functions at the village level as the Legislature of a State may by law provide.

Who decides the powers and functions of the Gram Sabha?

Need and Relevance of Gram Sabhas

How to enhance the functioning of Gram Sabhas?

By facilitating participative democracy, the Gram Sabhas will not only contribute to the socio-economic development of the villages but also create collective transformational change in the rural areas of the country.