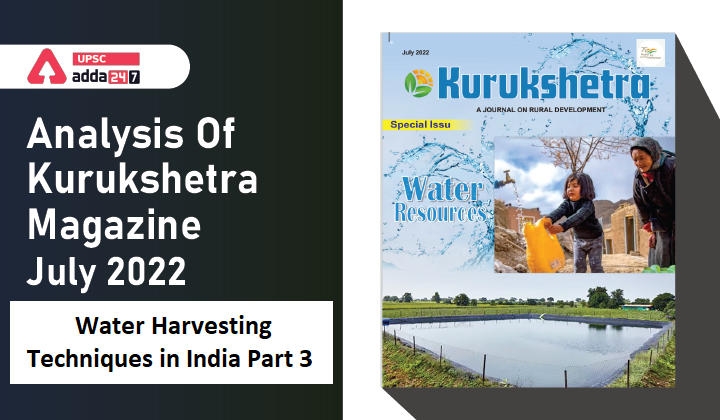 Tankas are underground small tanks and are popular in Bikaner. Tanka is a round or rectangular underground room in a house that functions as a water tank. Rainwater from the roof or terrace is directed towards an opening in the floor that leads to the Tanka. Rainwater is collected in these circular holes, lined with fine polished lime, made in the ground.

In the western arid areas of Rajasthan, kunds are water-harvesting structures. Kunds have a saucer-shaped catchment area that gently slopes towards the centre where the well is situated. A wire mesh across water-inlets prevents debris from falling into the well pit. The sides of the well-pit are generally covered with lime and ash. Most pits have a dome shaped cover or a lid to protect the water. Kunds are constructed where the groundwater availability is limited and salinity is moderate to high. Locally available material like pond silt, charcoal ash and small gravels are used to make catchment areas of the Kunds. The depth and diameter of Kunds usually depend on consumption patterns. It is an ideal system for desert areas where rainfall is scant.

Kuis or Beris dug mostly in western Rajasthan, the Kuis are 10-12 metre deep pits in the vicinity of tankas to collect leaking or oozing water. When 6 to 10 Kuis are constructed together, the entire system is then called Paar system. Rainwater harvested through such system is called Patali Paani.

The Khadin system is a runoff agricultural system, in which, the runoff water from the high catchment area is stored with the help of a Khadin bund where it is impounded during the monsoon season. This water is then used for irrigation. The Khadin soil remain moist for a long period because of water storage and chemical weathering, decomposition along with the activities of the microbes, which eventually raise the organic matter and other nutrient content of the soil.

Khadin have functioned efficiently for centuries maintaining the soil fertility. The Paliwal Brahmins of Jaisalmer are said to be the pioneers of this technique in the 15th century. The king gave lands to the Paliwals and asked them to develop Khadins on the land.

A nadi is the local name of a village pond used for storing rainwater from the adjoining natural catchment areas. These were very common in Jodhpur. Based on available natural catchments and its water yielding potential, site for a nadi was selected. The location of the nadi had a strong bearing on its storage capacity due to the related catchment and runoff characteristics. Unfortunately, because of poor maintenance and negligence, destruction of catchment areas and unplanned urbanisation, most of the nadis have been severely polluted.

A talab is a water harvesting structure constructed in valleys and natural depressions. They are used as reservoirs. Some talabs have wells in their beds. Such well-decked talabs are called beris. The existing oldest talab in Rajasthan is Ranisar. It was constructed in 1490 AD.

Virdas are shallow holes, which are made in the sands of dry riverbeds and lakes for collecting drinking water. They are found all over the Banni grasslands, a part of the great Rann of Kutch in Gujarat.

Naada/Bandha Naada/bandhas are found in the Mewar region of Rajasthan. It is a stone check dam that is constructed across a stream to capture monsoon runoff on a stretch of land. Because of submergence in water, the land becomes fertile as silt deposits on it and the soil retains substantial amount of nutrients.

Johads are small earthen check dams that store rainwater. They constitute high elevation in three sides; a storage pit, and excavated soil on fourth side. Some johads are interconnected through deep channels, with a single outlet in a river or stream to prevent structural damage.

Stepwells are India’s most unique contribution to the water architecture. They are called vav or vavadi in Gujarat, and baolis or bawdis in northern India.

Eleventh century made Mata Bhavani’s vavat in Ahmedabad is said to be one of the earliest stepwells. Rani ki vav (Queen’s well) at Patan was built few decades after that is the grandest among all vavs. Some other fine examples of stepwells in Gujarat are Dada Harir’s vav in Ahmedabad, and the octagonal vav at Adalaj, Gandhinagar.

Bawaris were unique stepwells used for water storage in the cities of Rajasthan in medieval times. Scant rain received would be diverted to these man-made tanks through canals built on the hilly outskirts of cities. These, like all traditional water harvesting systems, helped in recharging a deep and intricate network of aquifers.

Jhalara is also a local name given to manmade stepwells used for community water needs and for religious rites purposes. Often rectangular in design, jhalaras have steps on three or four sides. These stepwells collect the subterranean seepage of an upstream reservoir or a lake. Jhalara in Jodhpur is Mahamandir Jhalara, which dates back to 1660 AD.

Chauka System In Jaipur, Rajasthan, degraded pastures have been dyked to form Chaukas to harvest rain. The Chaukas are rectangular plots arranged in a zigzag pattern and lie along a small gradient. Dykes with height of 1.5m are built along the three sides that lie towards the lower part of the gradient. Trees are also planted on the dykes to withstand rain. When it rains, water gets collected in the dyked lower half of the Chauka.