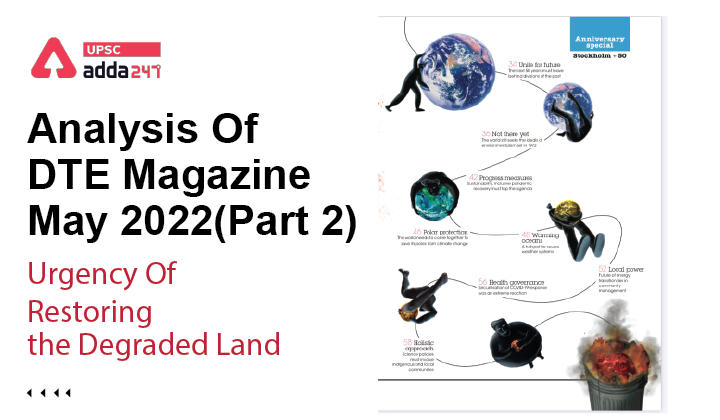 – Around 40 per cent of the land across the globe is now de-graded.
– This is affecting half of hu manity and threatening US $44 trillion in economic output, which is over half of the global gdp (gross do- mestic product) in 2021.

– This report was released by the UN Convention to Combat Desertification (unccd).
– This report was released on April 27, shortly before its 15th Conference of the Parties in Abidjan, Côte d’Ivoire.
– The report warns that at the current trend, an additional 1.6 billion hectares (ha), or an area almost the size of South America, will be degraded.
– This will lead to severe climate-induced disturbances that will disrupt food supply, cause migrations and accelerate species extinction.
– The report also estimates that an additional 69 gigatonnes of carbon emissions will be released from 2015 to 2050 due to land-use change, soil degra- dation and slowed agricultural yields.

What if we move consciously?

– The report also offers a vision of benefits that could accrue by 2050 if humanity acts to restore landscapes and reverse this trend.
– The returns from a regenerative restoration economy that reduces greenhouse gas emissions, land degra-dation and biodiversity loss are estimated to be worth $125-140 trillion annually—up to one and a half times global gdp, acknowledging the economic benefits of reversing land degradation amid rapid natural deterioration.

– The UN’s Sustainable Development Goals include “land degradation neutrality” as a target, and at least 115 countries have already committed to restore 1 billion ha by 2030, as per to a 2020 study by the Netherlands Environmental Assessment Agency.
– India has pledged to restore 26 million ha. glo2 says this will cost $300 billion every year.

What should be done to meet the pledges?

– Governments will be able to meet current pledges by repurposing subsidies given to the fossil fuel and agricultural industries, which total $700 billion every year.
– In fact, restoring 15 per cent of converted or degraded lands in priority areas can sequester up to 300 gigatonnes of carbon.

The need to rethink our food system

– We need to urgently re-think our global food systems, which are responsible for 80 per cent of deforestation, 70 per cent of freshwater use and the single greatest cause of terrestrial biodiversity loss.
– The ongoing destruction of nature for food production (such as extensification) is now encroaching on some of the most carbon-rich ecosystems on the planet.      – This in turn reduces yields, forcing farmers to use harmful agrochemicals.
– To reverse this trend, the report recommends conservation agriculture (low-or no-till farming), agro- forestry and silvo-pasture, improved grazing management, grassland rehabilitation and forest plantations.
– It also lauds India’s emphasis on zero-budget natural farming.

No to Mono-Culture Plantation

– The report cautions against “mono- culture plantations” as was seen under the Bonn Challenge—a global goal to restore 150 million ha of degraded and deforested land by 2020 and 350 million ha by 2030.
– As recent studies show that nearly half the area pledged in Africa, Asia and South America is earmarked for monoculture plantations, mostly fast-growing exotic species.
– These areas will lose out on benefits of naturally regenerating forests.
– For the first time, the report recommends scaling up the land rights of indigenous peoples and local communities to ensure the success of nature restoration projects.