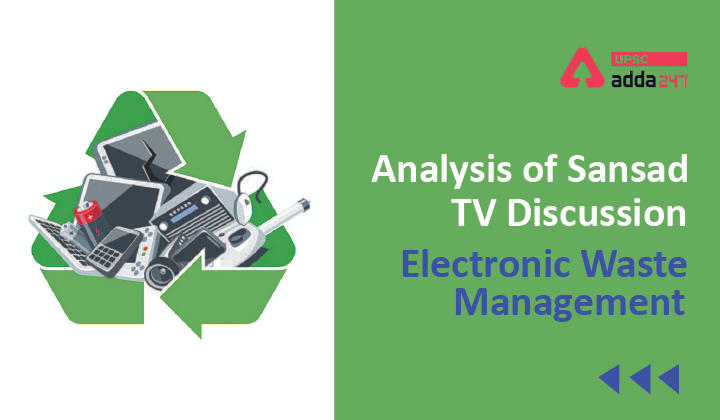 • India is the fastest growing economy, wherein electronics play the key driver.
•The rapid innovation in technology has resulted in improved electronic products, besides faster obsolescence of old products, thereby creating an unmanageable volume of electronic waste (e-waste).
• Its availability and widespread use have enabled much of the global population to benefit from higher standards of living.
• However, the way in which we produce, consume, and dispose of e-waste is unsustainable.
• E-waste contains several toxic additives or hazardous substances such as mercury, brominated flame retardants (BFR), CFCs and HCFCs.

• The increasing levels of e-waste, low collection rates, and non-environmentally sound disposal and treatment of this waste stream pose significant risks to the environment and to human health. Improper management of e-waste also contributes to global warming.
• According to Global E-waste Monitor 2020, the world generated a striking 53.6 Mt of e-waste in 2019 which is an average of 7.3 kg per capita.
• The growing amount of e-waste is mainly fueled by higher consumption rates of Electronic equipments, short life cycles, and few repair options.
• Since 2014, the number of countries that have adopted a national e-waste policy, legislation or regulation has increased from 61 to 78.
• The countries of the European Union (EU) and other developed countries are adopting scientific methods of recycling and disposal of such waste.
• The EU defines this e-waste stream as ‘Waste Electrical and Electronic Equipment’ (WEEE). The main features of the WEEE include the definition of ‘EEE’, its classification into 10 categories and its extent as per voltage rating of 1000 volts for
alternating current and 1500 volts for direct current.
• In India E-Waste (Management) Rules were notified in March 2016  and amended in 2018 for providing environmentally sound systems for disposal of e-waste.