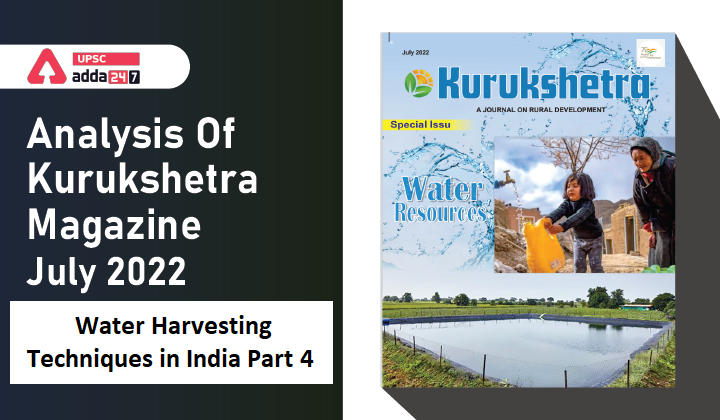 A Yeri was a large earthenware tank dug out of the ground with the dugout mud making the side walls or bunds.

Surangam is a horizontal cave excavated in the mountains with super-condensed soil or rocks. The excavation itself is a tedious endeavour.

Nicobar’s physiography, topography, type of rocks and variation in rainfall, has encouraged the local tribes to develop different water harvesting structures. The split bamboos serve as channels for rainwater that is collected drop by drop in pits called Jackwells.

Water Harvesting Techniques in India: How To Revive Water Bodies?

Important actions and consideration that need to be undertaken to revive water bodiesare as follows.

1. Focus should be on sustainability. Therefore emphasis should be on long-term goals, operation and maintenance, adequate budget, and ownership and responsibility to the people.
2. Economic, environmental and social impact of the project should be studied in detail before hand and reviewed in between for the course correction, if needed. Local communities need to be involved in all these planning and reviews.
3. Encouraging local people to collaborate with other stakeholders to successfully utilise resources should be done to ensure the protection and conservation of water bodies.