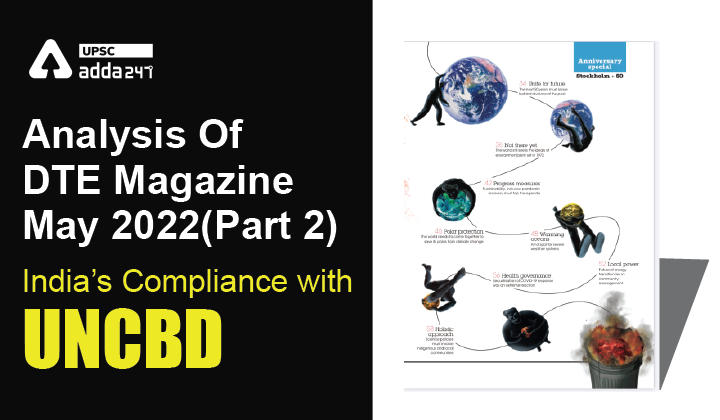 – The world adopted UN Convention on Biological Diversity (cbd) in 1992 at the Rio Earth Summit in Brazil.
– The Convention is the only international instrument that addresses biological diversity comprehensively.

– CBDs objective is to conserve biological resources (flora, fauna and the germplasm) along with the traditional knowledge associated with them, to ensure that the resources are sustainably used and there is fair and equitable sharing of the benefits arising out of the utilisation of biodiversity.

– India, home to 7 to 8 per cent of the world’s recorded species, has since been at the forefront in complying with cbd protocols.
– India ratified cbd in February 1994 and in 2002, enacted the Biological Diversity Act.
– Soon, a decentralised system was set up to implement the law (Three-tier security).

– The National Biodiversity Authority (nba) was established in 2003 to be at the helm and provide advice to the Union and state governments on conservation, sustainable use, and access and benefit sharing.
– The authority also regulates access of biological resources by international agencies.

The biodiversity boards at the state ensure conservation of biological resources along with the regulation of access by national entities.

– In addition, under the Biological Diversity Act 2002, biodiversity management committees (bmc) have been set up at the panchayat level.
– These village committees have to ensure that the biodiversity in their area is mapped in the People’s Biodiversity Register.
– The national and state biodiversity boards are required to consult and get approval from these village-level committees for the use of biological resources and knowledge that is recorded in their registers. bmcs can also impose charges and fines for extraction of these resources, found in their villages.

What are India’s ABS regulations?

– In 2010, the Nagoya Protocol was adopted as a supplementary agreement to cbd and it came into force on October 12, 2014.
– India was quick to ratify this too, and issued “Access to Biological Resources and Associated Knowledge and Benefits Sharing Regulations” (abs regulations) that year.
– As per the regulations, users of biological resources and associated knowledge must share a percentage of their profits with communities who have been holders of the knowledge of the resource.

– The 2002 World Summit on Sustainable Development at Johannesburg agreed on need of an instrument to ensure fair and equitable sharing of benefits arising from the utilisation of genetic resources.
– This was one of the objectives of the Convention on Biological Diversity(an agreement signed by 150 governments since the 1992 Rio Earth Summit).
– To fulfil this need, the Convention’s Conference of the Parties put in place, in 2004, an Ad Hoc Open-ended Working Group on Access and Benefit-sharing, which negotiated the protocol for six years to finally adopt it on October 29, 2010, at Nagoya, Japan.

– To set a legally binding international framework to promote a transparent and effective implementation of “access and benefit-sharing (ABS)”at the regional, national and local levels.
– The protocol is based on potential users of genetic resources obtaining the prior informed consent (PIC) of the community with whom the genetic resource is located before accessing the resource, and negotiating and agreeing on the terms and conditions of access and use of this resource through the establishment of mutually agreed terms (MAT).
– Each Party to the Nagoya Protocol provides information on domestic ABS requirements, national focal points and competent national authorities, as well as makes available permits or their equivalent issued at the time of access.

India has Union, state and village-level institutions to conserve biodiversity and to share its earnings with communities