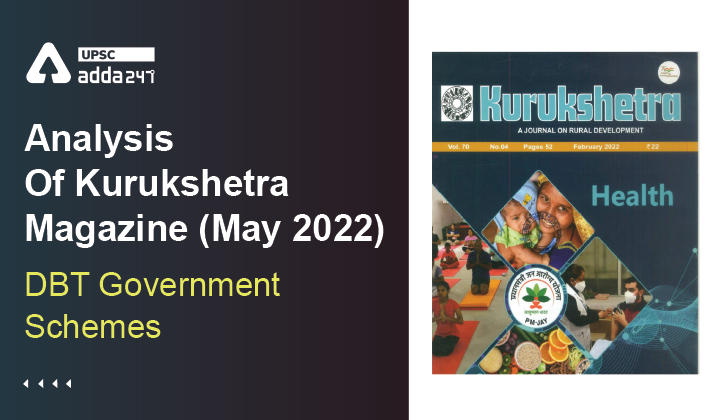 – Direct Benefits Transfer programme aims to bring transparency through transfer of subsidies directly to the beneficiaries through their bank accounts.
– At present, 313 Central sector (CS) and Centrally sponsored schemes (CSS) from 53 Ministries have been on boarded on the DBT Bharat Portal.

– Direct Benefit Transfer (DBT) is Government’s major reform initiative to re- engineer the existing delivery processes, ensuring better and timely delivery of benefits using Information & Communication Technology (ICT) by transferring benefits into the bank/postal accounts, preferably Aadhaar seeded, of accurately targeted beneficiaries, as well as in-kind transfers from Government to individual beneficiaries.
– Direct Benefit Transfer (DBT) was started on 1st January, 2013 with the aim of reforming Government delivery system in welfare schemes for simpler and faster flow of information/funds and reduction of fraud.

– The Pradhan Mantri Kisan Samman Nidhi (PM- KISAN) Scheme is a Central Sector Direct Benefit Transfer (DBT) Scheme, under which, financial assistance of Rs.6000/- per annum is provided to all landholding farmer families across the country, subject to certain exclusion criteria relating to higher income strata, to enable them to take care of expenses related to agriculture and allied activities as well as domestic needs.
– The amount is transferred in three four-monthly instalments of Rs. 2000/- each, directly into the bank accounts of the beneficiary farmers identified by the State/UT Governments.
– Payment is done on the basis of Aadhaar seeded data of beneficiaries.
– The Scheme was formally launched on 24 February, 2019 by the Prime Minister Shri Narendra Modi at a grand function at Gorakhpur, Uttar Pradesh.

– MGNREGS is a demand driven wage employment programme which provides for the enhancement of livelihood security of the households in rural areas of the country by providing at least one hundred days of guaranteed wage employment in every financial year to every household whose adult members volunteer to do unskilled manual work.
– In order to streamline the system of fund flow and to ensure timely payment of wages, electronic Fund Management System (eFMS) was implemented in 2016.
– Through this, payment of wages is being credited directly to the bank/post office accounts of Mahatma Gandhi NREGS beneficiaries by the Central Government through Direct Benefit Transfer (DBT).

– Pradhan Mantri Matru Vandana Yojana (PMMVY) Scheme enables beneficiaries to receive the scheme benefits through Direct Benefit Transfer (DBT) in furtherance of the objectives of encouraging improved health seeking behavior among Pregnant Women and Lactating Mothers.
– The Maternity Benefit Programme has been implemented in all the districts of the country in accordance with the provision of the National Food Security Act, 2013.

– The PMAY-G aims at providing 2.95 crore houses to the eligible rural population in the country so as to achieve the objective of “Housing for All”.

– “Pratyaksh Hanstantrit Labh” – PAHAL Scheme was initially rolled out in 291 districts in the country starting from 1 June, 2013 in six phases.
– The government had comprehensively reviewed the scheme and after examining the difficulties faced by the consumer substantively modified the scheme prior to launch.
– The modified scheme had been re-launched in 54 districts on 15.11.2014