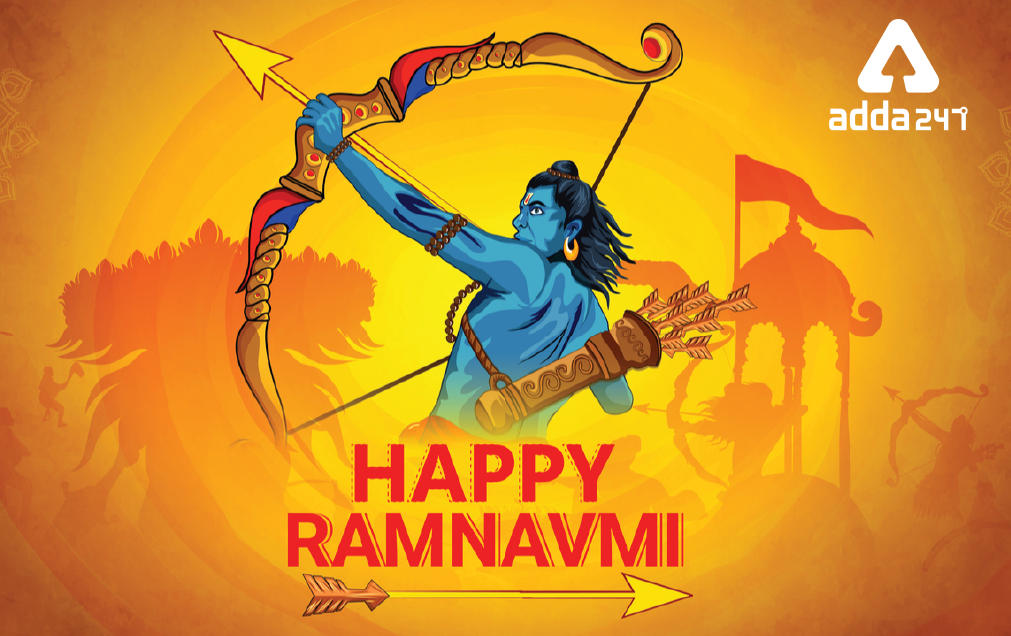 Adda247 wishes you a prosperous and blessed Ram Navami!

On the auspicious day of Ram Navami, Adda247 wishes all our readers a very Happy Ram Navami. Finally, the Chaitra Navratri is coming to its climax. People have been celebrating Navratri and performing pujas and various rituals since 2nd April 2022. Ram Navami is celebrated on the Ninth and final day of the Chaitra Navratri to commemorate the birth anniversary of the Lord Ram. This year Rama Navami is being celebrated on 10th April 2022.

According to Hindu Mythology, Lord Ram is the Seventh Avatar of Lord Vishnu. He was born to Queen Kaushalya and King Dashrath as their eldest son in the Treta Yug in Ayodhya. One of the greatest epics, Ramayana, is dedicated to glorious Legend of Lord Ram. He is considered as the epitome of righteousness and the greatest kings of all times. He is the symbol of everything good, pure and virtuous. Lord Ram was able to put an end to the tyranny and evils of King Ravan by coming out victorious against him.

Lord Ram is the symbol of strength, goodness, and ethics. On Ram Navami, people seek blessing from Lord Ram to remove all the negative energy around them and guidance to always take the path of goodness and Dharma.

People start their day by offering prayers to the Sun, as it is believed that Lord Ram was a descendant of Sun. Rest of the day, they observe a fast, follow rituals, sing devotional songs and recite Ramayana or other religious scriptures. In some parts of India, Ram Navami processions are organized where images of Lord Ram, Sita ji and Laxman along with Lord Hanuman is placed on a chariot for the devotees.

Adda247 wishes that our readers find the path of righteousness and virtue on the pious day of Ram Navami. We hope Lord Ram guide you to take all the right decision in life. He bestows upon you the strength to devote your energy and focus on your goals and convert them into your achievements. Happy Ram Navami!