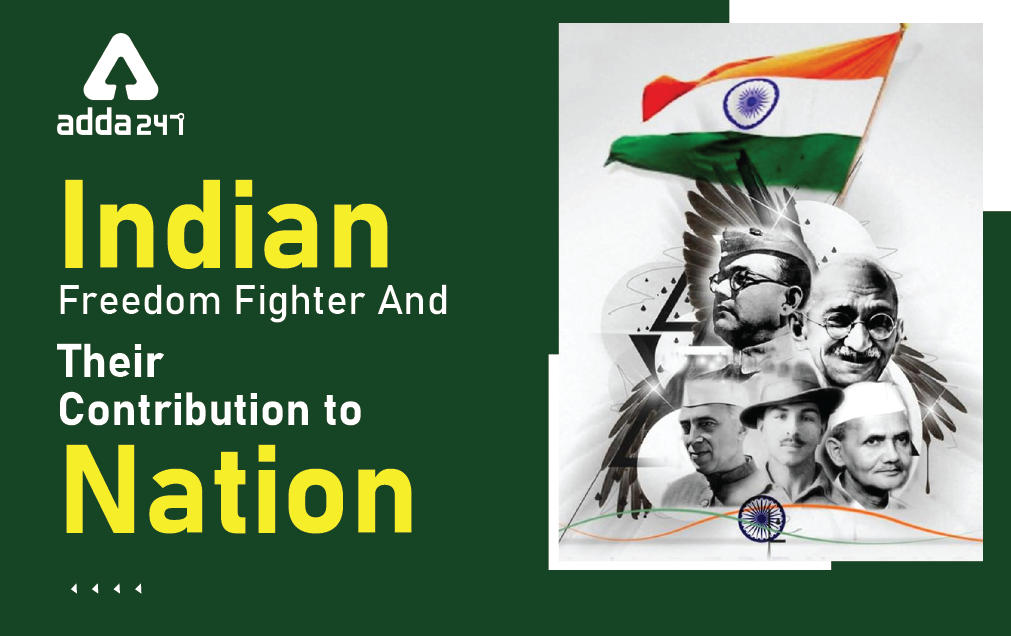 India’s Freedom Struggle was an amalgamation of numerous regional and national movements and struggles. India attained independence on 15th August 1947 after almost a century-long freedom struggle. The freedom struggle of India on a massive level can be traced back to the Revolt of 1857.

Here is the list of Indian Independence Activists along with their contributions to the Indian Freedom Movement. The candidates preparing for the teaching competitive exams will find this article informative.

One of the most senior and prominent Congress Leader and Freedom Fighter, Sardar Vallabhbhai Patel was the First Minister of Home Affairs of India. He was an ardent supporter of Gandhi and his philosophy. He was instrumental in organizing the peasant movement in Gujarat against the Britishers with the principles of non-violence. After India’s independence, as the Minister of Home Affairs, he weaved 562 Princely States into India, consolidating its integration into a unified nation.

His statesmanship, integrity and impartiality personality led the Princely States to accept to accede to India and become its integral part. His contribution to the Indian Freedom Movement and laying the foundation of India as a unified nation is immense and eventually earned him the nickname of Iron Man of India.

Born on 23rd January 1897, Subhash Chandra Bose was one of the most prominent figures of the Freedom Movement in India. He is considered one of the greatest and fiercest freedom fighters in the history of the Indian Freedom Struggle. He was known for his extremist views and approach to attaining Freedom. This was the reason for his fall out with Mahatma Gandhi in 1930 when he left Congress. He was a dynamic and radical youth wing leader of Congress however, he disagreed with various policies and views of Gandhi. Thus, he later founded Forward Bloc to promote his ideals of freedom. Later, he escaped to Germany and with the help of Japan, he raised in own army, called Azad Hind Fauj (Indian National Army) to fight against the Imperialist British Army from North-East India. He was able to free a large portion of Manipur from the Britishers, however, was defeated due to the Japanese surrender after the Hiroshima and Nagasaki Atom Bomb attacks. He was announced to be dead on 18th August 1945 in a plane crash, however, his death has been the biggest mystery in the world to date.

Mohandas Karamchand Gandhi, also known as Mahatma Gandhi was an eminent figure in the struggle for the freedom of India. He had inspired people across the country to join the freedom movement. He believed and preached that independence should be attained through non-violence. Thus, he started movements like Non-Cooperation Movement, Dandi March, and Quit India Movement.

He was born in Porbandar on 2nd October 1869. After becoming a lawyer, he went to South Africa to work in 1893. However, the discrimination toward the non-white people in South Africa led him to fight for equality. He came back to India in 1914 and continued his fight against the imperialist and oppressive British Rule in India.

One of the most profound and prolific Freedom Fighters of India, Lal Bahadur Shashtri was born on 2nd October 1904. He was born Lal Bahadur Srivastav, however, in later years he dropped his caste title while working for the upliftment of the backward classes in Uttar Pradesh. As a teenager, he dropped out of school to join the Non-Cooperation Movement. Later he completed his graduation from Kashi Vidyapeeth with a first-class degree. Eventually, he proactively participated in various movements like Quit India Movement, Civil Disobedience Movement and other satyagraha. After independence, he became the 2nd Prime Minister of India and led India through the India-Pakistan War of 1965.

Bhagat Singh was one of the most dynamic and revolutionary young men who fought for India’s Freedom until his death. He was born in 1907 in Banga in undivided Punjab (Now in Pakistan) in a Sikh family. Patriotism and the zeal to fight for the motherland came to Bhagat Singh in inheritance. He actively participated in the Non-Cooperation Movement led by Mahatma Gandhi in his teens. After the death of Lala Lajpat Rai, he took it upon himself to avenge his death caused due to lathi-charge ordered by James A Scott.

He with his associates planned the murder of James A Scott, however, in case of mistaken identity, they killed John Saunders in December 1928. Later, On 8th April 1929, Bhagat Singh and Batukeshwar Dutta threw bombs in the Central Legislative Assembly in Delhi to protest against the Public Safety Bill and the Trade Disputes Bill. They were arrested, convicted and sentenced to death for the bomb case and murder case. Bhagat Singh, Shivaram Rajguru and Sukhdev Thapar were hanged on 23rd March 1931. Bhagat Singh became immensely popular after his death as he emerged as the symbol of revolution. He was the spark that ignited a fire in the hearts of Indians and propelled the freedom movement in Northern India.

They preached to people to boycott goods and shops of the Britishers and to conduct strikes in the British Factories as a symbol of protest against the regressive and oppressive policies of the British Raj. He founded Brahmo Samaj and was a veteran leader in the Indian National Congress. He was very assertive in this approach to nationalism.

Boron in 1956, Bal Gangadhar Tilak was a prolific Nationalist and Freedom Fighter. He is known for his famous quote, “ Swaraj is my Birth Right”. He was the editor and writer of various rebellious newspapers and columns that defied the Imperialist Rule of Britisher on India. His contribution to the Indian Freedom Movement is so colossal that he was conferred Lokmanya which means accepted by the people as their Leader.

He was called the Father of Indian Unrest by the British Colonial Authorities. His writings inspired the youth to fight for the Country’s Freedom. His most famous Newspaper was ‘Kesari’ in which various he shared his staunch view against British Rule.

Check out the list of the Important Freedom Fighters who had major contributions to the Freedom Movement of India in their ways. The Freedom Struggle in India continued for years and with the consistent contribution of the freedom fighters, attaining Independence was impossible.