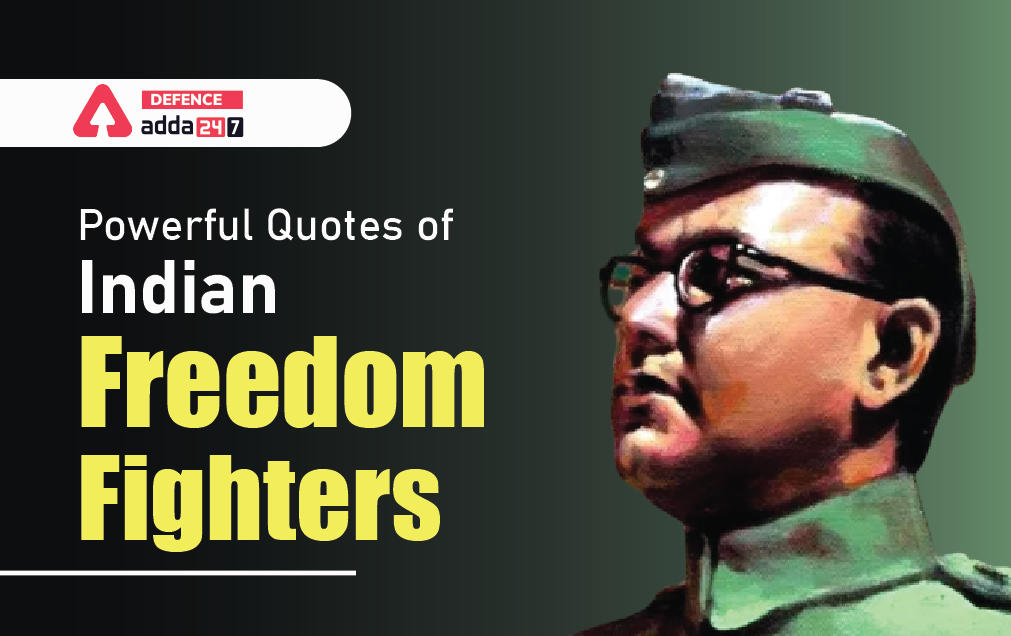 India attained its Freedom and Independence on 15th August 1947 at the stroke of midnight, this year it will be diamond jubilee i.e. 75th Anniversary for us. Independence Day is historical day for Indian as it was a result of a century-long Freedom Struggle. There were many freedom fighters who sacrificed their lives for the dream of a Free India and their freedom. Some of the praised freedom fighters among them are Bhagat Singh, Subhash Chandra Bose, Mangal Pandey and many more.

Our freedom fighters fought fiercely to gain independence. They took up several fight in order to unite the masses against the oppression of British Rule. One of the most effective ways used by them was their slogans that filled the common masses with the feeling of patriotism.

Slogans are a powerful measure to inspire the masses and bring about a revolution. India has a long history of powerful slogans given in different times by various influential and popular Freedom Fighters. These Slogans were effectively used by our freedom fighters during India’s struggle for independence. Each slogan has a meaning that exerts significant influence on the masses. The top 10 of the most impactful slogans include:

Freedom Fighters and Their Contribution

This slogan was given by Netaji Subhash Chandra bose. He also gave the very famous slogans Dilli Chalo and Jai Hind. He formed the Azad Hind Fauj. He gave this slogan to instil confidence among the masses to fight against British oppression while he raised the Azad Hind Fauz and entered India through the Myanmar side.

Originally this slogan was coined by Maulana Hasrat Mohanib but was later used and popularized by Bhagat Singh. The meaning of Inquilab zindabad is “Long live Revolution”. This slogan filled the youth with patriotism who were ready to lay their lives for the motherland.

Mohandas Karamchand Gandhi or Mahatma Gandhi as he is popularly known as, gave this slogan. This slogan culminated in the last nail in the coffin of British rule. Along with this he also participated in and organised various movements against the British like Kheda Movement, Champaran Movement, Khilafat Movement, Non-Cooperation Movement and Quit India Movement.

The origin of the phrase Satyamev Jayate or Truth only Triumphs lies in Mundaka Upanishad. Pandit Madan Mohan Malviya who was also given the title of Mahanama used this slogan in his presidential address in 1918. This reached the Masses and impacted them significantly.

Muhammad Iqbal wrote Saare Jahan Se Accha titled Tarana-e-hind in 1904. It is considered one of the most patriotic songs and it became an anthem against British rule. However, after the partition, he was regarded as the Spiritual Father of Pakistan.

This slogan was given by Jawahar Lal Nehru who was the first Prime Minister of Independent India. He was of the view that laziness can harm oneself.

This slogan was used by Bal Gangadhar Tilak. This instilled the importance of “Swaraj” in people and also made them aware of their rights along with Provoking their love for the country.

This slogan was given by Lal Bahadur Shastri in 1965. At that time India was Attacked by Pakistan and at the same time, there was a scarcity of food grains. To instil confidence in both farmers as well as soldiers he gave this slogan.

Lala Lajpat Rai, who was part of the Lal-Bal-Pal trio, used this slogan when the British government decided to send Simon Commission to discuss constitutional reforms in 1928. This commission was opposed as there were no Indian members on the panel. Lala Lajpat Rai died during the lathicharge of the British during this struggle.

This slogan was raised during the Quit India Movement by Mahatma Gandhi. The Bharat Chhodo Andolan or Quit India Movement was launched and led by Gandhiji in 1942 to end British rule. He gave a famous speech in Mumbai where he gave A do or die call to the people to finally end the British Rule.

Freedom Fighters And Their Famous Slogans

Freedom fighters and their slogans in English-

Freedom fighters and their slogans in Hindi-

Below are the slogans of freedom fighters that they gave in Hindi.

These slogans motivated the people and gave them the confidence to stand up against the British to fulfil the dream of “Swaraj” or Independent India.  These slogans were effective non-violent measures that significantly contributed to the whole long journey of achieving independence and instilled faith in the masses during the “trough” phases of the struggle.

A: Mahatma Gandhi gave the slogan “Do or Die”.

A: Maulana Hasrat Mohanib was the Freedom Fighter who gave the slogan “Inquilab Zindabad”.

Q: What was the dynamic slogan given by Subhas Chandra Bose?