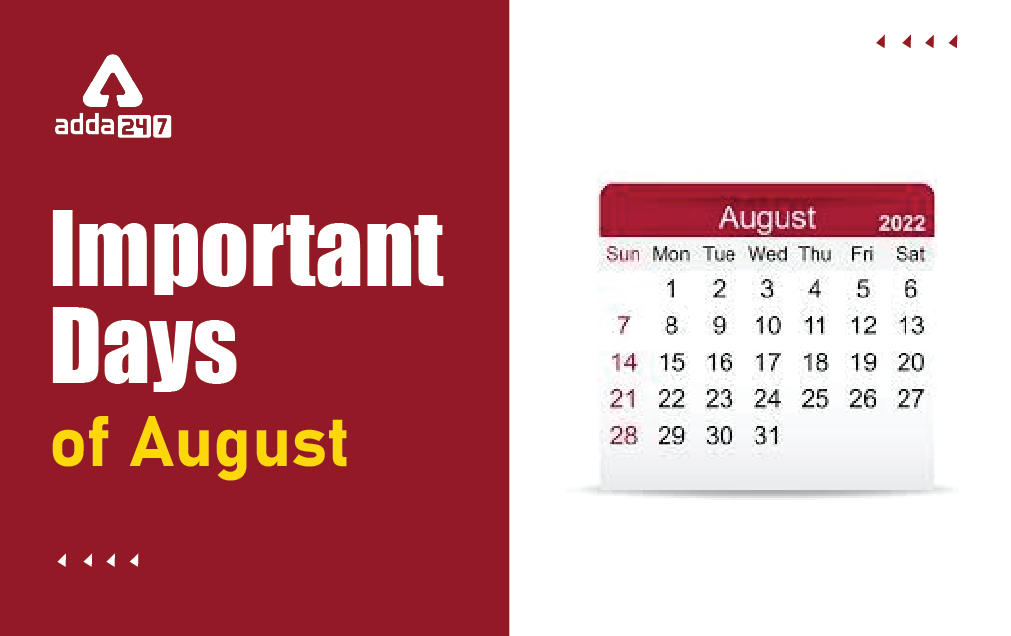 Important Days in the Years

Why Learn the Important Days in August?

The Aspiring candidates who are diligently preparing for the Teaching Competitive Exams like DSSSB, NVS, KVS, and others must study the Important Days in August. As Static GK is an integral part of these exams, at least 2-3 mark questions are always witnessed in these exams from important days and dates segments. As some of the Important Days in August have national and international significance, the candidates must be on their toes while their preparations.

August is the eighth of the year and various crucial historical events have happened in this month across the globe. From the Nuclear bombing of Hiroshima and Nagasaki to India Attaining its Independence, many significant events happened in August. Let’s find the most significant and Important Days in August.

August is the eighth of the year and various crucial historical events have happened in this month across the globe. From the Nuclear bombing of Hiroshima and Nagasaki to India Attaining its Independence, many significant events happened in August. Let’s find the most significant and Important Days in August.

This day is dedicated to the invention of the world wide web by Tim Berners-Lee that brought the whole world to our fingertips. This invention single-handedly changed the world and laid the foundation for various technologies that have significantly the lives of the modern world.

This day is commemorated to remember the people who lost their lives in Hiroshima on 6th August 1945. Today marks when the first atomic bomb was dropped on a residential city with the intent to destroy it and that’s why it is considered as one of the most August Month Important Days. America dropped the bomb on Hiroshima, Japan to weaken the Japanese regime in World War II. Peace and love are promoted on this day.

People around the world celebrate their friendship on this day. They sent gifts and flowers to their friends. Many tie friendship bands on their friend’s wrist to express their love and admiration. Every first Sunday of August is celebrated as friendship day.

9th August marks the Black Day for Japan when the second Atom Bomb was dropped on Nagasaki. The day commemorates Japanese people who lost their lives during the Bombing. People promote the message of peace and love on this day.

Raksha Bandhan is celebrated by Hindus on the last day of the Hindu Lunar Calendar. On this day, the sisters tie Raksha Bandhan on their brother’s wrist and the brothers promise to protect their sisters for life. This festival promotes love and mutual respect between brothers and sisters and thus, this day is very special for them.

India attained Independence on 15th August 1947 from the atrocious and barbaric British rule after almost 200 years of oppression. This day marks a new beginning for the rise and growth of India and therefore, it is a very Important Day in August in India. It is celebrated with much fervour and patriotic emotions by the Indians. Every year, Indian National Flag is hoisted in government offices, buildings, schools and many other privates and public places.

26th August 1920 marks a very significant in the history of America when the proclamation was signed which stated that the women in America can cast their vote in the electoral voting. In 1971, this day was announced as Women Equality Day to commemorate the significate event. This day is celebrated to promote and support women’s equality.

Q: When is Independence Day celebrated in India?

A: Independence Day in India is celebrated on 15th August.

Q: When is National Sports Day celebrated in August?

A: National Sports Day is celebrated on 29th August.

Q: When are Hiroshima and Nagasaki Days observed in August?

Q: When is World Photography Day celebrated in August?

A: Every Year World Photography Day is celebrated on the 19th of August.

Q: When will be Friendship day celebrated?

A: Friendship day celebrated on the 1st Sunday of August Month

Q: When will be the Janmashtami festival celebrated?

A: Janmashtami festival is Celebrated on 18th August 2022.

Q: When is the National Sports Day or Rashtriya Khel Divas celebrated?

A: The National Sports Day or Rashtriya Khel Divas is celebrated on 29th August.

Q: When will India be celebrating National Handloom Day?

A: India will be celebrating National Handloom Day on 7th August 2022.