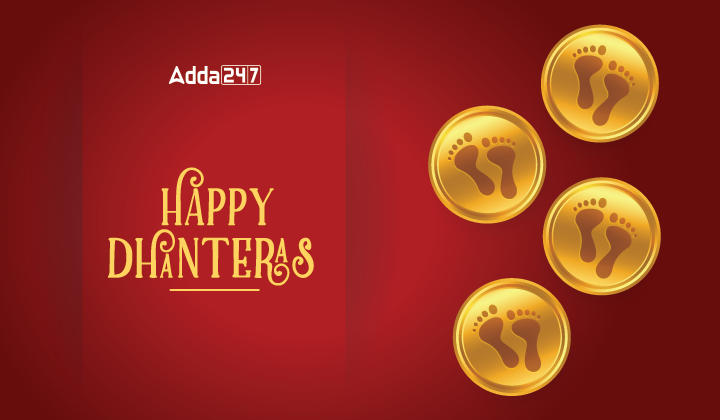 On the auspicious day of Dhanteras, Adda247 wishes all our precious readers a very happy and prosperous Dhanteras.

The Dhanteras puja is known by many names such as Dhanwantari Triodasi, Dhanvantri Jayanti Puja, Yamadeep and Dhantrayodashi. Usually, Dhanteras commences the festivities and celebrations of Diwali as well. It is usually around the tie of Dhanteras when the entire country is lit up and eagerly welcomes Diwali.

Dhanteras means the puja of wealth and it is celebrated on the 13th day (in the Krishna paksha, dark fortnight) of the month of Ashwin according to the Hindu lunar calendar. In most houses, Goddess Laxmi is worshipped on this day. Traditionally, it is a custom to buy something on Dhanteras. People usually buy gold or silver, although some people buy other items as well. It is believed to be very auspicious to buy something on Dhanteras as it will bring good luck and prosperity to the house.

As the legend goes, on Dhanteras, a wife was able to save her husband from the God of Death Yama. According to the legend, it was predicted that King Hima’s son would on the fourth day of marriage due to a snake bit. His clever wife devised a plan to save her husband. She blocked the door with a heap of gold and silver jewellery and coins and lit their room with bright lights. Moreover, she didn’t allow her husband to sleep rather she narrated stories and chanted songs all night long. When the Death God Yama tried to enter the room by climbing on top of the heap of coins and jewellery as he couldn’t find any other way. However, he was mesmerized by the voice of Hima’s daughter-in-law and immersed in her stories and songs of her. As the dawn broke out, Yama left the room without taking the husband sparing his life.

Another legend behind celebrating Diwali, the ocean was churned by Gods and demons to get Amrita or nectar. Dhanvantari (known as a physician of Gods and an embodiment of Lord Vishnu) had emerged (having the jar of elixir) from the ocean churning. The same day is celebrated as the Dhanteras.

On the auspicious day of Dhanteras, many people embrace new activities and journeys in life to fetch positive results by seeking the blessings of God. Adda247 wishes a very prosperous Dhanteras. We wish all your dreams come true as a result of your hard work and dedication.