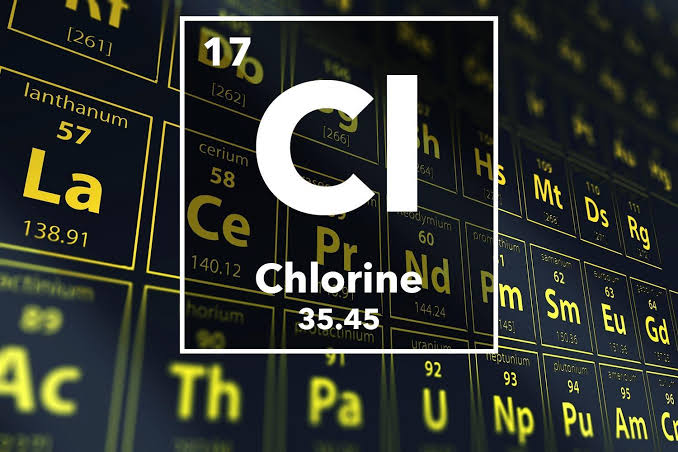 Chorine is a yellowy-green dense gas with a choking smell, which was discovered by Carl Wilhelm Scheele in 1774. Chlorine is a chemical element with the symbol Cl and atomic number 17. The atomic mass of Chlorine is 35.5 u. The second-lightest of the halogens, it appears between fluorine and bromine in the periodic table and its properties are mostly intermediate between them.

Because of the presence of isotopes, the atomic mass of chlorine is considered as 35.5u rather than 35u. Isotopes are elemental varieties that have the same number of protons but differ in the number of neutrons in the atom. A chlorine atom has 17 protons and is divided into two isotopes: chlorine 35 and chlorine 37.

The sum of the masses of protons, neutrons, and electrons in an atom or group of atoms is called atomic mass. The average mass of the naturally occurring isotopes of an element in comparison to the mass of an atom of 12C is known as relative atomic mass. As a result, the atomic mass of chlorine is determined to be 35.5u.
Read More:

Chlorine Atomic Mass and Weight in Kg and Grams

Following are the uses of Chorine:

Chlorine is not found in nature uncombined. The principal mineral that is mined for chlorine is halite (sodium chloride or ‘common salt’). Sodium chloride is a highly soluble salt that has leached into the waters throughout the Earth’s history. Where ancient oceans have evaporated, there are several salt beds, or ‘lakes,’ that can be mined for chloride.Carnallite (magnesium potassium chloride) and sylvite are two minerals that contain chlorine (potassium chloride). The electrolysis of brine produces 40 million tonnes of chlorine gas per year (sodium chloride solution). This technique also yields sodium hydroxide, which is useful.

Alchemists were aware of hydrochloric acid (HCl). Carl Wilhelm Scheele of Uppsala, Sweden, created the gaseous element in 1774 by heating hydrochloric acid with the mineral pyrolusite, which is naturally occurring manganese dioxide, MnO2. A dense, greenish-yellow gas was produced, which had a suffocating odour and dissolved in water to produce an acid solution, which he recorded. It bleached litmus paper and discoloured plants and flowers, he said.In 1807, Humphry Davy researched it and came to the conclusion that it was not simply a simple substance, but that it was also an element. Even though he stated this in 1810, it took another ten years for some scientists to acknowledge chlorine as an element.

Q. What is the atomic mass of chlorine-35?

Q. How do you find isotopic mass?

Ans. Chlorine has a relative atomic mass of 35.5 rather than a whole number. This is due to the fact that chlorine has two isotopes: chlorine-35 and chlorine-37. The mass numbers and abundances of copper isotopes in a naturally occurring sample are shown in the table.

Q. What is the mass of 2 moles of chlorine gas?