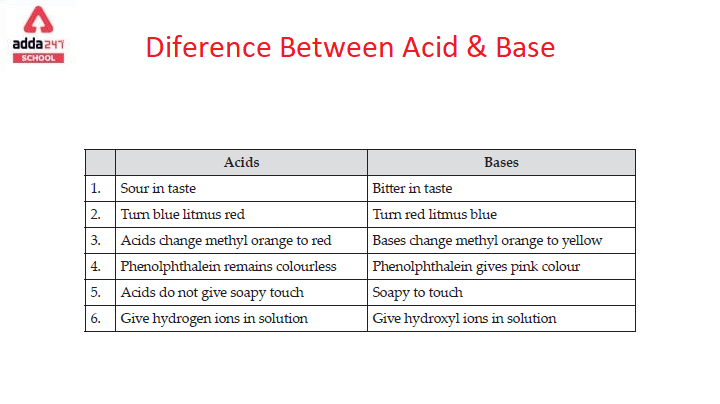 Difference Between Acid and Base

Acid and base are the basics of chemistry that we learn in lower grades. Acid and base form the pillars of chemistry. Acids are in the form of lactic or citrus acid which is mostly present in citrus fruits like lemon or orange. Bases are in powder form mostly like bleaching powder, ammonia, etc. The acid base helps in differentiating several compounds in chemistry.

State Difference Between Acid and Bases

There are several different definitions of acids according to many scientists. According to Arrhenius, any substance when dissolved in water increases the concentration of hydrogen ions or H+ ions are acid.

Bronsted-Lowry defined Acid as a proton donor. This means when a compound donates the proton easily and as soon as possible, it is considered a strong acid.

Another definition is given by Lewis, that is, the compound that accepts a pair of electrons. That means any compound that is electron deficient can act as an acid.

Similar to acid, these three scientists have a different definition for the base too.

According to Arrhenius, any substance, when dissolved in water increases the concentration of OH– ions are base.

The Bronsted-Lowry base theory states that any substances that accept a proton are base. The faster it accepts a proton the stronger the basicity.

Lewis’s definition of base is that any substance that accepts a pair of the electron is base.

What is the difference between acid and base?

Acids and bases have different properties with different chemical formulas. These are the basics of chemistry that help a lot throughout your journey in chemistry. Here we summed up the definition and differences between acid and base.
Related Articles:

FAQ’s on Difference Between Acid and Base