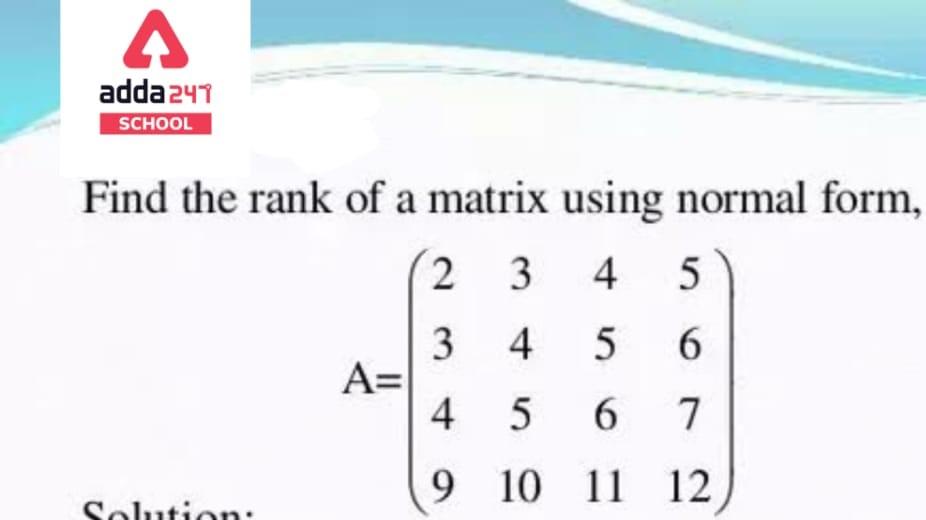 Rank of the Matrix

The rank of a matrix A is the dimension of the vector space formed (or spanned) by its columns in linear algebra. This is the maximum number of linearly independent columns in column A. This is the same as the dimension of the vector space traversed by its rows. As a result, rank is a measure of the system of linear equations and linear transformation encoded by A’s “nondegeneness.” There are several definitions of rank that are interchangeable. One of the most fundamental aspects of a matrix is its rank.

The rank is often expressed as rank(A) or rk(A); in some cases, such as rank A, the parentheses are omitted.

The Rank of a Matrix: Definition

Nullity of a Matrix: The number of vectors in a matrix’s null space is defined as its nullity. In other words, the nullity of A can be defined as the dimension of the null space of matrix A. The total number of columns in matrix A is Rank + Nullity.

Steps to Find the Rank of the Matrix by Minor Method:

(ii) The identity matrix In has a rank of n.

(iii) If matrix A’s rank is r, there must be at least one minor of order r that does not vanish. Every minor of order (r + 1) and higher-order (if any) of matrix A vanishes.

Steps to Find the Rank of the Matrix by Echelon Form:

(i) Every non-zero row’s initial element should be 1.

(ii) If every element in a row is zero, that row should be placed below the non-zero rows.

We may easily convert the provided matrix to echelon form using simple techniques.

FAQs on Rank of a Matrix

Q. What is the meaning of the Matrix?

Ans. A matrix is the environment or context in which anything develops and grows, such as a civilization. A matrix is a set of numbers, symbols, or letters arranged in rows and columns for the purpose of solving mathematical problems.

Q. What is matrix formula used for?

Ans. Matrix is a method of arranging numbers in rows and columns, as well as expressions and symbols. Matrix formulae are used to solve linear equations and other mathematical functions such as calculus, optics, quantum mechanics, and others.

Q. What is a Orthogonal Matrix?

Q. What is a Symmetric Matrix?

Q. What is a matrix sheet?

Ans. A matrix diagram is a common lean sigma tool for visualising interactions between two, three, or four groupings of data. The most popular types of templates to utilise as a starting point for creating your own tools from scratch — for a variety of creative reasons — are the matrix and checklist templates.