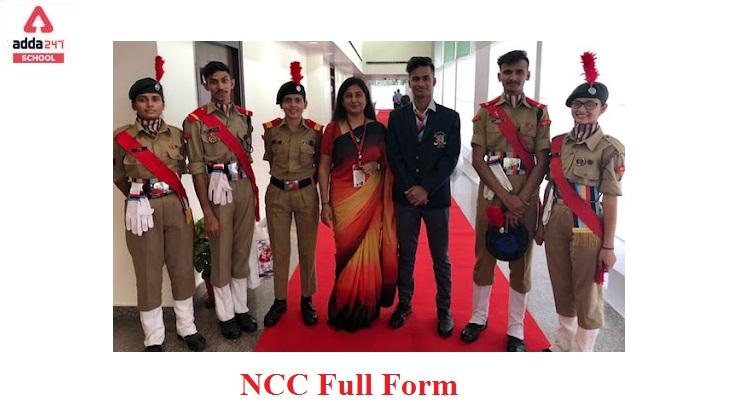 NCC Full Form: NCC, stands for The National Cadet Corps. The National Cadet Corps is the Indian Armed Forces’ young wing and is a Tri-Services Organization comprised of the Army, Navy, and Air Wing that is dedicated to training the country’s children into disciplined and patriotic citizens. The NCC has its headquarters in New Delhi. It welcomes school and college students and that is to be done voluntarily. The Indian Soldier Youth Foundation is a non-profit organisation. It recruits cadets from high schools, higher secondary schools, colleges, and universities around the country. Basic military training is provided to the Cadets during their stay at NCC. However, once the officers and cadets have completed their training, they are not obligated to serve in the military.

NCC Full Form in English and History of NCC

NCC Full form is National Cadet Crops In India, the NCC was founded in 1950. It was originally known as the ‘University Corps,’ and it was created to fill a void in the Army. The University Training Corps took over from the University Corps in 1920. The goal was to elevate the UTC’s standing. It was a crucial step in Indianizing the military. It was renamed UOTC so that the National Cadet Corps could be regarded its successor. During World War II, the UOTC never lived up to the British aspirations. As a result, it was suggested that new systems be devised to better train more young males. A committee advised that a national cadet organisation be founded in schools and colleges. The Governor-General approved the Soldier Youth Foundation Act. The Soldier Youth Foundation was established in July 1950.
The Girls Division was created in 1949. The Air Wing was created in 1950, while the Naval Wing was added in 1952. The NCC curriculum was expanded in the same year to incorporate community service activities as part of the NCC curriculum. Following the Sino-Indian War in 1962, NCC training became mandatory in 1963. Furthermore, the Corps was deemed voluntary once more in 1968.

NCC cadets served as the second line of defence throughout the 1965 and 1971 wars. The NCC set up camps to help ordnance factories supply weaponry and ammunition to the front lines. NCC patrol parties were utilised to catch enemy paratroopers.
The NCC cadets also collaborated with civil defence officials. They were also actively participating in rescue and traffic control operations.
The NCC syllabus was updated after the year 1971. The redesigned NCC curriculum placed a stronger emphasis on developing leadership and officer-like traits. The amount of military training received by NCC cadets was also lowered. Social service and youth management were given a higher priority.

Army NCC Full Form, Meaning, and Motto of NCC in School and College

When was the National Cadet Corps established?

Is the NCC Program a part of the educational programme or a component of the military programme?

It’s an element of the educational process.

What are the objectives of the NCC in School?

To instil in the country’s youth character, commandership, discipline, leadership, a secular worldview, a spirit of adventure, and the virtues of selfless service.

What is the NCC motto?

NCC’s motto is ” UNITY AND DISCIPLINE.”

What does the NCC insignia stand for?

The NCC Crest features gold in the middle with the letters “NCC”. it is surrounded by a wreath of 17 lotuses with a red, blue, and light blue background.