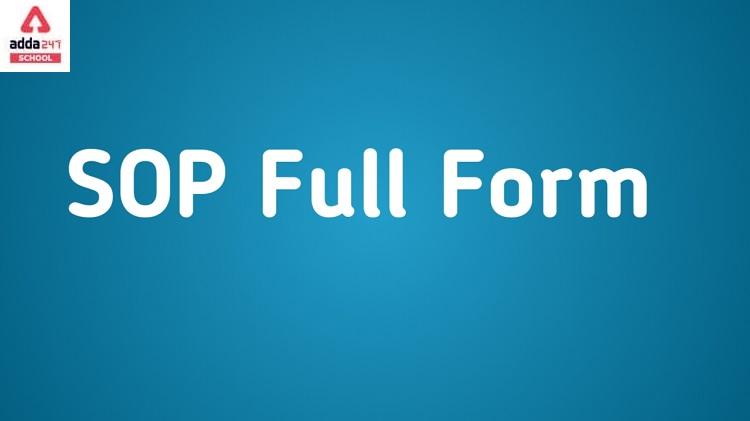 SOP full form is Standard Operating procedures are the set of fixed steps that are to be followed while completing the assigned task in an organization. In Sop full form any document that guides on something stating the ‘how to’ clause is the sop document.

It is the blueprint of the ground-level plan of a company and the employees. It contains all the essential procedures which are to be strictly abided by. SOP’s are important guidelines that are periodically released by the government. This takes care that all the citizens are informed about the updates through official documents of the SOP’s.

There were a number of SOP’s that were released by the government of India during the covid situation. The SOP’s had the information, that were to be followed by the citizens for smooth functioning of the country during the tough times.

Not following the SOP’s released by the government can have serious implications. This is a written document which is to be treated like a law. Any person who doesn’t follow the rules given in the SOP are liable to be treated as law and order.

The SOP’s released by the government of India during the pandemic had certain freedom of movement for the people working in emergency wards, services. The SOP’s are decided after conducting serious meetings with the heads of different departments and analyzing the complete situation of the region.

The rules have to be passed by top officials in high posts of the state. Only then can be the official SOP release take place. Once an SOP is declared it is be followed religiously until and unless there are exceptions, officially announced by the Government.

Very often people tend to ask that why do we require a sop and what is its use. Read on further to know the answers to these questions.

Some reasons on why we require a sop are

It is used during the onboarding stage of any new intern, employee by the company HR. the HR is responsible for making the new candidates understand the rules and regulations of the company which are stated in the SOP.

What is the Full form of SOP in Medical?

You can easily create a Sop full form for your company by following the steps mentioned below.

These were the few steps of creating a detailed and guided sop. You now have one ready for your company!

Few points must be checked and kept in mind while creating the sop for your company. Those are listed below.

These basic points need to be kept in mind while creating the sop.

What is a Sop?

An SOP is a procedure that describes the activities necessary to complete tasks by industry regulations, or even just your standards for running your business

What does SOP mean at work?

Sop ensures that the team is working in a well-coordinated manner and towards achieving the goals.

How do I start a sop?

Start by introducing the main goals of your company. Then set the rules you want to be followed in your company by the employees.

What are the benefits of SOP?

Some of the benefits of SOP are:

What should not be included in SOP?

Points that make the working culture weaker and exposes the companies goals and targets should not be included in Sop.