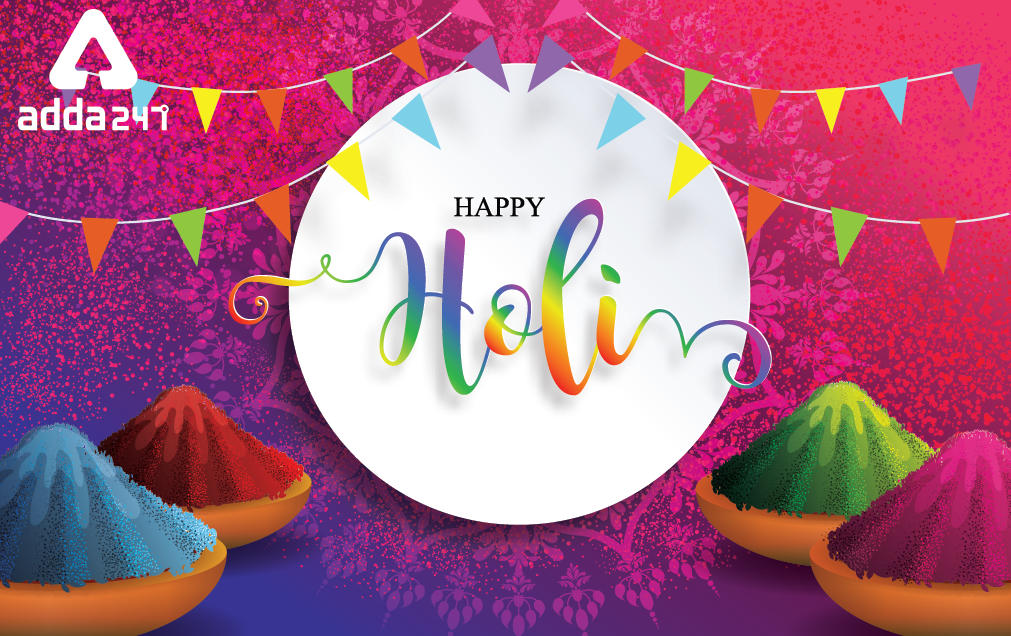 Adda247 wishes our readers the most colours, joyous and vibrant Holi!

On the special occasion of Holi, we hope that all your life is filled with more happiness, success, joviality and most importantly with colours. May all your dull moments are turned into a vibrant and dazzling time of your life. Holi is invariably the festival of colours and vibrancy.

The history of the celebration of Holi can be traced back to ancient times. It is believed that an ardent devotee of Lord Vishnu, Prahlad, was able to overcome the evils of his own family by the strength of his belief and devotion. His aunt connived to kill him by setting up a trap. His aunt, Holika was immune to fire. She convinced Prahlad to sit on a huge pile of wood with her on the pretense of praying to Lord Vishnu. Soon the pile of wood turned into a burning pyre. However, miraculously, Prahlad came out of the pyre unharmed while Holika died in the fire. This incident became symbolic of the good prevailing upon the evil and thus, celebrated with arranging bonfires across the country to commemorate such the highest act of devotion.

Holi is associated with Lord Krishna and his love, devotion, and playfulness with Radha. Young Lord Krishna would throw colours on Radha as a playful gesture but soon other young boys and girls from his village participated in the playfulness and started throwing colours at each other. In the coming years, it became a tradition for Lord Krishna to visit Barsana, Radha’s hometown on the Day of Holi to play with colours.

Holi is celebrated in different parts of India with a different flavour attached to it. Like in Barsana, Lath Mar Holi is celebrated, where all boys dress like Lord Krishna and All girls like Radha. The girls playful beat the boys with lath and the boy tried to dodge the blow with a shield. In Vrindavan, Rasleela of Lord Krishan and Radha plays a pivotal role. Mathura has a vibrant way of celebrating Holi in its own way. In West Bengal, “Dolyatra” is arranged with splendid grandeur. In Shantiniketan, “Basant Utsav” is celebrated, which a more elegant and cultural opulence. In South India, people worship God Kamadeva on Holi. In Uttarakhand, Kumaoni Holi is celebrated by singing classical ragas.

The flavour of the Holi celebration significantly changes in every part of the country. However, the essence remains of Holi celebrations remains to celebrate the love of Lord Krishna and Radha in various forms and styles. On the day of Holi people essentially celebrate it by applying or throwing colours on each other. Some of the most famous and widely available delicacies associated with Holi celebrations are gujjia, malpua, thadai, puran poli and so on.

We hope this Holi brings in a lot of colour, happiness and sweetness in your life. We wish that everything from here on marks a new beginning for you. As we all know there are many teaching recruitments expected to be released soon. We hope you are achieve all your goals and aims in the upcoming recruitment season.