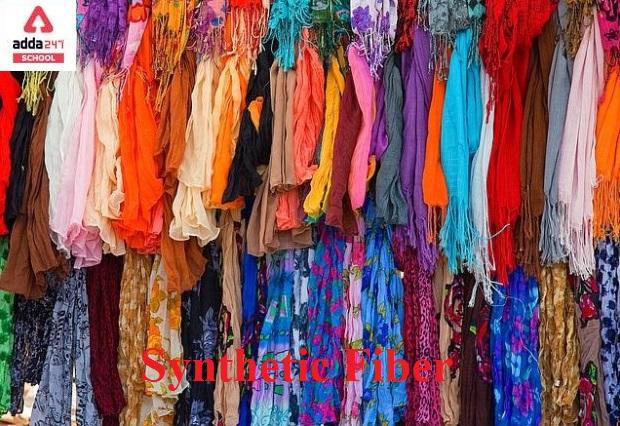 Name some Synthetic Fibres in English

What is Synthetic fibre? the answer is available here. Synthetic fibres, as opposed to natural fibres that are generated directly from living organisms, are fibres created by humans by chemical synthesis.

They’re the result of years of research by experts to improve on natural fibres, obtained from animals and plants. Synthetic fibres are made by extruding fibre-forming ingredients via spinnerets and generating a ‘different’ fibre in the process.

Polymerization, which includes joining monomers to form a long chain or polymer, is used to generate synthetic fibres. Polymer is derived from the Greek prefix “poly,” which means “many,” and the suffix “mer,” which means “single unit.”
Also Read About Nylon fibers

What is Synthetic fibre?- In Hindi

What are the advantages of Synthetic Fibre?

The glass was the first entirely synthetic fibre. Joseph Swan produced one of the first artificial fibres, which we now refer to as semisynthetic. His fibre was derived from a cellulose liquid created by chemically altering tree bark fibre. The synthetic fibre created through this process was chemically comparable to the carbon filament Swan had developed for his incandescent light bulb in terms of prospective applications, but Swan quickly understood the fibre’s potential to revolutionise textile manufacture.

Hilaire de Chardonnet, a French engineer and manufacturer, took the next step by inventing the first artificial silk, which he dubbed “Chardonnet silk.” In the late 1870s, Chardonnet was collaborating with Louis Pasteur on a cure for the French silkworm epidemic. Chardonnet discovered nitrocellulose as a viable replacement for actual silk after failing to clean up a spill in the darkroom. Chardonnet saw the importance of such a discovery and began developing his new product. However, the material used by Chardonnet was exceedingly combustible, thus it was eventually replaced with a more stable material.

In 1894, English scientist Charles Frederick Cross and his partners Edward John Bevan and Clayton Beadle devised the first successful technique of synthetic fibre. The fibre was given the term “viscose” by the researchers. Courtaulds, a business based in the United Kingdom, manufactured the first commercial viscose rayon in 1905. Later, the term “rayon” was coined to replace “viscose,” the viscous organic liquid used in both rayon and cellophane manufacturing.

In the 1930s, Wallace Carothers, an American researcher at the chemical business DuPont, produced nylon, the first synthetic fabric in the “completely synthetic” sense of the term. It was quickly used as a silk substitute in the United States.

The International General Electric business invented the first polyester fibre in Britain in 1928. It was also created in 1941 by British scientists John Rex Whinfield and James Tennant Dickson of the Calico Printers’ Association. They developed and patented Terylene, popularly known as Dacron, one of the earliest polyester fibres that were equivalent to or better than nylon in hardness and tenacity.

FAQs on Name some Synthetic Fibres

What is the definition of synthetic fibre?

Synthetic fibres, are not generated directly from living organisms, instead these are fibres created by humans by chemical synthesis.

Nylon is the first ever fibre that is fully synthetic.

What are some of the drawbacks of synthetic fibre?

Name the most common synthetic fibre.

Polyester is the most common synthetic fibre.

Which natural fibre is the strongest?

Silk is the strongest natural fibre.