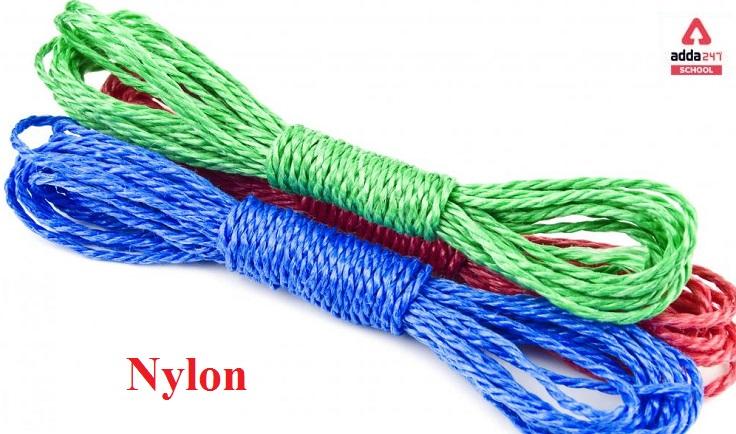 What is Nylon? Nylon is the general name for a group of polyamide-based synthetic polymers. Nylon is a silk-like thermoplastic that may be melt-processed into fibres, films, or forms. It is often manufactured from petroleum. Nylon polymers have a wide range of commercial uses, including fabric and fibres, moulded parts for automobiles and electrical equipment, and films.

What is Nylon used for Examples?

Éleuthère Irénée du Pont founded DuPont, which first made gunpowder and then cellulose-based paints, DuPont began producing synthetic ammonia and other compounds after WWI. After that,  DuPont started exploring various cellulose-based textiles and finally developed rayon, a synthetic material. The expertise DuPont gained with rayon paved the framework for the growth and marketing of nylon.

From the start of DuPont’s polymer research programme in 1927 until its announcement in 1938, the discovery of nylon spanned eleven years.

The nylon project at DuPont highlighted the value of chemical engineering in industry, contributed to create jobs, and advanced chemical engineering processes. It built a chemical plant that employed 1800 people and utilised cutting-edge technology, which is still used as a model for chemical plants today. On December 15, 1939, the first nylon mill opened in Seaford, Delaware, and began commercial production.

Nylon 6, also known as polycaprolactam, is a polymer created to mimic the qualities of nylon 6,6 without infringing on its patent. It’s a polyamide that’s semicrystalline. Unlike most other nylons, nylon 6 is generated via ring-opening polymerization rather than condensation polymerization, making it a unique instance in the comparison of condensation and addition polymers. Its competition with nylon 6,6 and the precedent it established influenced the synthetic fibre industry’s economics. Perlon, Dederon, Capron, Ultramid, Akulon, Kapron, and Durethan are just a few of the brand names.

Nylon 510 has superior characteristics, However, it is more expensive to produce.

In which cases nylon is used ?

Nylon is a low-cost, long-lasting material that is used to make plastic machine parts. Its non-conductivity and heat resistance make it popular in the electronics industry. Screws, bolts, washers, and nuts, as well as circuit board hardware, are all made with it. Because of its low coefficient of friction, nylon parts are frequently utilised in rotating or sliding devices. Because of its exceptional abrasion resistance, it is utilised to create bearings for the appliance industry.

Cookwares are made of nylon, which has a reasonably high continuous service temperature. Spatulas, slotted spoons, turners, forks, tongs, brushes, and other tools fall into this category.

Today, nylon is the most widely used textile fibre, and one of the strongest and most widely used fabrics available. It can be dyed easily, allowing for a wide range of colour combinations in textiles. It is well-known for its ability to drape and is widely used in clothing. Book bags, backpacks, flak jackets, wedding gowns and bridal veils, sports shoes, ponchos, umbrellas, camera cases, swimwear, socks, gloves, headgear, luggage, and much more are all made of nylon fabric.

The utilisation of nylon fibres does not end with the cloth. Nylon fibres are also used to make harness straps and suspension lines, as well as tents, sleeping bags, sails, rope, tennis strings, fishing poles and lines, and other items.

What is the composition of nylon?

Nylon is a form of plastic that is made from crude oil.

How was ‘Nylon’, the word coined?

One theory is that the word “nylon” derived from the words “New York” and “London,” and that two chemists came up with it while flying from one city to the other.

Nylon is a non-toxic petroleum-based substance. Because of its versatility, it has been dubbed “the most useful synthetic substance.” Although nylon polymers are technically unreactive and not very toxic, certain persons who are allergic to petroleum-based compounds may react to nylon.

Nylon is not biodegradable and will last indefinitely in the environment.

What is it about nylon that makes it so popular?

Because nylon fibre is strong, elastic, and light, it has become popular among humans for manufacturing clothing for mankind.